Last week Duke scored seven. A 50th goal. The end of a first-round series. We had a 17-goal game and a new captain named.

In week eight of the Pats history series: The Pats’ strike for 20. Twice. A fifth straight shutout. Four shorties’ in one period? Yes, please. Derkatch adds to his league-leading stats. Five powerplay goals help power the Pats. That and much more.

1918: The Patricias ended their regular season with a contest against the visiting Tyvan Tigers. With the Patricias and Victorias both winning, the teams finished tied for first place forcing a sudden-death playoff game.

Back to the game, the Pats scored the first seven goals and took an 8-1 lead at the end of twenty minutes. The second was a little closer as the Pats managed just five goals to Tyvan’s two. With a 13-3 lead heading into the third frame the Pats kept pushing. Eight more goals were scored in the third with the Pats picking up seven before Tyvan rounded out the scoring. When you add that up, the Pats had a 16-goal advantage and a 20-4 final score.

Leading the way for the Pats was Willie Molisky. Molisky was in on seventy-five percent of the Pats goals, scoring half of them. He finished with ten goals and five assists in the contest. Duke Dutkowski also had himself a game scoring seven times. Captain and defenseman Bill Broadfoot scored once while adding four assists. Fred Harding had three points on a goal and two assists. Frank Broadfoot also scored a goal and added a helper. Walt Broadfoot was the winning goalie for the Pats.

1932: The Pats opened their two-game total goal League Final with a 7-0 win over the Regina Monarchs. After not allowing a goal in their perfect 4-0 regular season, their fine play continued into the playoffs. Nicknamed the Shutout King, Ken Campbell has now collected five straight shutouts in the Pats’ goal.

The Pats took a 4-0 lead into the second period. They added three more to their lead to go up 7-0 after 40 minutes. No goals were scored in the third period and the Pats ended up with the 7-0 win.

Pete Leminski opened the scoring for the Pats, which also turned out to be the winner. Defenseman Alex (Curly) Kerr scored twice to lead the charge for the Pats. Samuel (Moose) Stinson, Don Deacon, Earl (Sparky) Nicholson, and Ken Kipp rounded out the scoring in the win.

Max Bremmer played the full 60-minutes in goal for the Monarchs.

1970: The Pats scored five goals in the first period and coasted to an 8-1 win over the Saskatoon Olympics.

Gary Leippi and Ken Marit each notched hat-tricks in the win. Scott Smith and Rich Preston fired one goal each to round out the scoring. Smith also collected three assists to increase his league-leading total to 62 points. Defensemen Dwight Bialowas and Doug Marit also added three assists. Gary Bromley picked up the win for the Pats making 30 saves.

Bob Willis scored the lone Saskatoon goal on a second-period powerplay. Brian Young made 42 saves in the loss for the Olympics.

1983: Dale Derkatch scored four times and added an assist as the Pats beat the visiting Portland Winter Hawks 9-4. Derkatch now led the WHL in scoring with 61 goals and 75 assists. The game was a rough one that included 12 fights. Referee Glen Agar was busy, handing out 14 of 22 minors and five of 11 game misconducts to the Pats.

Special teams played a key role in the game. The Pats scored two powerplay goals to Portland’s one in the first period and a 5-2 lead after the period. Four shorthanded goals in the second by the Pats increased their lead to 9-2 heading into the third. Lyndon Byers, Derkatch, John Bekkers, and Doug Trapp notched the shorthanded goals in that order. Portland added two even-strength markers in the third to get them to within five but ran out of gas.

Taylor Hall and Jayson Meyer also found their range for the Pats. Todd Lumbard was tested 26 times backstopping the Pats to the win.

Ken Yaremchuk tallied twice while Grant Sasser and Ray Ferraro scored one each for Portland. Ian Wood faced 54 shots including 26 in the first period in the losing cause. 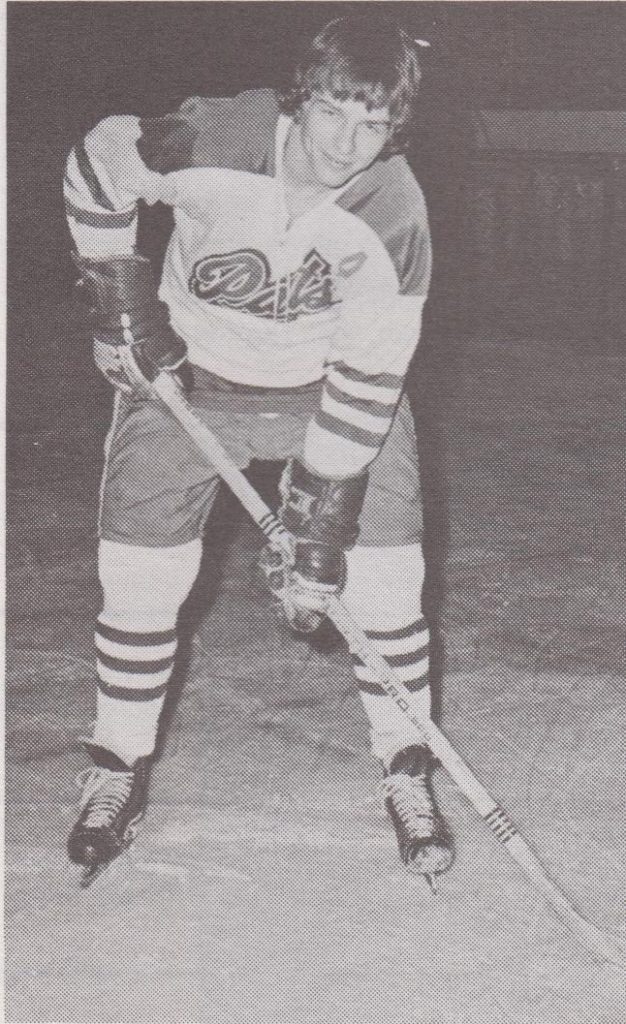 1974: Pats scored five powerplay goals on six opportunities in a 7-3 win over the Swift Current Broncos. The win pulls the Pats into a first-place tie with the Broncos.

The Pats led 4-0 after one period of play and that was all they needed in the win. Swift Current outscored the Pats 2-1 in the second to pull the Broncos to within three. Three more goals were scored in the third, two by the Pats and one by the Broncos. The 2,931 fans at the Stadium were left happy in the 7-3 Pats win.

Dennis Sobchuk was the big gun for the Pats scoring twice and set up three others. Clark Gillies also scored two. Mike Wanchuk, Bill Bell, and Rob Laird rounded out the scoring.

Eddie Staniowski made 32 saves in the Pats’ win.

Swift Current got their goals from Stu McLellan and Ian McPhee on the powerplay. Terry Ruskowski notched the other marker for the Broncos.

1980: The Pats beat the last-place New Westminster Bruins 10-2 before 2,474 at the Agridome. Mike Blaisdell led the charge scoring four times to increase his season goal total to 53 in 46 games.

The Pats took a 2-1 lead after 20 minutes. They then duplicated that in the second to take a 4-2 lead into the third. Six more goals by the Pats in the final period gave the Pats the 10-2 win.

Bart Hunter made 22 saves to record the win.

Daryl Stanley and Andy Ristau replied for the Bruins. Jeff Murdoch made 44 saves in the loss.

1923: Weyburn Canadian Standards and Efficiency Testing juvenile club traveled to Regina to play the Patricias. The Patricia juniors showed that they were in a class above the younger Weyburn team with a 22-2 win.

All seven Pats skaters scored at least one goal, led by Sil Acaster. Acaster scored eight times and added the same number of assists, good for a 16-point game. Harvey Naismith also had a top-notch game scoring seven times while adding four assists for 11 points. Emory Collins scored a hat-trick while Gord Cameron, Jack Gilhooly, Howie Milne, and Eric Pettinger rounded out the scoring. Jack Cunning got the win in goal for the Pats.

Roman Dreis and Gibson replied for the CSET. Tom O’Connell allowed all 22 goals in the loss.

It will be hard to top a pair of twenty goal games. But stretch drives, the playoff runs, and Memorial Cup appearances are on the way. Things are going to get interesting over the next few weeks.