When you talk about coaching and the Prince Albert Raiders, there’s only one name that comes up. ONE.

For those uninitiated, the man known universally as “Simpso” coached the Prince Albert Raiders to a record seven consecutive championships in the Saskatchewan Junior Hockey League before the franchise moved into the Western Hockey League and captured the Memorial Cup just three years into its existence, in 1985.

If there was ever a man with the Midas Touch, it’s Terry Simpson and his accomplishments in junior hockey led him to NHL stints with the Islanders, Jets, Flyers, and Maple Leafs, plus ownership of the Red Deer Rebels, and then back home for retirement in Saskatoon.

That’s where I reached him this week for a long-awaited telephone conversation which I’ve broken into two parts for DUBNetwork.

I should mention by the way, that Terry’s quite hallowed in my family because my Dad’s second hockey job was as a scout with those 1985 Prince Albert Raiders and it was his first championship ring.

When I became the Voice of the Prince Albert Raiders in 1993, the aura of Simpson still hovered over the city and all the winning the franchise did on Terry’s watch contributed to its reputation of being “Little Montreal”.

They love you win or tie up there.

Terry was the legend that you could actually talk to, or visit with in the summer because he resides in lake country north of P.A. like all the other hockey people.

So here we go with Simpso’s story, and to begin with, is it true that he’s an electrician by trade?

“Yeah, I still am!” Simpson laughed from Saskatoon. “I keep renewing my journeyman license in case I need some money one day, ya know?”

From there, the stories and laughs poured with the 77-year old hockey great. As the legend goes, Simpson had immense success as coach of his hometown senior hockey team, the Shellbrook Elks (44 km north of Prince Albert). Is that how it all began?

“Yeah exactly,” Simpson confirmed. “We were in the B division of the SAHA playdowns and we had some good players. We won it five or six years in a row and that’s right when the Raiders first came into the SJHL in 1971. They were having some trouble after their first season in ’71-‘72 and Team President Reg Martsinkiw came to Shellbrook and talked to me about going in there. That’s how I got started. He knew me from the Elks.”

To say that was a tremendous hire is an understatement. Terry Simpson guided the SJHL’s Prince Albert Raiders, playing out of the newly-constructed Communiplex, from 1972-1982.

“I think we were in there 10 years and won it all eight times,” Terry correctly remembered. “When we had those good teams and good players, a lot of our players were going down to American colleges so we were a thorn in the side to the Western Hockey League. They’d made a couple overtures prior to that to come into the WHL. For different reasons, we didn’t go. But after that last season when we went 57-3, fans were starting to lose interest because we were winning so much!”

It was clear the Raiders had outgrown the SJHL and it was time to move up to the Dub. However, it wasn’t anywhere near smooth at first.

“Through some various meetings we thought we should apply to the Western League so we did, and we were accepted,” Simpson recalled.

That first season in 1982-83, they might’ve thought it was a bad idea. The Raiders stumbled to a 16-55-1 record and were on the receiving end of some huge throttlings by the WHL’s big boy franchises.

“We got beat bad in lots of games,” Simpso frowned. “We went in with some of our Tier II players and some players we got from the defunct Spokane list. There were some good players on there, but they were young like Dan Hodgson, Dave Pasin, and Emmanuel Viveiros.

“We really took our lumps that first year but a lot of that was payback because we’d given out a lot of lumps in the Tier II days. Teams like the Blades and Pats and even Winnipeg really took it out on us. That I remember quite vividly.”

In season two in the WHL, the Raiders improved steadily to finish with a record of 41-29-2, and by the 1984-85 season, they were the best team in all of Canadian junior hockey.

They finished 52-17-3 in the regular season and captured the Memorial Cup by throttling the host Shawinigan Cataractes 6-1 in the final on national television.

“We had a real good team but we had a lot of depth too,” Terry explained. “We had some good secondary players like Dale McPhee, Ken Morrison, and Colin Feser. They weren’t NHL bound but we were led by Dan Hodgson, Dave Pasin, and Tony Grenier on the scoring end of it. We had a real good team and as I look back on it, I think it would’ve been hard to lose it because we had such a good team.” 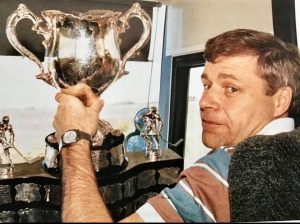 The 1985 Raiders ate up the Memorial Cup record book, scoring a tournament record 29 goals which still stands to this day. Dan Hodgson set a record in assists (13) and points (14) which also still stand.

But they were tough too. OMG were they tough, with the likes of Ken Baumgartner, Dave Manson, Rod Dallman, Dean “Caveman” Braham, a rookie named Curtis Hunt, and many, many more who could throw the dukes.

“We always had fairly aggressive, tough teams and in those days you had to be if you wanted to have success,” Terry said of his philosophy. “That was coming off the era of the Broad Street Bullies and all that. We always had tough teams and I don’t know, some people called me a goon coach, but I never sent any players out to fight or anything like that.

“But we were involved in a lot of fracases. Our guys were competitive! Plus teams wanted to knock us off and that was part of it but a lot of it was our own initiative too I suspect.”

Some of the best memories of my life were when the Raiders swung through Regina or Moose Jaw and my Dad would take me for a postgame meal with the team. I was 11. I learned the game by sitting at a table for four at McDonald’s with Simpso, Assistant Coach Rick Wilson and my Dad, listening to them talk strategy and evaluating players. I recall thinking “This is the life I want.”

NHL or otherwise, by the mid-’80s, Terry Simpson was becoming one of the biggest names in hockey due to his teams’ massive success. He was on national television regularly, lifting championship trophies. Clearly, the NHL was watching.

“In 1985 we won the Memorial Cup but I was also the coach of the World Junior team and we won that too,” Simpson continued. “In ’86 we came in second and I coached that team in Hamilton so I think I was getting known through that. But Gerry Ehman was the Islanders head scout and Assistant GM and he lived in Saskatoon. Of course, he saw us play lots and I think the word got through him to (New York Islanders bosses) Bill Torre and Al Arbour.

“I was attending the Memorial Cup in Portland in 1986 and I met Bill Torre there. One thing led to another, I went down to New York to interview, and it grew from there.”

Indeed. Terry Simpson was named head coach of the New York Islanders for the 1986-87 season.

Was it a culture shock being a guy from Shellbrook, SK (population 1,444), going to New York City? I guess it was!

“Of course you know how different it is Rod,” Terry confessed. “It was the difference between night and day. When I look back on it, it was quite a move. As a side note, when we got there the telephone company was on strike. We couldn’t get a telephone at our house for a month and there were no cell phones back then.

“It was a change for our family for sure. Both our girls came with us and they were in Grades 12 and 7 or 8. It was traumatic for them. For me, it was just basically life as usual except for the commutes because they were tough. But it’s still hockey so I was at the rink most of the time.”

To think this was going to be an easy transition from the WHL to NHL would be foolish.

These were the New York Islanders, who weren’t too far removed from winning four consecutive Stanley Cups and Terry was charged with leading them back there.

Remember how they love you win or tie in P.A.?

That’s nothing compared to the Big Apple.

The Rod Pedersen Show airs daily at 12:00 pm ET on Game+ TV in over 1.2-million homes across Canada and the USA. It’s available in Manitoba on Bell/MTS Cable, in Saskatchewan on SaskTel Max TV, in Alberta & BC on Telus Optik TV, and in Washington and Oregon states on TDS Cable. It’s also simulcast on Facebook Live and RodPedersen.com/ListenLive