Alan Millar is a busy man. With a delayed start to the 2020-21 Western Hockey League season (January 8), fans may think Dub staffers are sitting around twiddling their thumbs.

But I can assure you that is most definitely not the case. In fact, Millar’s been kept busy not only as the General Manager of the Moose Jaw Warriors, but also the defacto GM of Canada’s World Junior Team for this year’s tournament in Edmonton over the Christmas holidays.

“For me, managing the World Junior Team has kept me more-than-busy,” Millar reflected from his office at Mosaic Place. “As we’ve gone on with our ups and downs of a Return To Play in the Western Hockey League, we’ve been continuing to work through the process of trying to put a World Junior Team together.

“We’ve done a lot of video scouting on that front and a lot of player personnel calls. Working with staff, coaching staffs, I’ve been fortunate to work towards putting another team together and that’s a special opportunity.”

However, the stress of trying to put it all together, being responsible for dozens of players and staff, has meant some long hours. Fortunately for Moose Javians, the pandemic hasn’t been catastrophic for the majority of citizens.

“At the end of the day Covid, for the most part, has been okay in Moose Jaw,” Millar reported. “I think if you’re smart, use common sense, we haven’t had a ton of cases. I’ve been able to be in the office every day. I’m not one of the ones who’s had to be isolated or stuck at home. For the most part, it’s been okay. But, it’s been a long time since we’ve been on the ice or played a meaningful game. I understand the frustrations of our players and our fans but now that we have somewhat of a hard date (January 8) instead of a targeted date, there’s lots of excitement.”

Since I had Millar sitting in front of me, and given his influence with Team Canada, I just had to ask him if an invite to Exceptional Player, 15-year old Connor Bedard of the Regina Pats, is in the offing? There’s only been a handful of 15-year olds play in the WJHC over the years but since the Vancouver product is currently lighting it up in Sweden with players years his senior, has it been given any thought?

“You know what? He’s a special young player,” Millar smiled. “But he’s just not quite ready for that level. This is potentially a special group. The 01, 02 age groups are pretty strong. You’re talking Quinton Byfield, Connor McMichael, Peyton Krebs, Kirby Dach, Alexis Lafreniere. You talked on your show the other day about Lafreniere not being made available by the New York Rangers and he may not be, but if the NHL schedule is delayed, does something change there? I think Connor is gonna play World Juniors but getting consideration for that is probably one or two years away. For example (Exceptional Player) Shane Wright got a year in the OHL before he was considered for the World Junior Team and scored 39 goals. A year from now, I expect Connor to be in that thought process.”

By the way, we should clear up Millar’s role with Hockey Canada. He’s not officially the General Manager of Canada’s entry. I’ll let him explain…

“Hockey Canada has a Program of Excellence management group that I’ve been fortunate to be part of for three years now,” Millar reported. “I’ve managed our last two Hlinka/Gretzky teams in Edmonton and the Czech Republic and got the opportunity to move up. There’s a GM from each league that works with the U17, U18, and U20 levels. I’m the management group representative for the U20 team.”

As for Millar’s other team, the Moose Jaw Warriors, they hope their rebuild yields some results in 2020-21. They made a coaching change in January replacing Tim Hunter with Mark O’Leary and finished the shortened season at 14-44-4-0. They were 41 points out of the last wildcard playoff spot with six games to go so all that did was allow them to get a headstart on this season.

“All things being equal, it was a real young team last year as we know,” Millar sighed. “We still are working through that rebuild, whatever term you want to use. We had to get our house in order after 2018. Things just went off the rails in terms of that trade deadline as you remember. We made a significant deal to add Kale Clague that was going to catch up to us somewhere along the way. You don’t have a Luka Burzan as a young player in your group, and we traded away a couple of first-round picks. We had a plan where we moved Jett Woo and Brayden Tracey. All those things were to get our house in order, get some young players in our group, get our draft picks back, and try to build a team that can take another run.

“I think we’ve added good depth. I think our import players will be real important, obviously. We have to get them here but we anticipate Top 6 for them. I think there’s good depth throughout our lineup. We’ve got some real good players starting to come in. Brayden Yager, I’d like him to play all five of his eligible games against Regina this year.”

That’s no small thing. The Warriors selected Yager #3 overall in this spring’s WHL Draft and signed him to a standard WHL Player Agreement on April 24. He’s the same age as Connor Bedard (15), and the comparisons have already started.

“(Regina Pats GM) John Paddock and I’ve talked about it,” Millar smiled. “We think the two best players in that age group are right down the road from each other. I think there’s a real respect between the two players and I think it’s going to be real competitive between the two. That’s part of the game and part of the entertainment the fans should enjoy. John, (Pats coach) Dave Struch, Mark O’Leary and I should have some fun with that! We’re gonna want Yager to spend some time with our team and get in some games.”

And at perhaps the most important position – between the pipes – Millar feels they’re in good hands. 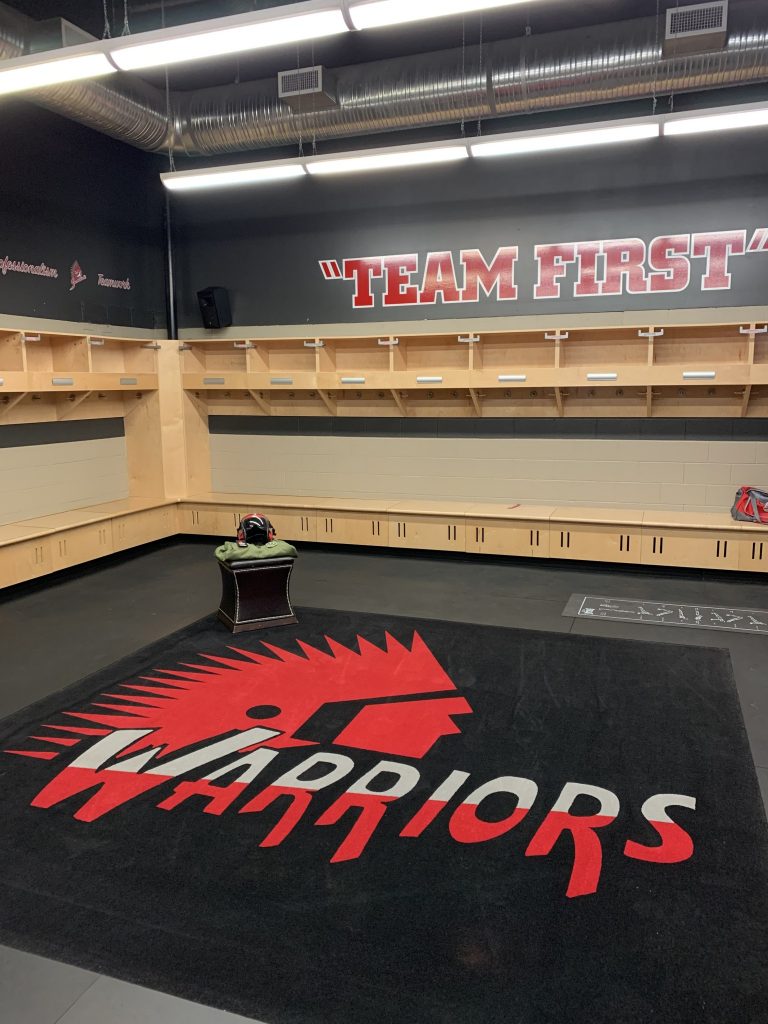 “I like where we’re at in net,” Millar continued. “We’ve got two solid 19-year olds and a real good 17-year old in the mix between Bilous, Gould, and Mirwald. We’re gonna have to work hard. We’re not gonna score naturally. But I think we’ll take a good step towards being a lot more competitive than we were a year ago. That’s where we’re at.”

When the WHL returns to play, it’s already been stated that all five Saskatchewan teams plus the two from Manitoba will make up one East Division and play each other exclusively. Some fans have grumbled that it’ll become monotonous seeing the same teams over and over, but I think it’s absolutely fantastic!

“First of all, I talk about entertainment,” Millar exclaimed. “I think we can have some fun with this! The reality is this is what we have. We don’t have any other options. For us to be able to return to play, for us to do it in the best interest of Health & Safety for our players, staff, fans, etc., this is what we have so let’s embrace it and have some fun with it. My feeling is that the most important people in the game are the players and the fans. I’ve really got the sense that they don’t care; they just want us to play. The players just want to play and whoever the opponents are in this unique season, I don’t think it’s a big issue. There’ll be some bumps along the way and emotion, and I don’t think there’s anything wrong with that. I think the fans just want to get back into the rink and get out of the house. It’s a social thing and I don’t think they’ll care a lot about who we’re playing. They’ll just be glad that the WHL’s back.”

WHL fans and season ticket holders – I’m one of them – are eagerly awaiting news on how we’ll be able to watch our favourite teams this season. Alan says that process is coming along, and they’re providing updates as best they can.

“We updated our season ticket holders two weeks ago with seven or eight key points that we wanted to give them a heads up on,” Millar stated. “You may not get your actual seat, we may be working with pods and cohorts, your family and close-knit friends, that sort of thing. Masks, social distancing, entering the building in one location, and exiting at another. We felt it was important to be transparent and start to get those messages out to our fans.

“We’ve still got some work to do in terms of what capacity will look like to start, as we know we’re working for up to 50% capacity with social distancing. What is social distancing within the rink and how you set it up? So we’re going through that. We’re one of the teams that doesn’t have season tickets on sale. We wanted to have the right information. We didn’t want to sell 2,200 season tickets and then only be able to have 1,400 in the building. So at the end of the day, we’re gonna try to put a plan together that looks after our season ticket holders, accommodates as many fans as possible but the reality is that we’re not going to be able to take care of everybody based on our average attendance for the past number of years. We’ll do the best that we can, plans are forthcoming, and it’s going to be a limited amount of tickets so season tickets should be a priority.”

The Rod Pedersen Show airs daily at 12:00 pm ET on Game+ TV in over 1.2-million homes in Canada and the USA. It’s available in Manitoba on Bell/MTS Cable, in Saskatchewan on SaskTel Max, in Alberta & BC on Telus Optik TV, and in Washington and Oregon states on TDS Cable. It’s also available on Facebook Live and RodPedersen.com/ListenLive