1 – The leaves have long turned orange and gold here in the Wheat Province and several have already fallen off the trees. That’s a sure sign that it should be hockey season around here but as we all know, it isn’t.

After bathing my Capital GMC Terrain at SUDS Full Service Car Wash this week, a young attendant I always chat hockey with chased me down in the parking lot. “This is BS!” he huffed as he smacked the shammy across his leg. “I want to see Connor Bedard! When are we going to see Bedard?”

That’s when it hit me that we aren’t just getting robbed of watching junior hockey by current Covid controls, but we’re also missing out on the 15-year old Exceptional Player season of one Connor Bedard (who’s currently dazzling in practice with a Swedish junior team).

2 – Mayyyyyyyyyybe we won’t miss out on Bedard’s Exceptional season entirely if the WHL is able to begin play in December, as planned. That’s only two months away and for the moment, it doesn’t look like the government will change any of its measures. However there are two things I can see that the WHL has going for it: 1) the QMJHL opened its season Friday night with no apparent problems and 2) eight months into the pandemic, health officials are realizing – due to high recovery rate statistics – that this virus perhaps isn’t as deadly as they originally thought. Maybe over the next 60 days they’ll relax things a bit, and allow for 50% capacity in arenas which is what the WHL needs to survive.

3 – I burst into a smile when a text message came into The Rod Pedersen Show from the 403 area code during Friday morning’s show. It read: “I see you still have a face for radio 🙂 — Shocks”. That could only be from ONE person: Parry Shockey. aka Parry S. Hockey. As in, “Shockey’s the name, hockey’s the game!”

The famed hockey coach from Barnwell, AB coached in the Dub from 1994-2005 with Spokane, Lethbridge, Regina and Moose Jaw and along the way, led the Hurricanes to the 1997 Memorial Cup final in Hull, Quebec. He also spent some time scouting for the L.A. Kings.

Shocks was watching the show Friday morning in Alberta on Game+ TV on cable carrier Telus Optik TV. I wrote the number down and can’t wait to call him this weekend! It’s been over a decade since we chatted. In my time with the Pats (1995-2010), Parry led the team to the most wins in a season in that period (46 in 1997-98).

4 – It was a treat to welcome distinguished WHL alumni Haydn Fleury (Red Deer 2011-2014) and Cale Fleury (Kootenay, Regina 2014-2018) to The RP Show this week. The brothers from Carlyle, SK are spending the NHL off-season in Calgary and are awaiting word on training camps for the 2020-21 season. They’re getting a lot of golf in and reflecting on their time in the NHL Toronto playoff bubble this summer where Haydn toiled with the Hurricanes and Cale suited up with the Canadiens.

“After the first five days I think we saw each other a lot more,” Haydn said of time spent with his little brother. “We went out for dinner a few times but he always seemed to be at the golf simulator. Any time I tried to get on it, he was using it. I saw Cale as much as I could. I was thankful we had such a close team with Carolina that we were able to have a lot of fun and it made it very enjoyable. We made the best of the situation.”

Clearly the pair loves golf and have spent a lot of time on the two golf courses near Carlyle. Haydn’s best all-time score at White Bear is 79 while he boasted a 76 at nearby Kenossee. Cale’s best score was 81 at White Bear but he’s quick to point out he doesn’t have the benefit of year-round golf in Montreal like his older brother does in North Carolina. 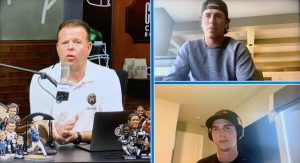 5 – Oh, and regarding another famed Carlyle product who went on to stardom in the WHL and NHL – Brendan Morrow – the Fleury brothers have a connection to the former Portland Winterhawk and Dallas Star. Morrow used to babysit them. THIS PROVINCE! Haha.

6 – Neither of the Fleury brothers’ NHL teams were Stanley Cup favourites but at least they both made it out of the Qualifying Round and into the Best-of-7 Quarterfinals. That’s where Haydn’s Hurricanes lost out to Boston and Cale’s Canadiens succumbed to Philadelphia.

“It was a positive experience, but obviously not the result we wanted,” Hayden reflected. “Everyone kind of had written us off a little bit against the Rangers because they’d beaten us all four games in the regular season but we hadn’t played them since the trades we made.

“We played the hockey we wanted to and dominated that series. Going against Boston, I think it was a lot closer than a 4-1 series. We had the blow-up in the third period, and even the final game they had two powerplay goals and we couldn’t get one by him. It was a closer series than that, but our team’s gotten a lot better and we’ll only move forward from here.”

As for Cale’s Canadiens, Habs fans had their fingers crossed that Carey Price would lead them to their 25th Stanley Cup in these playoffs. In this weird and wonky 2020, who knows? Unfortunately for Montreal, it didn’t happen.

“Our team went in with the mindset that anything can happen, especially with the break that we had and we had a pretty strong belief in the guys we had in the room,” Cale reasoned. “Obviously with our backbone of Carey Price in net, if he gets hot, we can beat any team in the league. We just couldn’t find a way to get past Philadelphia.”

7 – More on the Fleurys in a moment because I’m fascinated by them but first, whenever the Brandon Wheat Kings take to the ice during or post-pandemic, they’ll have a strong team under new owners Jacobson & Greiner Group of Companies in Brandon.

“I look for us to be competitive,” said Head Coach Dave Lowry. “I think we have an understanding of how this group will have to play to be successful. We’re going to miss our goaltender (Jiri Patera), but I really believe the guys coming back know they have an opportunity that’ll present itself and they’ll have the chance to move into a starting position. Our young guys will be a year older and we have a couple potential first round picks. When training camp begins they’ll have the chance to go through that excitement and pick up where they left off.”

8 – If the plan holds that the 2020-21 WHL season will feature divisional-only play due to travel concerns, Lowry’s ready for it and perhaps up to 12 meetings with the rival Winnipeg ICE.

“I’m gonna tell you right now that we’ll be awfully familiar and now not only do you have one rival (Winnipeg), but you’re gonna have five,” Lowry smiled. “I really like our division. I really believe that the teams are all maturing at the same time and it’s going to be unbelievably competitive.”

9 – And finally the Fleury brothers have the distinction of both having played for host teams in the Memorial Cup. Haydn did it with Red Deer in 2016 and Cale did it with Regina in 2018. While neither had the opportunity to hoist the 102-year old trophy, they still have great memories of the tourney.

“We actually played the Pats that year in the second round and it went to seven games,” Haydn remembered. “That started, really, their four year run in the Dub. We ended up losing to Brandon so after two weeks of Brent Sutter practices – you can imagine how those were – we went up against Mitch Marner and the London Knights in the first game and got blown out 6-2. I remember thinking ‘oh no, is this what we’re in for?’

“That give us a little kick in the butt and we played really good hockey for the rest of it. We came up against a hot goalie in the semifinals from Quebec. But the city of Red Deer was buzzing that whole year and it was awesome. Those games were all soldout and it was a blast.”

The Rebels lost out in the semifinal, dropping a 3-1 decision to the Rouyn-Noranda Huskies.

The 100th Memorial Cup was waged in Regina’s Brandt Centre and after stubbing their toe in Round 1 of the Dub playoffs, the Pats made it all the way to the Memorial Cup final before losing 3-0 to the Acadie-Bathurst Titans.

“I think we went in there with low expectations on us,” Cale remembered. “We got eliminated in the first round by Swift Current and I think it went to seven games. They were stacked and ended up winning the whole league. We had a full month of just two-a-day workouts, skating, and a grind. We did everything we could to stay in shape.

“I think it paid off in the end because we were pretty good in the Mem Cup, obviously making the final. But we ran into the same situation as Red Deer and Haydn did; we ran into a really hot goalie from Quebec.”

10 – FUN FACT: The Regina Pats appeared in the inaugural Memorial Cup in 1919, losing out to the University of Toronto in a 2-game, total goal series by a score of 29-8.

The Rod Pedersen Show airs daily at 10:00 am MT on Game+ TV Network in over a million homes across Canada and the USA. It’s available in Manitoba on Bell/MTS Cable, in Saskatchewan on SaskTel Max TV, in Alberta & BC on Telus Optik TV and in Washington & Oregon States on TDS Cable. It’s also available on Facebook Live and RodPedersen.com/ListenLive.