In sports, we’ve grown to accept that injuries happen. However, as it turns out, they happen to your average Joe (Jesse in this case). Looking at my calendar, I haven’t released an article since my draft day recap. Now, normally, you could attribute this to flat out laziness or it being the off-season, fortunately, this time, I have an actual excuse. For those of you who have enjoyed the series, (maybe even some of you who think I’m insane) the reason for the delay was because of a shoulder surgery I underwent at the end of last month and have been in the process of recovering. Please accept my sincerest apologies for the delay. Now that, that is all cleared up; Let’s get back to this crazy list!

Next on my list is a player that earned himself Western Hockey League honors not only for his position, but for being considered the best player in the entire league in 1998-1999. That’s right folks, coming in at #12 is goaltender, Cody Rudkowsky.

Rudkowsky, from Willingdon, Alberta, Canada broke into the Western Hockey league in 1995-1996 getting into two games as a 17-year-old. His numbers for those two appearances was that of what you would expect from a rookie in the league, posting a 8.57 GAA and an .813 SV%. Luckily, this was not the norm for the young goaltender who would prove himself worthy as a WHL starter in the coming years.

As an 18-year-old, Rudkowsky split playing time with Jeff Blair. Cody played in 40 games during the season with an impressive 3.74 GAA and a solid .905 SV%. Rudkowsky’s style would very much become apparent during this season as he cemented himself as a calm and collected goaltender with the potential to take on the starting role in future seasons. Despite splitting time nearly in half with Blair that season, for the playoffs Blair was named the starter and Rudkowsky only got into one game during that year’s playoffs. Seattle’s season came to an end in the League Championship series that year at the hands of the Lethbridge Hurricanes.

Cody Rudkowsky went from being in a tandem in 1997 to being named the Thunderbirds starting goaltender in time for the 1997-1998 season. Before I get into his season and stats, I must tell you, on January 16th, 1998, the T-birds were playing host to the visiting Tri-City Americans. Roughly eight minutes into the game there was an altercation with Tri-City goaltender, Aaron Baker and Seattle forward Chris Thompson which drew the attention of Rudkowsky. What transpired next can only be described as one of the best goalie fights I’ve ever witnessed and is only one of the things that endeared Cody to Seattle fans. Here is the link to that scrap, https://www.youtube.com/watch?v=dtxXqYcSX84, you can thank me later. 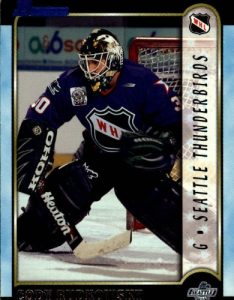 Anyway, Cody saw action in 53 games as a 19-year-old. His numbers would take a slight hit with the increased workload, as he posted a 3.74 GAA and .896 SV% for the season. He saw five playoff games; being eliminated by the eventual league and Memorial Cup Champions, rival Portland Winterhawks.

Rudkowsky returned to the Thunderbirds for his overage season in 1998-1999 and had a career year. Rudkowsky saw his starts increase from 53 in 1998 to 64 in 1999. Cody posted a record of 34-16-10, with a tremendous 2.89 GAA and an otherworldly .920 SV%. Cody’s season not only earned him the Del Wilson trophy as the best goaltender in the WHL but he was also named that years Four Broncos memorial trophy winner as the league’s most valuable player. Rudkowsky was also given the honor of top goaltender in the Canadian Hockey League in 1998-1999.

Rudkowsky would spend parts of 16 seasons playing between the ECHL and the AHL save for one start in the NHL for the St. Louis Blues, pitching a 30-save shutout.

DUBNetwork › Forums › Top 19 Thunderbirds; a completely subjective list you will certainly disagree with. #12