To get fans excited for the start of the regular season, we  put together what we think are the all-time teams based by division.

The four divisions we used were BC, USA, Alberta, and Saskatchewan/Manitoba. You can use any player from any era but the main rule is that they had to play the majority of the time in that division. That means if a player played in BC for three years and Alberta for two, they would count towards the BC team. Each team is compiled of 12 forwards, six defencemen, two goalies, and a head coach. Is there a player you think should have made the team? Which team do you think is best? We want to know what you think of these teams. Let us know your thought on our all-time team selections in the comment section.

Team BC has a great mix of skill and size. Led by the all-time greatest coach in WHL history Don Hay, this is a team that can take on anyone. With 10 Memorial Cup Winners and seven players with over 300 career points, this team would be hard to stop.

Although they only have six Memorial Cups between them, don’t underestimate this USA team. They have a solid defence and have one of the best goaltending tandems the WHL has ever seen. They are strong up front with seven 300 point scorers and are led by a great coach in Mike Johnston. The USA is here to play and won’t go down easy. 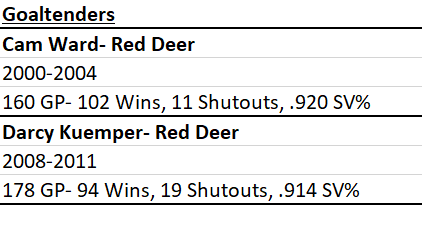 Led by Brent Sutter, Team Alberta has the ability to not only score but be extremely physical and wear opponents out. The defence is one of the toughest out there, and the offence can rack up the goals with ease. If you can get by their defence, you are in for a rude awakening with two rock-solid goaltenders defending the crease. This is a team any Albertan would be proud of. 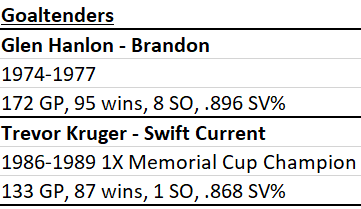 The Saskatchewan and Manitoba team has some of the greatest offensive weapons the WHL has seen. They feature 12 players with at least 300 points, with three of those guys playing defence. Led by legendary coach Terry Simpson, this team has the capability to put up a lot of goals. When you have six players who scored at least 400 points, you are going to be a problem for any team.