The Lethbridge Hurricanes continued life without some of their top scorers in back-to-back games this past weekend. The three players away at the World Junior Championships have now returned, and the team made a trade that brought back a familiar face but also said goodbye to another. With just two games this week — both against division rivals — it is important that Lethbridge puts up some solid performances.

Lethbridge traveled north to Calgary for a date with the Hitmen Friday night. This game marked the return of forward Oliver Okuliar who was away at the World Junior Championships with Team Slovakia. It also marked the return of Brett Davis who was acquired earlier in the week from Red Deer.

Okuliar had a goal and an assist while Davis added a helper to pace the Hurricanes to a 4-2 win. Carl Tetachuk made 22 saves for his team-leading 14th win. Noah Boyko earned first star honors in this game, scoring his 10th goal of the season and adding two assists for his biggest output of the season.

The Hurricanes returned home Saturday night where they welcomed the Swift Current Broncos. With them was former Hurricane D-Jay Jerome who was claimed off waivers.  This game was one-sided and it was the Brett Davis show. The Oakbank native scored his 10th and 11th goals on the season to help pace the Hurricanes to a 7-2 victory.

Bryan Thomson wasn’t overly busy, making 19 saves in the win — his 14th win in 19 career starts. It was a dominant effort by Lethbridge as they outshot the Broncos 34-21 and held a decisive advantage in the faceoff dot, going 32-25.

The Hurricanes once again will have a light week with just two games upcoming on the weekend.

On Friday, the Red Deer Rebels will make their final visit to the Enmax Centre this season. This will be a chance for Brett Davis to play against his former team for the first time since being traded to the Hurricanes. Lethbridge is 3-1-0-0 vs Red Deer.

On Saturday, the Hurricanes embark on a seven-game road trip, kicking it off by visiting the Medicine Hat Tigers. The Hurricanes have been unlucky vs their archrivals, going just 1-1-3-0 this season. This road trip will be Lethbridge’s longest stint away from home this season. They make stops in Moose Jaw, Regina, Brandon, Prince Albert, Saskatoon and finish it off in Red Deer.

Lethbridge welcomed back Oliver Okuliar to the lineup last Friday night in Calgary. He had been away at the World Junior Championships with Team Slovakia where he earned four points (two goals and two assists) in five games played. Slovakia was eliminated by Canada 6-1 in the quarterfinals and finished in eighth place overall. Okuliar served as team captain. 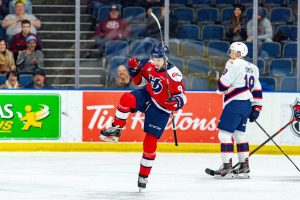 The Hurricanes will welcome back two World Junior Championship gold medal winners on Friday night. Dylan Cozens and Calen Addison will suit up for the first time since helping Team Canada win the title. The Hurricanes announced that there will be a pregame ceremony to honor the duo. Also, Cozens and Addison will be available for pictures and Autographs following the game.

Even while missing 12 games, Cozens continues to lead the Hurricanes in scoring with 46 points — just one ahead of Okuliar who holds the lead in goals at 24.

The return of Addison could affect Alex Cotton’s minutes a bit, but Cotton leads the defensemen in scoring on the team and league-wide with 43 points in 42 games played. Addison is second amongst the blueliners with 29, tied with 20-year-old Koletrane Wilson.

Congratulations to rookie defencemen Chase Pauls who recorded his first-ever WHL goal on Saturday night. Chances are the young man will be returned to his AAA club with Addison coming back into the lineup.

NHL Central Scouting released its list of 2020 draft-eligible skaters, their midterm rankings. Among those listed were Hurricanes forward Oliver Okuliar at 117, defenceman Alex Cotton at 118, and forward Noah Boyko at 180. Goaltender Bryan Thomson was listed at 5 among goaltenders in the rankings.

Head coach Brent Kisio was asked about trade deadline day and his level of relief now that it’s past. “You know, we have such a good group here. And I think everyone kind of wanted to keep it the same way. We brought Davis, obviously played a great game tonight. And then we also have you know, a couple of guys from World Juniors still to return. So with Okuliar away for so long, Cozens and Addison away, just getting those three guys back is a big addition for us. So we’re happy about that.”

Coach Kisio also gave a quick update on Dino Kambietz who fell awkwardly vs the Hitmen. “Got a week now to practice so we’ll see how it goes. Hopefully next week he’s playing.” He went on to just call it lower-body injury.

When asked about how he feels about the trade back to Lethbridge, the Oakbank, MB, native kept it short but with a huge smile: “Super excited!”

DUBNetwork › Forums › This week in the Windy City: A look at the Hurricanes