Hockey Canada’s roster for the 2021 IIHF World Championship upcoming in Latvia leaked out Wednesday, and as usual, there are plenty of Western Hockey League connections.

Canada's roster doesn't look like a mind-blowing outfit, but this is a perfect opportunity for some lesser-known guys to put themselves on the radar.https://t.co/Ekf7l59CG8

The squad raised more than a few eyebrows, given that 10 of the 25 men named were born in 1999 or sooner, and includes 2002-born Owen Power, the University of Michigan defenceman projected to go No. 1 in the 2021 National Hockey League draft.

That said, given the clearly difficult nature of the NHL season due to the Covid-19 pandemic, the fact it is a team of extreme youth and mostly devoid of star power should not come as too much of a surprise: playing at the Worlds for Canada’s superstars is typically not a glamourous move.

It is a pretty Ontario-heavy team, but there are seven men on the list of specific interest to the WHL fan.

Former Red Deer Rebel Brandon Hagel had an excellent 24-point rookie campaign, taking advantage of the ice time afforded him while the Chicago Blackhawks transition from the glory days to the new era. Hagel, 22, also has the benefit of having started the year in the Swiss League with HC Thurgau, so the big ice surface in Latvia will not be a shock to him. The Morinville, AB-native put up over 300 points over his four-year career in Red Deer between 2015 and 2019, and so expect him to have an important offensive role.

Ex-Kelowna Rocket (and Notre Dame Hound) Dillon Dube had an up-and-down season, much like the rest of his Calgary Flames compadres. The speedster with two World Juniors under his belt can do it all, be it at wing or centre, in an offensive or shutdown role, so this is a great opportunity for Dillon to end the year on a high note and get his feet wet at the senior level for Hockey Canada. If you can skate, you’ll get a chance; and boy can he skate.

The third and final WHL-connected forward on the team is former Spokane Chiefs captain and Los Angeles King Jaret Anderson-Dolan. Anderson-Dolan was teammates with fellow Team Canada-men Maxime Comtois and Michael DiPietro on the 2019 World Junior squad, and like on that team, I expect him to take a defensive role on this one. Nobody should expect him to have trouble accepting his role though, as he has been a leader at pretty much every level of hockey in his life, from Edge Prep in Calgary, through the Chiefs, and wore a letter for every Team Canada he’s ever played on.

The only true WHL connection on the blue line was literally JUST IN the WHL! Nineteen-year-old Braden Schneider is one of three teenagers on the team, along with the aforementioned Power and Winnipeg Jets forward and World Junior teammate Cole Perfetti. It is hard to fathom an argument disputing that Schneider was the best defenceman at the Subway WHL Hub in Regina, and he was an enormous reason the Brandon Wheat Kings finished first overall in the East Division. With only two professional games under his belt for the New York Rangers’ American Hockey League affiliate in Hartford, only Power is more inexperienced; but the complete game Schneider showed, complete with his physical maturity at 6-foot-2 and 210 pounds, clearly has the Hockey Canada brass believing he won’t stand out in a negative way against men. Will be very interesting to see how he’s used in the mix of the eight-named defencemen.

Troy Stetcher, the Detroit Red Wings defender who figures to play big minutes at the event, has only a tenuous connection to the ‘Dub’. Stetcher, a grizzled vet in this group at 27, chose the Junior A route with the Penticton Vees of the BCHL, and then a scholarship to the University of North Dakota, instead of playing for the Portland Winterhawks who picked him in the 2009 draft. Stetcher also has the benefit of a previous World Championship, playing for the silver-medalists back in 2019.

Also have to mention a very close personal friend of this writer, San Jose Sharks outstanding sophomore blueliner Mario Ferraro, who is a winner in every sense of the word, and has been beloved in every locker room he’s ever been in. His positivity, skating, and maturity will be great for this young group. He has no WHL connection, as he was an NCAA National Championship finalist with the University of Massachusetts a couple of years ago, but I’ll write about him if I want to! 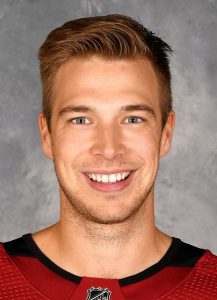 If there is one player on this team with even an outside shot at the 2022 Olympics, it’s Saskatoon’s own Darcy Kuemper. The former Red Deer Rebel and Spokane Chief draft pick has been an elite goaltender for his Arizona Coyotes for three years now and played in the 2018 World Championships. He will be Canada’s undisputed No. 1 at this tournament, and will probably have to be the tournament’s best goalie for Canada to get a medal. That Kuemper is here is great news, as the big 31-year-old dealt with knee injuries early in the campaign, which gave playing time to…

Adin Hill. Yes, the 6-foot-6 ex-Portland Winterhawk Hill got into 19 games for the Coyotes this past season and has been a regular call-up for Arizona the last four years. At a goals-against of 2.74 and a .913 save percentage this past NHL campaign, the Comox, B.C. native looks the better bet of the two understudies (alongside Vancouver Canucks farmhand Michael DiPietro) to get a couple starts at the tournament. Hill played in 121 games for very good Portland teams between 2013 and 2016.

He grabs the @pepsi shutout. pic.twitter.com/cu33mFFG2n

TSN plans to show every game of the tournament starting May 21, and Canada is set to open up on Day 1 vs the host Latvians at 10:30 AM MT. Find the full schedule here.