(Kent, WA) Tonight at the accesso ShoWare Center in Kent, Washington, the WHL announced further details about two events to take place in the spring of 2020.

“This is the first-ever tournament of its kind. We believe that it will become the premier Bantam tournament in the United States and will be held right here in Kent and will take place from February 20th-23rd,” Robison said.

Earlier in the day, the WHL announced that it will be a round-robin tournament where teams will battle for a U.S. Challenge Cup trophy.

“It will feature 12 of the top teams in the Western United States and Canada — seven teams coming from the U.S. and five from Canada. It’s going to be a great opportunity for these players to witness, for the first time in many cases, a Western Hockey League game on Saturday night as guests of the Seattle Thunderbirds with the Portland Winterhawks in town.” 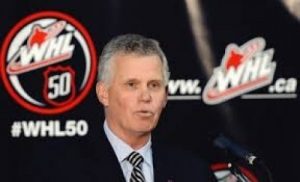 The teams attending the tournament will be the Yale Academy, the West Vancouver Warriors, the Okanagan Rockets, the Greater Vancouver Canadians and the Delta Hockey Academy Green from Canada. From the United States, the Seattle 14U squad will attend along with the 14U Alaska team, the L.A. Junior Kings, Phoenix Junior Coyotes, the San Diego Saints, and the San Jose Junior Sharks along with the Dallas Stars Elite’05s.

It will give an opportunity for the scouts and general managers in the Western Hockey League to evaluate the young talent in both the Western United States and Canada.

The games will be played at the ShoWare Center and at the Kent Valley Ice Centre.

“We are delighted to have this opportunity to come to Kent and be a part of this community and help grow this game. We think it will stimulate interest in minor hockey for the boys and girls of this area and to really showcase the Western Hockey League for these players who will be coming from across the United States and Canada.”

Guy Flaming wrote last month on this site that he had heard about the possibility of a two-round American Draft for WHL teams.

Robison confirmed that a draft of American players will occur.

“We are very pleased to announce that we will be conducting a U.S. Prospects Draft. Two rounds for U.S. players only, following this Bantam tournament. So it gives you some idea to the caliber of players that will be in this event and be selected and be part of the protected list for each WHL club moving forward.”

With such a huge section of the area they cover being in the United States, the WHL has not seen a very large number of American-born players come into its ranks.

“We feel it’s really important to begin identifying more U.S. players. We have less than 10% of our rosters made up of U.S. players. We have a very strong U.S. Division with five teams. We want to build on our U.S. talent. With 22 teams, we have lots of room for the high caliber talent. We feel this tournament will help us identify that talent and convince them that the Western Hockey League is the right path,” Robison said.

There are some teams that have found more success in recruiting U.S. born players. The Portland Winterhawks have nine American players on their current roster, the Everett Silvertips have six, and the Seattle Thunderbirds drafted four U.S. players in the 2019 WHL Bantam Draft.

This tournament and the subsequent draft, taking place in March, would seemingly give more of an opportunity for some other WHL teams to recruit and draft players from the lower 48 and Alaska.

“We will be getting more details out in the new year, but we are working with our general managers on how we are going to format it. It will be two rounds. We will have our regular draft in May but the majority of U.S. players will be selected in these two rounds. I think that this really makes a commitment from all of our clubs to begin recruiting players. Some teams have a lot of success in that area, and we think that all 22 WHL clubs should be more active in that area.

No word yet on more details like the order and whether these picks can be traded, among other things. We will keep you posted.

Along with representatives from NHL Seattle, the city of Kent, and the Seattle Thunderbirds, Robison showed how committed he and the league he represents are at growing hockey in the Greater-Seattle region and the United States. This tournament and draft could very soon be an integral part of an ever more American WHL.