(Volume 8) We’re back after a couple of personally imposed “bye-weeks” with an abbreviated version here, some Western Hockey League news and notes from recent days and yesteryear. Proceed with caution.

1. It was nice to watch, even if it was from a distance, as the Medicine Hat Tigers got back in action after the abrupt halt on April 9 due to COVID-19 concerns. Kudos to the WHL and the Central Division teams for doing things right throughout this irregular season. The Tigers managed a 4-2 victory on home ice against the Red Deer Rebels in its first game back. After two more wins over Red Deer, Medicine Hat (12-3-0-1) is solidly in second place in the divisional standings, but the Edmonton Oil Kings at 14-1-0-1 are four points ahead of the Tigers. Initially, the schedule-makers had the Tigers and Oil Kings set to meet four times between May 1 and May 8 – twice in each city – to conclude this irregular season. But alas, that has also changed.

2. The WHL announced on April 21 a host of Central Division scheduling adjustments. The Tigers and Oil Kings will now meet three times this weekend, with a game in the Alberta capital tonight and a return engagement Saturday in the Gas City. The teams will square off in Edmonton again on Sunday. The Oil Kings have won both meetings between the teams this season. However, Edmonton will be without Dylan Guenther the rest of the way, as the phenomenal forward is in Texas getting set for the IIHF World U18 Championship as a member of Team Canada. If the Tigers can narrow the gap in the standings, and both teams continue to take care of business during the next couple of weeks, their meeting in the final Central Division game of the irregular season on May 6 in Medicine Hat could potentially serve as a championship game of sorts.

3. Despite the overwhelming consequences associated with defending against the Medicine Hat power play, Central Division teams continue to take too many penalties against the Tigers. Moving along at a 45-percent clip, the Tigers are tops in the WHL while playing with a man advantage. Medicine hat has scored 27 times in 60 opportunities with the man advantage. The Tigers have given up one shorthanded goal, but have scored two shorties. Medicine Hat ices a veteran power-play unit with 20-year-old forwards Brett Kemp and Ryan Chyzowski, along with overage defenceman Cole Clayton. Corson Hopwo and Lukas Svejkovesky round out the number one unit that gives opponents fits. On occasion, the Tigers have also employed a power-play unit that includes four defencemen with Clayton, Daniel Baker, Dru Krebs, and Eric Van Impe taking a turn together with the man advantage. The Winnipeg Ice is second at a 33.7-percent efficiency.

4. A nifty bit of history this past weekend as Willie Desjardins was behind the bench Monday at Co-Op Place against Red Deer for his 376th WHL career win. That moves Desjardins past Shaun Clouston as the winningest coach in the Tigers’ long and illustrious history. Desjardins has an extensive coaching resume in junior hockey, the minors, and the National Hockey League. I also recall his Hockey Canada stint at the 2010 World Junior Championship in Saskatoon, an event I covered in my hometown for the dearly-departed website, Hockey’s Future. Supporters in the Gas City can point to a number of exciting playoff runs with Desjardins at the “helm”, but I kind of cling to the excitement of that WJC, where he coached an exciting Team Canada that dropped a 6-5 overtime decision to Team USA in the gold medal game.

5. At the “helm”? Maybe Tigers fans saw what I did there? Well yes, that’s another Willie Desjardins story from my mixed bag of media adventures. Years ago from Kelowna, prior to Desjardins departure to the professional ranks, I approached the Tigers for permission to interview a pair of prospects – Darren Helm and Cam Barker – when the team rolled through the B.C. Division. Willie told me to meet them at the team hotel rather than the rink, which is a somewhat commonplace approach. After speaking with Willie that day, he told me, “Helmer’s a little shy.” So, I spoke with Barker first, who at that time was a pretty seasoned young guy with a microphone nearby. Then, Barker stuck around when I got started interviewing Helm, a rural Manitoba kid who at the time still seemed like a raw rookie, even though he’d celebrated his 19th birthday on that road trip. Helm did just fine – he kind of loosened up when I wished him a happy birthday – he interviewed very well, even letting out a couple of chuckles. Helm was a ninth-round WHL Bantam Draft pick, then a fifth-round NHL Draft pick, and was a mere 21-years-old in 2008 when he had his name engraved on the Stanley Cup as a member of the Detroit Red Wings.

6. I found another tidbit – from Desjardins playing career. Willie was the captain of the University of Saskatchewan Huskies’ 1983 national championship team. During its undefeated playoff run that season, the Huskies swept the University of Alberta Golden Bears to advance to the CIAU Championship tournament. In three games there, the Huskies dominated the tournament, knocking off Brandon 6-2, Wilfred Laurier 10-1, and Concordia 6-2.

Believe it or not, this is the only edition of the Huskies to win the national championship, where the winner earns the David Johnston University Cup. That’s right – a grand total of one for what is often referred to as a storied and dominant program. In many ways, that’s a true statement. But yes, only one national title! Prior to that 1983 post-season, the Huskies had lost in the national final game to the University of Moncton in 1981 and 1982, surrendering last-minute goals in each defeat. Here’s a cool picture of that group. There was plenty of WHL presence from that championship team’s roster, with the likes of Desjardins, Peter Anholt (Lethbridge), and Kerry Preete (Portland) who are still involved to this day. If you dig deep enough into that three-year run by the Huskies, another familiar name pops up as a member of the coaching staff. That is current WHL commissioner Ron Robison.

7. The Kelowna Rockets got back in action on the weekend in a big way, handing the Prince George Cougars a 7-5 setback at the Sandman Centre in Kamloops. With Trevor Wong enjoying a most productive evening, scoring four times, I wandered down memory lane, recalling the night when the youngster endured his first post-game scrum in Kelowna. It came after his fourth WHL game, the night he scored his first WHL goal in a gutsy 2-1 overtime win by the Rockets over the Kamloops Blazers. The Rockets coaching staff had the 15-year-old Wong on the power-play unit that night and afterward, I found his comments insightful, suggesting he appreciated the opportunity to learn about the penalty-killing tendencies of the opponent. My game coverage piece for the Kelowna Daily Courier is right here. This was also the night Kelowna fans were introduced to one of the Blazers’ fine young prospects, Logan Stankhoven, who I also spoke with after the game. I had watched Stankhoven that very weekend at a bantam tournament in Kelowna, where he was just outstanding. As the Blazers boarded the bus for home following the loss in Kelowna, Stankhoven did not accompany the team. Nope. He had a game the next morning at about 8:00 am with his bantam team, which of course, he dominated.

8. I got burned after that Feb. 2, 2019 contest in Kelowna. Sometimes it’s better to let the brain fully function before allowing one’s mouth to engage, isn’t it? The Rockets win that night opened a seemingly insurmountable lead in the standings over Kamloops and I opined aloud to Gavin Hamilton, Rockets VP of Business Development it “might have been a $250,000 victory.” I had rationalized it looked to be a certainty Kelowna had clinched a playoff spot and home-ice advantage in the first round. Draw 5,000 fans at say, $20 a ticket, and that’s $100,000 per night in revenue. Three home dates during the first round, that’s $300K! Alas, the Blazers went ballistic for the rest of the regular season, an impressive run to track down the Rockets in the BC Division standings. Kamloops would force one of those somewhat rare tie-breaker games, where they handily dispatched the Rockets 5-1 at Sandman Centre. Yes, an expensive lesson!

9. Burrowing further on down that rabbit hole, as the tie-breaker gameday arrived on March 19, 2019, three days after the regular season concluded, I had been asked to work the radio broadcast as a color analyst. I declined, given my tight deadline to file a game coverage piece for the Kelowna Daily Courier, which was paying my bills for the trip to Kamloops. We decided on an intermission interview instead. Now, I’m sure I’m not the first person on the media side who has worked out of their vehicle, but there I was en route to Kamloops, pulled over on the Coquihalla Highway where I could find cell phone service, talking to Bruce Hamilton of the Rockets and Dennis Beyak from TSN. I wanted to gather intel that about their experiences together in a tie-breaker as members of the Saskatoon Blades in the late 1980s. That contest also involved Marcel Comeau, who eventually spent a few seasons in the Rockets organization. When I arrived at my hotel in Kamloops, I compiled my notes and was good to go with plenty of information related to the Rockets and tie-breaker games. Upon arrival at the rink, I was advised one of the regular color analysts had decided to make the trip to Kamloops and he would work the game and the intermissions. Alas, I was on the outside-listening-in to the first period intermission as I worked on my gamer, which is right here (Note: I don’t write the headlines.) The analyst had corralled one of his friends from the Blazers front office and, while side-stepping some technical issues, they spent the entire interview talking about Blazers forward Jermaine Loewen. During the second intermission, the “entertainment” consisted of a pre-game interview with a Kamloops personality talking about the Blazers’ good play during the final two weeks of the regular season. At the time, and since then, I guess I’ve found it interesting that during what was likely to be one of the most listened to broadcasts among Kelowna Rockets supporters, and perhaps the final broadcast of that season, the decision-makers chose to devote the two intermissions almost entirely to Kamloops Blazers topics. 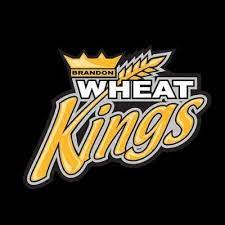 10. Speaking of WHL rivalries, how about the battle for the top spot in the East Division? The two teams from Manitoba kind of distanced themselves from most of the pack in the Subway Hub Centre, but they’re also having to contend with the Saskatoon Blades. At 16-3-2, the Brandon Wheat Kings record this irregular season includes four wins over the Winnipeg Ice (15-5-1). That’s right, the Wheaties held serve winning each time out against Winnipeg. You’ve got to think that will remain etched into the psyche of the group from the Manitoba capital heading into next season. The Blades (14-3-2-1), currently tied with Winnipeg three points behind Brandon, go at it against the Ice Friday night. At this point, a nice bit of crystal-balling by the WHL schedule makers has the final game in Regina’s Subway Hub Centre set for April 28 between Brandon and Saskatoon.

(Glen Erickson is a long-time freelance writer with ties to the WHL over the past 35 years and has published over 200 articles for DUBNetwork. He covered the WHL extensively in Kelowna between 2005 and 2019, in addition to four CHL Top Prospects Games and a pair of IIHF World Junior Championships. Erickson provided coverage of Rockets home games for the Kelowna Daily Courier during the 2018-19 season, before relocating to Medicine Hat.)