This is an ongoing series as we start the long road to the 2019-20 WHL season. We will be going in the order that teams were eliminated from contention. Keep in mind that the roster guesses vary because of information made available to us. We did our very best to capture all of the signings, but could be missing some. We now move onto the playoff teams.

2018-19 WHL Season: The struggle for 2017-18 was goal scoring and while Brandon Hagel and Reese Johnson had great overage campaigns, they still struggled at times to light the lamp. Red Deer suffered another long losing streak this year as well and had to fight their way into the last wild card spot after leading the division earlier in the season.

Their reward was the top overall seed, the Prince Albert Raiders. They played them tough but ultimately were swept away. A late-season injury to do-everything defenseman Alexander Alexeyev was a big loss and a blow to any upset hopes.

A mid-season trade for Brett Davis and Cameron Hausinger was expected to help their secondary scoring and it did at times. Both will be back and now are expected to replicate the overage seasons the previous dynamic duo had.

Ethan Anders played a lot in net for the Rebels and kept them in a lot of games. More consistency will be needed from him if the Rebels are to improve on their 2018-19 season.

2019 WHL Bantam Draft: As part of the trade for Davis and Hausinger, thy moved their first round pick to the now Winnipeg ICE. They also moved their third round pick in that trade and their second rounder as part of acquiring Dallon Melin from Victoria. Elsewhere they did pick up a third round pick and a second though, so they will still be making three picks in the first three rounds.

*=Did not play at least 10 games in the WHL last season.

Aged Out: Brandon Hagel and Reese Johnson had excellent overage seasons, both earning contracts with the Chicago Blackhawks. Jeff de Wit, another forward also moves on from the WHL.

Going Pro: The Washington Capitals signed their first round pick Alexeyev, meaning he will not be back for an overage season.

Overage Shuffle: Taking Alexeyev out of the group, you are left with the two forwards they traded for at the deadline in Davis and Hausinger and two d-men in Carson Sass and Ethan Sakowich. If all four are able to come back, it would seem unlikely that either Davis or Hausinger would be parted with, leaving Sutter to choose between Sass and Sakowich. 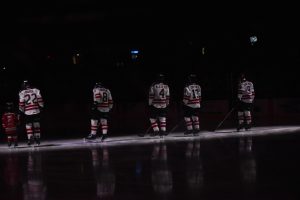 Import Issues?: Red Deer can and will make a pick in the import draft with Alexeyev being both a first round pick and an overage player. Oleg Zaytsev will return and will be hoping to build off of his 43 points, first year campaign.