As the Western Hockey league post-season winds down, it has become more and more apparent that the commitment to preparation by the participants is absolutely crucial.

The games become more meaningful, as the Ed Chynoweth Cup is firmly within reach.

The prospects are even more under the microscope, critically viewed in their familiar-looking jerseys during these high-intensity matchups.

Indeed, opportunities for career advancement are not taken lightly by the skaters or the decision-makers looking on.

And the pressure? We cannot dismiss the pressure. Without a doubt, it’s official, the heat is on. After all, every game can feel like an elimination game.

Of course, it is the referees we speak of here. That’s right – the on-ice officials.

GAMEDAY
“We prepare the whole season,” said Jeff Ingram, a 33-year-old referee from the lower mainland. “Once you get there, it’s almost easier to be calm, I find.”

“Everybody knows the pressure that everybody is under and I think because of that recognition, I find it almost easier to stay calm in those situations. It must be because we have been preparing our entire season, our entire career, for those situations.”

While the games are huge for players, coaches and fan-bases, the officials play an important role. And, believe it or not, there is much more on the line for them than many observers might think. The referees have a job to do and their performance is constantly under scrutiny.

“You have to be that calming influence,” Ingram said prior to working game four of the 2019 Rogers #WHL Championship Series between the Vancouver Giants and Prince Albert Raiders. “At the same time, no matter how many years you’ve been in the league, I think you still learn from every situation.

“When emotions are getting high – sometimes emotions get the better of us and we look back and think we could have handled things differently. Those situations are always different. In some way being able to find that inner peace and being able to bring the emotions down to where they should be.”

What Ingram speaks of, in a nutshell, is composure. The ability to take charge amid the mayhem that can ensue when the excitement and passion of playoff hockey hits a fever pitch.

Tom Kowal knows the feeling. Prior to retiring last year, he worked over 1,100 National Hockey league games between January 28, 2000 and March 31, 2018. The 51-year-old Kowal, who grew up in Vernon, BC, is now working in a coaching capacity with WHL officials.

“You have to have a routine and a mindset,” Kowal said when asked about gameday preparation. “When the world starts to collapse on those nights when the building is loud and the teams are a bit out of control, you have to be the calming influence.

The WHL takes the performance of its officials very seriously. It’s a “performance-based business”, according to Kevin Muench, the WHL Senior Director, Officiating.

GETTING STARTED
Many of the officials started young and despite the occasional speed bump, they’ve hung in to hone their skills and rise to the top of their peer group.

Continued improvement and efficient performance leads to many different types of opportunities.

For Ingram, that included officiating at the Memorial Cup and an opportunity at the World Junior Championship.

“I started officiating at 12 in Cloverdale minor hockey,” Ingram said. “It was really just to make some money. My friends were getting paper routes or working at McDonalds. That was really how it started.’

“Where it became more serious, around 17, I was invited to an above minor camp, an introduction to major midget and junior B. It was kind of an identification camp. I didn’t know what I was getting myself into to be honest. The very next season I started refereeing major midget and the next season it was junior B and then you start to see the opportunities there.”

For Kowal, it was a similar script.

“I guess my dad thought I had to learn a little respect for the game and respect for people,” Kowal said. “At the same time, once you start it, you find out it’s better than pumping gas. 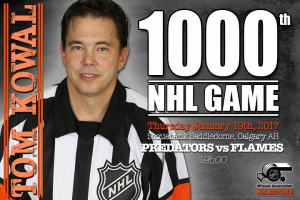 “As I moved along it became a group of friends at 14, 15 – guys you go to the rink with. It becomes your team, almost like a home to go into that dressing room. I think that’s where my passion came from. At 17 or 18, you get a chance and you think “I can do this”.

“I remember telling my dad at 17 that I’m going to referee in the NHL. He took me into the backyard and sat me down and said, “you can do it if you want, there’s only 16 jobs”.

THE HARD KNOCKS
For many youngsters, battling through the early years can be a make-or-break proposition. Many youngsters walk away, for various reasons.

“When we work with some of the younger officials in a mentorship role, that’s the biggest challenge they deal with,” Ingram said. “It’s very intimidating for a 12-, 13-, 14-year-old kid to have a grown man yelling at you on the ice.

“I remember, I almost quit after one incident at Cloverdale. But it was my dad who didn’t let me quit. So, if it wasn’t for him, I probably would have. He talked me out of it.

“Now, looking back, it makes you stronger. That type of abuse, it kind of changes as you get into the higher levels. It gets less personal and more about the game itself. And learning how to deal with that at an early age helps you in so many other aspects of life.”

Kowal agrees, and as a seasoned veteran he theorizes how the abuse begins, how misunderstandings might create some of the animosity toward minor hockey referees.

“I think what happens a lot, it’s the NHL games on television,” Kowal said. “The fans see what appears to be a player or coach yelling at a guy, and sometimes they’re mad, no question. But NHL coaches, WHL coaches…they have a level of respect for the officials the majority of the time.

“A guy sitting in the stands or watching television sees what he thinks is a coach berating a referee. But the coach is never crossing the line. So, now the guy goes out on a Saturday morning and he yells at the 14-year-old and crosses the line and calls him names, and he does the things that don’t happen at our level.

“Our people and the coaches, they very rarely cross that line. We’re not making it personal, we’re not calling each other names, but I think the perception translates poorly into minor hockey rinks.”

HOW THE GAME HAS CHANGED
The speed of the game is a frequent topic of conversation. And, players are often viewed as being bigger, more mobile and more skilled than those from days gone by. This has all had an impact on the game and naturally, the demands on officials.

Players and coaches are lauded by fans and pundits for decisions that relate to ice time. Professional leagues track “TOI” and media wags love to use the statistics to highlight the number of shifts a player plays.

But it’s the referees that do not leave the ice during play, charged in part with maintaining the flow of the game. Keeping up with top athletes is a necessity.

“Fitness has always been a focus ever since I’ve been in the league and that’s 10 years now,” Ingram said. “You have to be in good enough shape to skate and keep up with the game.

“That is something every kid now recognizes who is aspiring to get into the WHL. We see the young kids coming along now and they’re in as good of shape as the players.”

“It’s changed for sure,” he said. “Think back to the ‘80’s and ‘90’s – the game has changed so much. The fitness level and the pace they can play at. For awhile, they tried to play at that pace, but they just weren’t skilled enough.

“Now, those kids coming up, they’re skilled enough so now we can play at that pace with the hands and the skill to catch up. It’s just become a faster game.”

Coaches insist players excel at positional play. And given the need for speed, combined with the improved skills of the athletes, officials are also constantly working to find ways to establish position on the ice. While fitness is crucial, there is a method to the approach.

“For our guys, it’s about creating sight lines while on the ice,” Kowal said. “As the game’s gotten faster, officials had to get into better shape and skate to a level that can create the sight lines.

DO YOU SEE WHAT I SEE?
When officials begin to talk about sight lines and angles, it can be easy for us to lose interest, disengage and get back to doing what many observers and media like to do.

Whether it’s constructive or not, or even warranted, there seems to be a comfortable place among spectators where subjectivity rules the day and second-guessing runs rampant.

Officials by and large accept this reality and simply get on with the tasks that enable them to be the best they can be. But in fairness, there are many aspects that go misunderstood.

“Well, two things come to mind,” Ingram said. “Firstly, sight lines. People may not understand the difference in perspective from sitting 15 rows up to being at ice level and in motion. Even from a coach’s perspective, standing a few feet above ice level, their different sight lines from those angles are huge.

“It’s real easy to sit in row 15 and see a play while looking down – a lot easier than skating with the play.

“Secondly, our preparation. When I talk to people who are fans of the game but have no idea about the officiating side, they are always surprised and amazed at how prepared we are and how we have supervisors.

“We’re not just out there on our own doing games because we live five minutes from the rink. The organization of it all on our end and the preparation we do and our supervisors do – they’re amazed we go through all of this.”

RIGHT PLACE, RIGHT TIME
Referees will tell us all day long that they constantly strive to be in good position while on the ice. Of course, given the speed of the game and the size of the players, this is always challenging.

However, being in the right position to make the call is always the goal.

“If we’re not in position to see it (the play), the coach has an argument and we really don’t have an answer because we haven’t seen the play we need to see,” Kowal said. “I mean, you can never argue a referee that’s in good position. You can have the discussion on judgement, but you can’t argue it.”

That drive and determination is often overlooked. The effort to train, to understand how to get to the best position to view the play, takes commitment and experience. The best officials want to be there for the big games. They work hard to develop their abilities and aspire to earn the assignments on hockey’s biggest stage.

“One thing about the guys who excel in this business is they’re competitive people,” Kowal said. “They all come from different backgrounds and personalities, but there is an inside drive to be the best you can be.

“Once you’ve had a taste, that championship game or that playoff game you got, and then the time you didn’t get that assignment, it builds that inner drive.

“Refereeing – you really have to drive yourself.”

DUBNetwork Interview: Glen Erickson with Kevin Muench (May 8, 2019 at Langley, BC)