Dennis Cholowski suited up for 37 games for the Prince George Cougars earlier this season. Then he was dealt in a big deal along with the WHL rights to goalie Ty Taylor to the Portland Winterhawks for Ilijah Colina, Connor Bowie and some draft picks.

Tuesday marked Cholowski’s return to Prince George for the first time since being dealt and he marked the occasion by assisting on two of Portland’s first three goals to his the 50-assist mark for the year in their 4-3 road win in Prince George.

The Winterhawks knew not to take the last-place in the Western Conference Cougars as P.G. had taken both games at home against the B.C. Division leading Kelowna Rockets and one of two last weekend against the team right behind Kelowna, the Victoria Royals. 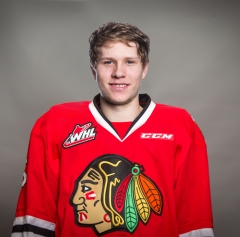 Just because the young Cougars had a poor record, obviously did not mean they were ready to mail it in just yet this year.

Portland was all over Prince George, out shooting them 43-23, striking a couple posts and just missing the net on countless occasions. The Hawks owned the possession, but struggled at times in finding the net behind rookie goalie Taylor Gauthier. The 17-year-old netminder stopped 39 of 43 in giving his young team an opportunity to steal a point or two.

They may have found their way to a win if not for former Cariboo Cougar Ty Kolle. The rookie broke a 3-3 tie in the third with 3:07 left in regulation to give Portland the only two points handed out on this night.

Portland opened the scoring with 6:07 left in the first when Ryan Hughes could not get a shot off and the puck trickled to Joachim Blichfeld, who had his back turned to Gauthier, Blichfeld spun to his backhand and Gauthier guessed he would go the other way. The result was Blichfeld’s 23rd this year and a 1-0 Portland lead.

Right before the first ended, Reece Newkirk netted his seventh this year. Conor MacEachern came out of a corner battle and got just enough of the puck to Newkirk, who had smartly read the play and jumped up enough to corral the puck and wrist a shot by Gauthier. Newkirk now has hit the double digit mark in his 16-year-old season.

P.G. got on the board in the second as Josh Maser took a feed in the slot and despite reaching out, got enough on a wrist shot to beat a scrambling Cole Kehler. The goal was Maser’s team-leading 27th this year.

18 seconds later former Everett Silvertips forward Ethan Browne came out of the corner with the puck and caught Kehler cheating away from the near post, for his first WHL goal. The former first round pick skated just eight games with Everett before leaving the team and ending up going to P.G.

Portland was up 25-15 in shots after 40 minutes and owned a majority of possession. Yet where it matters most, the scoreboard, the score was 2-2.

The Winterhawks did end up taking the lead back thanks to a solid defenisve play by Clay Hanus and a heads-up pass by Cholowski. He fired a long pass over to Glass, who passed cross-ice to Skyler McKenzie. After nine games without a goal, McKenzie finally netted his 42nd of the year, tying a career high he set a season ago.

McKenzie mimed throwing the monkey off his back after the goal.

Before the Hawks could add to their lead, Ilijah Colina scored a highlight reel goal to tie the game at three. Colina, who suited up in 83 games over a season and a half with Portland, netted his 11th this year, against his former team.

He made a slick move to get around former linemate Jake Gricius and then drove the net, firing a shot top shelf on Kehler.

After three goals over 37 games with Portland, Colina has eight in only 24 games with Prince George.

That set the table for Kolle’s game-winning-goal with just under three minutes left. Kolle beat Gauthier from the slot after Gricius put a nice spin move on a P.G. defender to get some space, then found Kolle, who drove in before beating the screened Cougars goalie.

The Hawks would then hold on for the 4-3 win.

Cole Kehler stopped 20 of 23 to get his first win since February 10th. He had dropped three straight starts since that win vs Seattle.

Both teams went 0-for-3 on the power play.

The two squads will finish out their season series with another game at the CN centre Wednesday night. With a win, Portland can take the season series three games to one.

Portland now is within six points of Everett for the U.S. Division lead and still has one more game in hand. The Hawks now have gotten at least one point in seven straight games, winning six in that span. If things go perfectly for Portland, they could be as close as two points back when the two get together on Sunday evening in Portland.