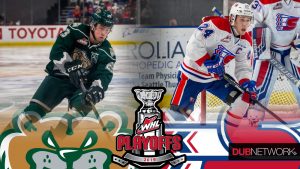 The Spokane Chiefs are in Everett ready to fire against the Silvertips in Game 1 of their Round 2 series. This is the fourth time these teams have matched up dating back to 2004, with Everett winning three of four series although all of them came in the first round.

The first round for these two teams were two different tales even though their series went the same length of five games.

Everett had an easier time if you will, handily winning over the Tri-City Americans. Dustin Wolf stood tall in goal, and the big pieces on the front end got it done.

In Spokane’s case, it was a lot of overtime and clutch goals to send them to Round 2 over the Portland Winterhawks.

Pointed out in the full series preview done by DUBNetwork’s Brandon Rivers, Everett dominated the regular season meetings between the squads going 6-0-1-1. Not a single regulation loss.

Storylines to watch in this series include:

Other games to watch: