Kindree out for at least 10 weeks

The Kelowna Rockets announced that forward Liam Kindree has undergone surgery to repair a broken collarbone and will be re-evaluated in 10 weeks’ time. The injury was sustained on a hit from Kamloops Blazers forward Ryley Appelt on Saturday. Kindree has played in 33 games with Kelowna this season registering eight goals and eight assists. 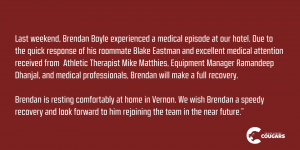 The Prince George Cougars issued the above statement about forward Brendan Boyle. According to the team, Boyle suffered a medical episode at the team’s hotel. Because of the quick response of his roommate Blake Eastman and the medical attention he received from Athletic Therapist Mike Matthies, Equipment Manager Ramandeep Dhanjal and other medical professionals, Boyle is expected to make a full recovery in the near future.

Oddly, Greig's travel to Hamilton that forced him to miss Wednesday's #BWK game doesn't count in his two-game #WHL suspension. Can someone please explain that policy to me?

According to Perry Bergson of the Brandon Sun, Ridly Greig’s absence from Wednesday night’s game won’t count towards his current two-game suspension as he was traveling to Hamilton for the CHL Top Prospects Game. That means Greig won’t be eligible to return until Friday, January 24th when the Brandon Wheat Kings play the Victoria Royals.

With Austin Pratt leaving Tuesday’s game vs. Portland and his unknown status for this weekend’s games, the Regina Pats have recalled forward Josh Paulhus from the SJHL’s Humboldt Broncos. The 17-year-old Saskatoon native has four goals and six assists in 31 games this season.

Manny Panghli! Our backstopper gets the call up for this Friday’s @blazerhockey game vs @TCAmericans. We’ll be cheering him on at the Sandman Centre at 7pm! #Blazers #Hockey #Goalie pic.twitter.com/5ZmjO8OR3K

The Kamloops Blazers have recalled goaltender Manny Panghli from the Thompson Blazers Minor Midget Hockey Club. He is expected to join the team for Friday’s game against the Tri-City Americans.

Multi-point performances from #NHLDraft talent representing each of @TheWHL, @OHLHockey, and @QMJHL.

The CHL held their annual top prospects game on Thursday night in Hamilton with Team White led by Kamloops’ Connor Zary (3 A), Prince Albert’s Kaiden Guhle (1 G) and Brandon’s Braeden Schneider (1 G) and Ridly Greig (1 A) defeating Team Red featuring Vancouver’s Justin Sourdif (1 A) 5-3. In between the pipes, Kamloops’ Dylan Garand made 10 saves on 11 shots in 29:43 of action while Moose Jaw’s Brock Gould made 27 saves on 31 shots in 57:29 of action.

Jack McNaughton is now 10th on the franchise all-time saves list with 1,653 stops! #25Together pic.twitter.com/fNUTMQxdB9

With 1,653 saves in the Calgary Hitmen crease, netminder Jack McNaughton has climbed into the top 10 on the all-time saves list with Calgary.

Are you traveling the prairies to watch your favorite hockey players? Take advantage of DUBNetwork’s hotel partnership! You can save 15% off the Best Available Rates when booking at HomeStay Inn & Suites in Medicine Hat; the HomeStay Express in Airdrie, or the Days Inn Swift Current. Phone to reserve your room and mention the Company Profile “DUBNetwork”. You can also give them a “follow” on Twitter, @HomeStayInnMHAT.

📺 We've had a change to our @JOEtvSeattle Broadcast Schedule. The game on February 22 vs. the @pdxwinterhawks from @ShoWareCenter has been added to the Broadcast Schedule and the game on March 21 vs. Portland has been removed. Full details ➡️ https://t.co/apZkCu5KKn pic.twitter.com/V5CUB5zUCw

The Seattle Thunderbirds have adjusted their broadcast schedule on JOEtv to include the February 22nd game against the Portland Winterhawks and remove the March 21st game against Portland.

Here are our jerseys for #WHLSuitsUp to Promote Organ Donation Presented by @remaxwesterncan Night!

The auction begins on Monday at Noon Sask. time with proceeds going to @kidneycanada.

📲Get the details on the Raiders App, or online here: https://t.co/hCOiiqAUqD#GoRaidersGo pic.twitter.com/BsHa3mDp5P

The Prince Albert Raiders have unveiled their jerseys for the annual WHL Suits Up to Promote Organ Donation night. The yellow jerseys featuring the vintage “Hockey Night in Canada” logo and will be worn on January 25th against Medicine Hat.

The Prince George Cougars will be offering “sensory kits” to fans that have sensory issues in partnership with Autism BC. The kits will include protective earmuffs, colouring books, crayons, earplugs, sunglasses, and other fidget/stress items.

Dylan Myskiw (85 GP, 2.87 GAA, and 0.902 Save Percentage with a 43-21-6-3 record with the Victoria Royals, Brandon Wheat Kings and Edmonton Oil Kings from 2016-19) has been suspended for eight games in the OHL for violating the league’s anti-doping policy. Unbeknownst to Myskiw, a post-workout supplement he had been taking contained a prohibited substance that led to the suspension.

Andrei Grishakov (139 GP, 30 G, 44 A with the Calgary Hitmen and Victoria Royals from 2016-18) has signed with Sokol Krasnoyarsk in the VHL for the rest of the season.

After taking the last two seasons off from professional hockey, Anders Lovdahl (84 GP, 10 G, 14 A with the Calgary Hitmen, Moose Jaw Warriors and Lethbridge Hurricanes from 1999-2001) has signed with Hedemora in Sweden for the rest of this season.

Home › Forums › Daily Dose of the Dub: Kindree out at least 10 weeks, Boyle has health scare and more