The Saskatoon Blades have signed 2019 fifth-round pick Ben Saunderson to a WHL Education Contract. Saunderson is currently with the Yellowhead Chiefs Midget AAA team in the MMHL where he has one goal and 17 assists in 27 games.

GAME OVER! 🇨🇦 gets its pre-tournament schedule started with a 3-0 win over 🇨🇭. 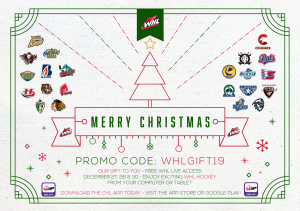 WHL fans will be able to watch games free of charge on December 28th, 29th, and 30th by entering the promo code “WHLGIFT19” on the WHL Live site.

The WHL & @OkanaganHockey are now inviting applications for a pair of 2020 WHL U.S. Development Combines!

The WHL will be hosting two U.S. combines in April of 2020 in Irvine, California and Las Vegas, Nevada has the league looks to expand its presence in the western United States. The combines will be open to players born in 2004-09 and those interested can register here. The WHL also notes that attending the combine will not impact a player’s NCAA eligibility.

#NHLJets have claimed Eric Comrie off waivers from the Detroit Red Wings. pic.twitter.com/X5DKrDCxFk

Eric Comrie (168 GP with the Tri-City Americans from 2010-2015) has re-joined the team that drafted him in the second round of the 2013 NHL Entry Draft after the Winnipeg Jets claimed him off waivers from the Detroit Red Wings.

Last but certainly not least! Josh Anderson with the powerful wrister to get his 1st goal and our 10th!#EaglesCountry pic.twitter.com/GiRG9p3zD7

Josh Anderson (206 GP, 9 G, 26 A with the Prince George Cougars and Swift Current Broncos from 2013-18) scored his first AHL goal on Thursday in his seventh AHL game.

Are you traveling the prairies to watch your favorite hockey players? Take advantage of DUBNetwork’s hotel partnership! You can save 15% off the Best Available Rates when booking at HomeStay Inn & Suites in Medicine Hat; the HomeStay Express in Airdrie, or the Days Inn Swift Current. Phone to reserve your room and mention the Company Profile “DUBNetwork”. You can also give them a “follow” on Twitter, @HomeStayInnMHAT.

Avangard is based in Balashikha, ~23 km east of Moscow, this season due to structural issues with their arena in Omsk.

Nikita Milyokhin (16 GP, 1 G, 3 A with the Lethbridge Hurricanes in 2014-15) requested and received his release from Russian club Torpedo-Gorky. In 29 games this year, he had three goals and three assists.

Hockey Canada has announced the 22-man roster for this year’s Spengler Cup and a total of seven WHL alumni will represent Canada this year:

Pittis to be inducted into Americans Hall of Fame

We will induct Domenic Pittis into the Amerks Hall of Fame as the Class of 2020! He will be officially inducted on Jan. 31st for our @SenecaCasinos Legends Night.

We are pleased to announce that Coyotes Alumni Carter Rigby has taken over Head Coach position. Welcome to The Den, Carter! https://t.co/CKXb1y80nl

Carter Rigby (226 GP, 70 G, 62 A with the Prince George Cougars, Kelowna Rockets and Swift Current Broncos from 2009-2015) has been named the head coach of the KIJHL’s Osoyoos Coyotes. This will be his first coaching gig after retiring from hockey in 2015-16).