Facing elimination, the Rebels needed a big win as the series shifted back to Swift Current.

Things did not start out well for Red Deer as Swift Current needed just 44 seconds to open the scoring. Before the opening period was at its halfway point, the Broncos power play struck and made it 2-0.

Red Deer was able to turn the tide a little bit before the end of the opening 20 minutes as Shawn McNeil scored short-handed to make it 2-1.

Late in the second period, the teams traded goals. First up was Brad Leeb for the Rebels, tying the game with his second goal of the playoffs. Swift Current struck back just over a minute later to regain the lead 3-2.

The third period was all Broncos as they closed out the game with a 5-2 win. This officially eliminated the Rebels from the playoffs.

Dustin Schwartz made 28 saves in the loss.

The Rebels led the series 1-0 as the teams lined up for their second game in Brandon.

It was the Wheat Kings that jumped out to a 1-0 lead early on a power play as they piled up 15 first period shots. Red Deer returned the favour by scoring a power-play goal of their own with less than three minutes left in the period. Frantisek Mrazek scored his first goal of the playoffs to tie the game.

The second period saw Red Deer pour it on, scoring twice including a power-play goal and the eventual game-winner. Both goals came off the stick of Kevin Marsh.

Dustin Schwartz made 35 saves in the win to give Red Deer a 2-0 series lead.

2000 – Closing out the season against the Kootenay ICE

Red Deer and Kootenay were destined for the playoffs and a four-game series against one another. Before that could happen, the teams needed to round out the WHL regular-season schedule.

Despite the valiant effort from the Rebels, it was the ICE that took this game by a score of 3-1. Red Deer’s lone goal came from Ukraine Import Alexei Zhurba. It was his only WHL goal.

All three ICE goals came from special teams as they were 2-for-10 on the power play and scored a short-handed marker with four and a half minutes to play.

Shane Bendera made 28 saves in the loss.

Red Deer already had a 2-0 lead in the opening round playoff series and were looking to take a win in Calgary.

Two quick goals late in the first period sent Red Deer on their way. Jason Ertl and Dion Phaneuf got the Rebels started with their first playoff goals.

A second period short-handed goal by the Hitmen made it 2-1, but the Rebels wouldn’t let the Hitmen tie the game. In fact, they retook a two-goal lead when Shay Stephenson scored with about four minutes left in the second period.

Despite consistent pressure to find the tying goal and pulling the goalie, it was the Rebels who found the back of the net when the Hitmen pulled Gerry Festa. It was Boyd Gordon’s third goal of the playoffs.

Cam Ward made 24 saves in the win.

For the second season in a row, the Rebels and Hitmen met in the first round of the WHL playoffs. Red Deer had a 2-1 series lead heading into the night’s action.

The majority of action happened in the first period as Red Deer scored three times to Calgary’s single goal. The goals came from Colin Fraser, Derek Meech, and Justin Taylor. Patrick Wellar had the goal for the Hitmen.

The second period did not see any goals and the third period only saw an empty-net goal from Tyler Johnson.

Cam Ward made 28 saves securing the Rebels net for the victory and a 3-1 series lead. 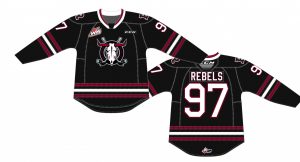 Red Deer was trying to stave off elimination in a tough opening-round series with Saskatoon. The Blades had won all three previous games by a combined nine goals to one.

Again Red Deer was able to hold off Saskatoon’s scoring for the opening 20 minutes and this time found themselves with a lead early in the second period.

Short-handed, Adam Kambeitz scored his first goal of the playoffs less than two minutes into the second period.

From there it was all downhill for Red Deer. The Blades had two, second-period goals, including one with the man advantage to take a 2-1 lead into the final period.

The third period didn’t take long to go south for Red Deer as the Blades scored twice more before the period was nine minutes old. They led 4-1.

Red Deer did get themselves another marker, with less than four minutes to play. Brett Ferguson made it 4-2 with his first goal of the playoffs. It wasn’t enough as Saskatoon sealed the game and series with a late empty-net goal.

Kraymer Barnstable made 32 saves in the loss.

The Rebels finished second in the Eastern Conference while the Oil Kings finished seventh. The gap was 35 points and it was expected the Rebels would be a contender in the 2010-11 season.

Red Deer got on the board early in their opening game with Edmonton, a power-play goal from Byron Froese about six and a half minutes into the game. Six minutes later, the Rebels extended their lead on a goal from Brett Ferguson. Near the end of the first period, Edmonton got on the board to cut the Rebels lead to one goal.

Edmonton scored late in the second period after dominating Red Deer on the shot clock, 19-4. The score was tied at two heading into the third period.

In the first 11 minutes of the third period, the Rebels and Oil Kings swapped goals. Red Deer’s came first off the stick of Andrej Kudrna at 8:20. Edmonton’s goal came at 11:08.

The final six minutes of the game were all Red Deer as Ryan Nugent-Hopkins scored twice in 1:06 including a power-play goal. The final score was 5-3 Red Deer. Darcy Kuemper made 34 saves in holding off the Oil Kings.

The Hitmen and Rebels were separated by just five points in the regular season. Red Deer finished in second in the Central Division, Calgary finished third.

Jeff de Wit scored early in the first period to open the game. It was the only goal of the first two periods as the teams continued to get a feel for each other’s game.

It took until after 14 minutes had passed in the third period before any more goals were scored. It was the Calgary Hitmen’s Keegan Kanzig that scored the tying goal.

But the Rebels weren’t done, specifically Adam Helewka. He scored twice in the final five minutes including an empty-net goal. Trevor Martin made 32 saves to preserve the win for the Rebels and a 1-0 series lead.

Lethbridge finished 12 points ahead of Red Deer for second in the Central Division. This gave them home-ice advantage in the first round.

They used home-ice to their advantage early in the game as they staked themselves to a 2-0 lead. Red Deer found themselves on the board late in the second period as Michael Spacek scored with less than two minutes left. Riley Lamb made 25 saves, shutting the door the rest of the way.

The third period was where Red Deer was flying. They scored three goals on nine shots as Cameron Hausinger, Brandon Hagel, and Lane Zablocki scored to give Red Deer a 4-2 win. Hagel’s goal was on the power play and Zablocki scored with four seconds left into an empty net.

The win gave the Rebels an all-important 1-0 lead in the series.