There certainly was a theme on the night at the Centrium in Red Deer. It was not a game that the coaches would be extremely happy about but the 5173 fans in attendance went home buzzing.

It did not take long for the home side to open the scoring. With just 6:47 off the clock in the first, the Rebels took the lead and didn’t look back.

An Ethan Sakowich point shot caromed off the post and the rebound headed right to Cameron Hausinger for a wide open net goal. Kootenay ICE starting netminder Jesse Makaj had no chance on the second shot.

Three minutes and 10 seconds later while shorthanded, Brandon Hagel and Reese Johnson rushed down the ice on a two-on-one. Hagel waited out the defender and slid a pass to Johnson. He made no mistake and beat Makaj for his 23rd goal of the season.

It was then the power play’s chance to extend the Rebel lead.

Twelve seconds into a Kootenay penalty, the Rebels struck again. Reese Johnson hammered a one-timer from the top of the circle to Makaj’s right and his second of the night gave the Rebels a 3-0 lead.

Before the period was out, the ICE cut the Rebel lead.

The ICE scored on a sloppy play in front of the Rebel net. The puck was directed to the net by Nolan Orzeck and it slid slowly under Ethan Anders’ pad. Orzeck’s second goal of the season made it a two goal lead with about six minutes to play in the first period.

Chase Leslie scored his first WHL goal early into the second period on a pass from behind the net. Leslie’s shot cam from the top of the circles in the slot and beat a screened Makaj.

Jeff de Wit added to the Rebels lead less than three minutes later. Zak Smith slid a puck from the far side to the front of the net and de Wit had his stick in position to redirect it beyond Makaj. It was de Wit’s 25th goal of the season.

With 12:42 to play in the second period. A strange bounce off the back boards went to Connor McClennon who directed it in front of the Rebels net. Jaegar White was open enough to collect the pass and deposit it behind Anders to cut the Rebel lead to three.

A scary incident for the Kootenay ICE, when with 11:05 to play in the second, Alex Morozoff hit a Kootenay ICE player and was given a five-minute major and a game misconduct for boarding. The player laid on the ice for a few moments before getting up on his own and making his way off the ice.

Connor McClennon closed the gap to two goals on the ensuing power play. Just 1:21 had expired on the five-minute man advantage before McClennon’s shot from the top of the circle to the left of Anders bent the twine behind the Pilot Butte, SK goaltender.

After the ICE negated their power play with two penalties of their own, the teams made it back to even strength.

It wouldn’t take long for the Rebels to score another goal. Carson Sass’ point shot hit Zak Smith in front of Makaj and it trickled through the goalies wickets. It was Smith’s 12th goal of the season.

More penalty trouble for the Rebels resulted in another puck in their net.

Connor McClennon’s shot from the top of the circle hit some bodies in front of the net and landed on the stick of Jakin Smallwood. His 13th goal of the year cut the ICE deficit to two goals.

14 seconds into another ICE penalty, Brandon Hagel collected a loose puck at the side of the net off a Dawson Barteaux shot. It was Hagel’s 40th goal of the season. He has scored the most goals in a full season as a Red Deer Rebels since Byron Froese had 43 in the 2010-11 season.

Head coach Brent Sutter was not thrilled with the play of his charges in the second period, allowing three Kootenay goals.

“I didn’t like our second. I thought we were sloppy and once we got up three or four goals I just thought we got away from our game and started doing things that you shouldn’t be doing, things you can’t afford to do at this time of the year.”

Rebels captain Reese Johnson agreed with the coach’s sentiment, “There were lots of turnovers we didn’t want tonight,” he said. “We were kind of loose the first two periods and that’s something that can’t be happening at this time of the year. But I thought we were better in the third.”

Curtis Meger entered the net for the Kootenay ICE after 40 minutes.

A much more defensive period was played as the teams settled down. Just the one tally was registered and it needed to go to review.

With a little over two minutes left in the game, Josh Tarzwell collected an errant Kootenay clearing attempt in front of the net and beat Meger to give the Rebels a four goal lead. The review came because a Red Deer Rebel had touched the puck with a high stick, but was then cleared from the crease by the ICE defender. The goal stood and the Rebels had taken an 8-4 lead.

“I liked our first period and I liked our third,” said Sutter, “I just thought we did some good things in the third with our structure and we didn’t give up much.” 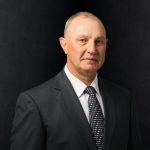 “I never thought about it until I came off and they told me to go back on the bench,” said the Rebels GM/head coach, who was saluted by the fans at the game’s conclusion.

“I don’t know. Just been around a long time,” he joked. “It’s really that at the end of the day.”

Rebel Yell…  Three stars were Hagel, Johnson and McClennon. Reese Johnson led all faceoff takers for the Rebels with a 17-for-25 record. Austin Schellenberg was 8-for-8 for the ICE. Dawson Barteaux directed 6 shots at the ICE net to lead all players, Johnson and Hagel had 5 a piece. Red Deer outshot Kootenay 39-27