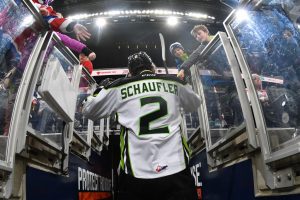 The two of them hadn’t been with the organization for long with Schauffler joining the team in mid-November after being released from the Prince Albert Raiders. He also had a brief stint with the Spruce Grove Saints of the Alberta Junior Hockey League where he dressed in 16 games, scoring 5 goals and 13 points.

The Dewinton, AB product typically played on the bottom pairing throughout his 39 game stay in Edmonton. With the Oil Kings needing to offload 2000-born players for next season, it almost seemed inevitable that he would be moved one way or another – especially with Ethan Cap and Wyatt McLeod both eligible to return next season.

It seems likely that we could see Schauffler back in a Spruce Grove Saints uniform next season.

The decision to release rookie forward Jesse Seppala was also made yesterday, putting an end to the Finnish forwards time in Edmonton. After scoring his first junior goal in the Oil Kings home opener, Seppala struggled offensively and didn’t add another point for the remainder of the season.

However, the Finnish forward did have a bit of bad luck which prevented him from developing his game much. Seppala was only able to dress in 17 games after suffering an upper-body injury which kept him out of the lineup for the majority of the year.

On eliteprospects.com it states that Seppala will be playing for HIFK U20s of the Junior A SM-Liiga back in his homeland of Finland.

The Oil Kings need to move down to three 20s for next season but currently sit at five with Scott Atkinson, Kaid Oliver, Ethan Cap, Wyatt McLeod, and Samuel Stewart still with the club.

They made one deal in April which saw David Kope get moved to the Kelowna Rockets in exchange for a fourth-round pick in 2023. Now, of course, most recently they released defenceman Loeden Schauffler.

Hill also opted to add to his 20-year-old group for next year by bringing in Kaid Oliver from the Victoria Royals. Oliver played in 51 games last season scoring 22 goals and 47 points and could potentially be the replacement for Riley Sawchuk on the first line.

With the decision to bring in Oliver, it seems as though Kirt Hill and Brad Lauer will go with two forwards and one defenceman as their 20s to begin the season.

You’d imagine captain Atkinson sticks around and then Oliver will be a top offensive threat for them. Then that leaves the decision of who to pick between Cap, McLeod, and Stewart, which is not an easy choice to make for any General Manager. The Oil Kings may also deal some of the excess 20-year-olds for draft picks in future seasons.