After keeping things close in the past two games since the 10-0 blowout in Game 1, the Giants were hoping to avoid getting swept on home ice.

The powerful Rockets had other ideas, giving themselves a 4-0 lead after 40 minutes.

Vancouver finally found themselves on the score sheet 3:22 into the third period off the stick of Jiri Jakes, but the momentum wouldn’t last long as Simon Ferguson got one right back just 15 seconds later to get their four-goal lead back.

The Giants were awarded 12 power plays in Game 4, capitalizing on just the one at 7:36 of the third period with a goal from Adam Courchaine.

The goal would be the last of the Giants’ 2002-03 season as Kelowna rung off three more goals to walk away with the 8-2 and the series sweep.

Kelowna would go on to win the 2003 WHL Championship, defeating Red Deer in six games.

The Giants were looking to close out Kamloops in front of the home crowd going into Game 5 with the first series win in their history on the horizon.

Kamloops came out like a team with their season on the line, leading 3-0 midway through the game.

Darren Lynch finally got Vancouver on the board 15:48 into the second period to cut the lead to two goals, though only for 29 seconds as future Giant Conlan Seder extended his team’s lead to three goals again.

Adam Courchaine got the Giants back within two goals 8:45 into the third period to get things rolling for the home team.

At 6:43 of overtime, Ty Morris scored his fourth goal of the playoffs and etched his mark in franchise history, sending the Giants to the second round of the playoffs with a 5-4 overtime win.

Aaron Sorochan stopped 23 shots while Devan Dubnyk had 20 saves of his own.

The series shifted to Chilliwack after the teams split the first two games, with the Giants’ win coming in overtime.

Defenceman Brendan Mikkelson opened the scoring early on with his first of the postseason, which turned out to be the eventual winner.

Milan Lucic also added his first of the playoffs to give Vancouver a 2-0 lead after 20 minutes, he added a second goal later in the game after Mike Wuchterl added a goal of his own to make it 4-0 and giving the Giants a 2-1 series lead.

Tyson Sexsmith had an 18 save shutout while Alex Archibald had 34 saves. 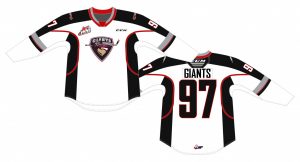 Vancouver outscored the Chiefs 14-8 during the two games in Vancouver and as the series moved down south, so did the momentum.

The Chiefs found themselves up 2-0 after the opening 20 minutes with goals from Reid Gow and Blake Gal.

Cain Franson got Vancouver on the board early in the second period to get his team back into the game.

There wouldn’t be another goal until the 15:56 mark of the third period when Spokane defenceman Corbin Baldwin gave his team a 3-1 lead.

That ended up being enough as Brendan Gallagher added a late goal for the Giants to give the Chiefs the 3-2 lead for their first win of the series.

Adam Morrison stopped 25-of-28 shots for Vancouver while Eric Williams had 26 saves.

The Giants settled for the split in Victoria after winning Game 1, with the series now shifted to the Langley Events Centre.

Vancouver came to play on this night, earning goals from Owen Hardy, Tyler Benson, Milos Roman, and Bowen Byram to take a 4-0 lead to the midway point of the third period.

James Malm added a fifth goal for the Giants late in regulation to win 5-1 and take a 2-1 series lead.

David Tendeck stopped 35-of-36 shots and Griffen Outhouse had 28 saves.

The Giants were looking to take a commanding 3-1 series lead after taking Game 3 the night prior.

Early on it looked like the visitors would do just that, jumping out to an early 3-0 lead into the early parts of the second period with goals from Dylan Plouffe, Brayden Watts, and Davis Koch.

Seattle scored four unanswered goals, two on the power play, to take the lead with just over four minutes remaining in regulation.

Despite skating with an extra attacker with the goalie pulled, the Giants were not able to tie things up, giving the Thunderbirds the 4-3 win and a tied series going back to Langley.

David Tendeck stopped 30 shots and Roddy Ross had 26 saves in the win.