Coming into this Game 5, neither team had strung two wins together in the series to that point. Kelowna took Game 4 in overtime to tie the series at two.

Blake Comeau opened the game’s scoring halfway through the first period on the power play, his first of the postseason.

Vancouver would score the next two goals starting with Adam Courchaine just a handful of minutes after the Rockets’ goal which was followed up by a power-play goal from Paul Albers early in the second period.

The second period scoring continued with Kelowna re-gaining their lead with a power-play goal from Lauris Darzins followed by Brett Palin scoring the eventual game-winning goal just 1:05 later to round out the game’s scoring.

Though the scoring was done with, the action was not, specifically at the game’s buzzer.

The rivalry boiled over resulting in 26 minutes of roughing minors assessed as well as five-game misconducts between the two squads.

Derek Yeomans had 21 saves in the 3-2 win for Kelowna while Marek Schwarz stopped 22-of-25 shots.

Vancouver came into Game 5 looking to close out the Cougars on home ice after winning the previous two games.

After Prince George opened the scoring early into the game, Gilbert Brule answered back about 90 seconds later for his fifth goal in as many games and the first of four unanswered goals from the Giants.

Milan Lucic rounded out the first period scoring to make it 2-1 Giants after 20 minutes before Spencer Machacek scored consecutive power-play goals less than two minutes apart, which would ultimately be the clinching goals.

Dustin Slade stopped 18 shots for the Giants while Scott Bowles stopped 36-of-41 shots. 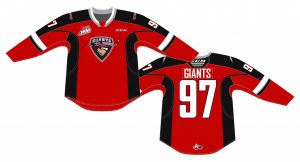 Vancouver found themselves on the verge of being eliminated in six games despite winning the first two games convincingly.

The Giants jumped out to the early lead just 1:40 into the game off the stick of Cain Franson, his fifth of the series. Spokane would even things up before the close of the opening period with a goal from Mike Aviani at 15:17.

Corbin Baldwin scored the eventual series-clinching goal with three seconds remaining in the second period while Mitch Holmberg got the insurance goal, with an assist from Aviani who had three points on the night.

Spokane would end up being eliminated in the next round in seven games by the Tri-City Americans.