With the COVID-19 pandemic causing shutdowns across the country, the CHL has come out with a new tournament to keep junior hockey fans engaged. The Memorial eCup is a tournament designed to find out which junior player is best at NHL 21. All 60 CHL teams, as well as four guest players, will compete in a single-elimination video game tournament to see who will reign supreme. Before the tournament starts, Trevor Longo who is the Vancouver Giants representation went over his strategy, history with the NHL video game franchise, and how he was chosen to compete in this tournament.

Introducing the premiere Memorial eCup presented by @KiaCanada. All 60 CHL teams are set to vie for #KiaCHLeCup supremacy!

Longo was selected by his teammates to represent the Giants. There were a few players that could have competed including Bowen Byram who is away with Team Canada, but Longo won the vote to represent the team.

Join us in cheering on Trevor Longo as he represents us in the Memorial eCup presented by @kiacanada. The fun begins at 4:25PM on Nov. 28 with Longo facing Max McCue of the OHL’s @londonknights!#KiaCHLeCup pic.twitter.com/aGldKfG2vi

Longo will be playing Max McCue of the London Knights in the first round of the tournament. The match is set for 4:25 pm PST on Saturday, November 28th. Longo does have some nerves going into this tournament but mostly is excited for the opportunity to play. “I’ve never really done this and I don’t really know how good my opponent is going to be so there are the nerves right there. However, it’s mostly excitement” Longo says.

When playing the NHL, there are two different strategies you can employ. The first one is an aggressive style where you focus on offense with aggressive forechecks and huge hits. The other strategy which Longo is planning on using is more defensive. You feel out your opponent, wait until they get frustrated, and then attack on the counter.

History with the Gaming Franchise:

Longo buys the game every year and enjoys playing with and against his friends. His team of choice to play with is the Toronto Maple Leafs. “I’m born in Toronto and most of my family is from Toronto so can’t go wrong with the Leafs. They had some big acquisitions this off-season so has to be the Leafs”.

Longo’s favorite game mode is EASHL. In this mode, you and five other players team up to form a team of individual players and compete against other teams from around the world. ” I like how you can just stick to one guy and play with your buddies. You get some teamwork and chemistry going so I would say that is my favorite game mode.

The game allows you to play with players from around the world and from different eras. Longo was asked to create his dream 6-man starting lineup for NHL 21. His forwards were Wayne Gretzky, Mario Lemieux, and Conner McDavid. This is a great forward group that combines speed, skill, and size in Lemieux’s case.

Next, we go to the defense side where Longo went with two current players. Morgan Riley and Alex Pietrangelo make up Longo’s backline. Pietrangelo is a strong defenceman who can throw big hits while providing offense. Riley is sound defensively but shines more on the offense. Longo picked Riley because of his Toronto connections. To make the team better, Longo could have chosen his teammate Bowen Byram or Canucks defenceman Quinn Hughes, but his selections make for a solid defense pair.

In goal, Longo went with one of the best goalies in the NHL and WHL alumni Carey Price. Price is as solid as you can get in goal and rounds out the team well.

Being in the Game:

Many who play NHL put themselves into the game by creating a character. Longo on the other hand can use his own designed by EA.

“It’s pretty cool. Some of my buddies will play with the Giants or as myself. In Be a Pro, you can actually be yourself so it’s pretty cool. When I was younger, I was dreaming about being in the game and being in junior. It’s pretty cool being in the game. I have done the Be a Pro mode in past years. I let myself get drafted. I’m a huge Leafs guy but you can’t force your way into a team. They got to want you so I go through the draft for sure”. 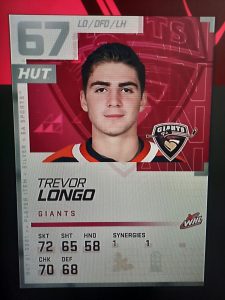 You can watch all the games on Twitch.tv, but make sure to check the CHL and team’s social media to find out which channel the game is broadcasted on. Viewers can win prizes by tuning in including a $1,000 Visa gift card. Check out the tournament, and help cheer on Longo as he fights to be named top NHL 21 player in the CHL.