In an absolute roller coaster of game the Kamloops Blazers found themselves down by two goals to the last place Prince George Cougars but fought back to earn a valuable point before losing in overtime 5-4.

Kamloops found themselves in an unfamiliar spot as of late, trailing early. Prince George’s Vladislav Mikhlchuck danced down the centre of the ice and dropped the puck off for defenceman Rhett Rhinehart who sneaked the puck passed Dylan Garand. 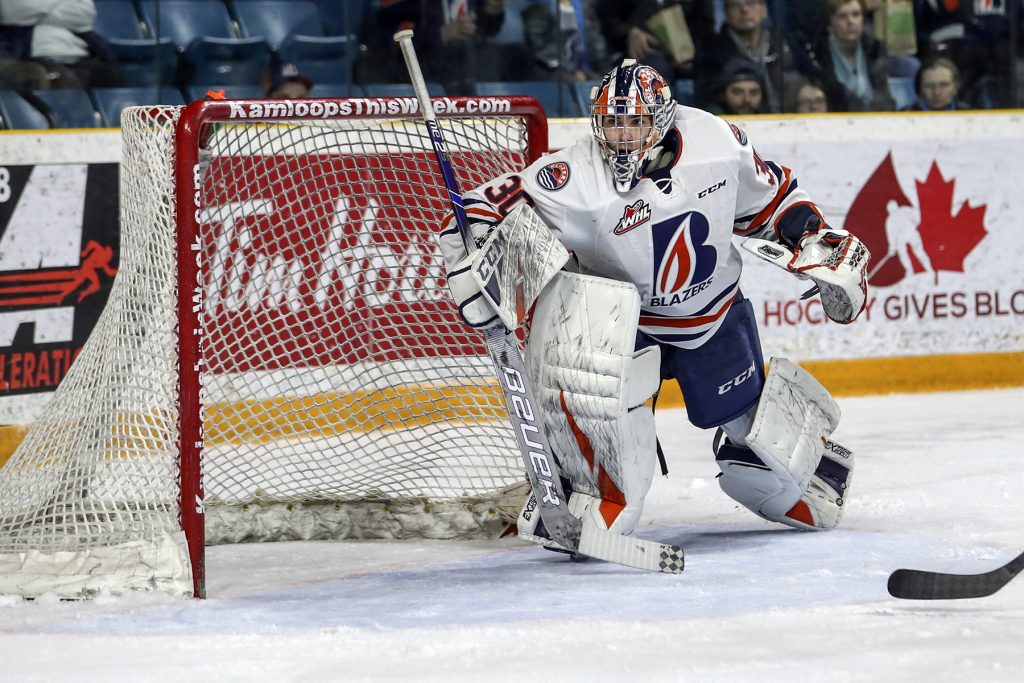 From that point forward the period belonged to the Kamloops Blazers who ended up directing nine shots towards Taylor Gauthier’s net.

They were able to get one of those attempts passed the draft eligible goaltender when Kobe Mohr scored his eighth of the season off a beautiful cross-crease feed from Connor Zary knotting the game up at one heading into the intermission.

The second period started as the first ended with the majority of the play in the Prince George end. Kamloops took the lead at the 4:59 mark when Ryley Appelt banged home his 3rd goal in as many games giving the home side a one goal lead.

The third period looked to be shaping up perfectly for the Blazers, that is, until the puck dropped. PG scored three goals before the half way mark of the period and led 4-2.

Things looked to have been de-railed, the Blazers made mistake after mistake and whether it was nerves, or something else, head coach Serge Lajoie commented on that after the game.

“We gave them a couple of gifts in the third period, those might have been errors out of wanting it so bad. or being a little nervous. We can’t have those mistakes tomorrow.” Lajoie continued “It was nice see them fight right until the end…I’m very proud how of our guys didn’t quit.”

After the media time out the play shifted. Kamloops was finishing their checks and the belief looked to have returned to their sticks.

On a power play, with under seven minutes to play, Kyrell Sopotyk found a loose puck at the side of the net and jammed it home cutting the Cougars’ lead to one.

Kamloops continued to push, throwing everything they had at the PG net knowing that salvaging at least a point could mean all the difference in such a tight playoff race.

With just under a minute to play, and Dylan Garand on the bench for the extra attacker, Connor Zary scored his 23rd of the year and blew the roof off the Sandman Centre sending the game to overtime.

More importantly, that goal meant the Blazers gained at least a point.

In overtime, not 20 seconds in, Jermiane Loewen broke in all alone, deked to the backhand, but couldn’t beat the outstretched leg of Taylor Gauthier.

After some back and forth play Prince George’s Vladislav Mikhalchuk found the back of the net for his 24th goal of the season and 4th point on the night to seal the victory for the team from the Northern Capital.

“We have had our biggest game of the year for six or seven games now. The guys are disappointed and that shows a high level of care, they will be ready to play. I don’t think much needs to be said… We proved to ourselves the last 10-12 minutes that when we play the game the right way we know how we need to play to beat PG.”

The Blazers handed out their end of the year awards. Among the winners was Jermaine Loewen for Grinder of the Year and Dylan Ferguson and Zane Franklin sharing the MVP award.

Well, the Blazers playoff hopes, that even just two weeks ago looked slim to none, come down to their final game of the season, game 68.

With a win tomorrow in Prince George, Kamloops clinches at worst, a winnrer takes all play-in game which would be played Tuesday night at the Sandman Centre.

Kelowna plays host to the Vancouver Giants tomorrow who, due to their win over the aforementioned Rockets, have nothing to play for any longer.

The Giants win combined with Everett’s shootout loss has settled the battle for first in the Western Conference with Vancouver on top. What’s this all mean? Well, this means Vancouver is likely to ice a lineup minus many of their best players. Don’t be surprised if the likes of Bowen Byram or Davis Koch find themselves at home on their sofas for tomorrow night’s game.