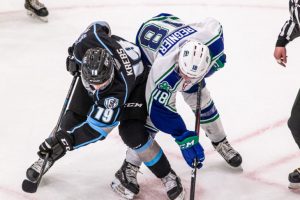 Peyton Krebs scored his first goal of the season and it ended up being the game-winner on Wednesday night as the Winnipeg ICE doubled up the Swift Current Broncos, 4-2, inside the Wayne Fleming Arena.

Fresh off a 7-3 loss the night prior, the Broncos hit the ice less than 24 hours later. Playing against Brandon on Tuesday, the Broncos gave up six third period goals. Wednesday’s contest would be no easier against an ICE team that continues to play good hockey.

In the end, the Broncos recorded just 16 shots and they dropped their 10th road game of the season in the process.

“I thought there were a few stretches where we played the right way. There were also times where we got out of our structure,” said James Patrick after the game courtesy of winnipegice.ca. “Their goaltender played very well.”

The first period brought nothing. Winnipeg only recorded eight shots after 20 minutes while the Broncos were able to muster just three.

Jakin Smallwood scored his seventh of the season to kick things off just 6:41 into the contest. A hard-working Swift Current team would bounce right back. At 9:14, Raphael Pelletier tallied his second of the season to tie the game up.

However, that wouldn’t last long. With 5:20 left in the second, Jackson Leppard scored his ninth goal of the season. Once again, the Broncos would bounce back. Just 1:59 later, Hayden Ostir netted his fourth of the season as the game was tied at two.

Matthew Savoie drew into the lineup for Winnipeg on the night and he quickly produced in the third on the power play. The rookie phenom got the puck over to Peyton Krebs and the Vegas Golden Knights prospect did the rest as he beat Isaac Poulter to give Winnipeg a 3-2 lead. That goal would end up being the game-winner.

Isaac Johnson officially sealed the game with a marker with just 2:34 left. It was Johnson’s ninth goal.

Jackson Leppard ended up with a goal and was a +2 on the night and he had this to say after the contest.

“We have to know every team in this league can win on any given night. We had a really good first, we took off the pressure a bit in the second and they scored a couple of goals,” said Leppard. “It was a good bounce back in the third for us.”

“We played desperate in the third, we sacrificed our bodies, killed some penalties and we all played together,” said Leppard.

“It’s good for us and it’s good for the fans. We’re playing good here and we’re looking to keep going.”

Winnipeg remains on home ice for another three straight. On Friday, they welcome Regina to the Wayne Fleming Arena and the Kamloops Blazers are in Winnipeg on Saturday. The homestand ends next Wednesday against Kelowna.

Swift Current will head home for two straight games. They play Everett on Friday and Lethbridge on Saturday.