There’s a smooth skating defencemen on the Calgary Hitmen’s top pairing that is starting to turn some heads after a lengthy time with the national program and improved play with his Western Hockey League club.

The Belarusian born Vladislav Yeryomenko is having a career season with the Hitmen and is starting to garner attention from the National Hockey League.

The 6-foot, 176-pound blue liner was one of 139 Canadian Hockey League players listed on the ‘Players to Watch’ list that was released by Central Scouting Nov. 15. He is the second Hitmen to be named to the list this season, joining Tristen Nielsen, who was given a C grade back in October. Like his teammate, Yeryomenko was given a C.

“I grew up watching the NHL, it is my dream and everything I am doing is to get there,” said Yeryomenko. “I want to play in the NHL one day. It would be a dream come true.”

Yeryomenko’s NHL viewing experience as a kid growing up outside of Minsk was notably different than the average North American experience. Once his busy hockey and school schedule was complete, Yeryomenko would stay up past midnight to catch Eastern Conference games on the weekend, fueling his desire to play in the NHL.

He wasn’t born with a hockey stick in his hands like a lot of NHL Entry Draft prospects. He started playing at six years-old and wasn’t exactly sold on the spot. To help nudge him in the right direction, his father took him to watch a game in Minsk one day. The impressive game play by the local team and a quick prep talk from his father ignited a passion that would take him halfway across the world.

As a 16-year-old, Yeryomenko performed at the 2015-16 Mac’s AAA Midget World Invitational Hockey Tournament in Calgary with the Belarus National U17 team. It turned out to be one of the most important years of his life.

Laying eyes on the slick right-handed defencemen was then Hitmen General Manager Mike Moore, who was scouting the tournament in his own backyard.

“We were fortunate to see him at the Mac’s tournament. We liked him, liked his skill level, puck sense and we were quite happy with his performance,” said Moore, who now serves as the vice president and alternate governor for the Hitmen. “To see how he worked with his peers at the tournament was important. We knew we needed a d-man and a puck mover. He’s been a great find for us.”

Later that spring, Yeryomenko was a picked up a pair of assists during the gold medal game of the IIHF World U18 Championship Division I final, when they skated to a 5-3 win over Team Germany.

A few months later, the Hitmen selected him with their first pick in the CHL Import Draft, when they nabbed him 46th overall.

“It was a great moment getting drafted by the Hitmen and one of the highlights of my hockey career. The CHL is the best junior league in the world. Lots of good players in the NHL played here and playing in this league will help get me better,” said Yeryomenko.

Making the transition to North American hockey easier was his schooling background. In the early years of grade school, Yeryomenko took four English classes a week, usually lasting about an hour, with exams at the end of the school year. 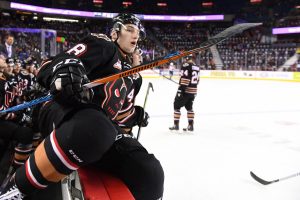 That same year, the Hitmen also drafted Andrei Grishakov, a Russian product, in the Import draft. Having the two debut in the same season for the hockey club wasn’t exactly planned, but it wasn’t exactly an accident either.

“It’s been great to have Yeryomenko around to help out Grish. Yeryomenko’s English is much stronger than Grishakov’s, so they are able to hangout and help each other out,” said Moore.

The two are nearly inseparable when leaving the arena.

“It’s really helped both of us to be on the same team. He is someone I can talk to about anything and I help him talk to teammates and coaches,” said Yeryomenko.

“I played with a Russian in college, but I was never aware enough to learn anything that might have helped me out down the road,” said Hitmen Head Coach Dallas Ferguson. “We have a clear understanding that if there is something they don’t get, to grab one of the coaches and have them explain it a little easier, so they aren’t jumping into something without knowing what is going on.”

These days, Yeryomenko hasn’t needed much help with anything Ferguson scribbles on the clipboard at practice.

Just 24 games into his second season with the Hitmen, Yeryomenko is on pace to obliterate his WHL career-high point total. Last year, in 62 games, he recorded six goals and 19 assists. That was good enough to rank him fourth in rookie scoring by a defenceman.

This year, he already has six goals and currently sits with 14 assists, to go with a plus-five rating. He currently sits 14th among all blue liners, 13 points back of Brandon Wheat King rear ender Kale Clauge.

Yeryomenko credits much of his development early on to that of the Belarusian Hockey God, Vladimir Kopat.

If the name doesn’t ring a bell, Kopat’s career-defining goal will.

He was the defenceman that pounded a puck from just past centre ice during the quarterfinals of a 3-3 game against Team Sweden during the 2002 Winter Olympics. His clapper came with just over two minutes remaining, as it boinked off Tommy Salo’s forehead and trickled into the net, eliminating the medal favourites from the Games.

“Everyone in Belarus knows that moment and knows that goal. It was an unbelievable moment, I remember watching it as a kid,” said Yeryomenko. “It would be a dream to play in the Winter Olympics for Belarus one day like Vlad did.”

Helping attain that goal is Kopat, who works as an assistant coach with the U18 and U20 national programs.

“I talk with him lots. He is always telling me helpful things to improve my game,” said Yeryomenko.

The two were together when Belarus won gold during the World Junior Championship U20 Division 1A last winter in Germany.

The first-place finish meant that Belarus was promoted to the World Junior Championship this holiday season in Buffalo, N.Y., against the big boys in the junior world.

Making the trip to Buffalo will be Yeryomenko’s line mate and runner-up at last year’s event, Jake Bean with Team Canada.

Belarus is slotted in Pool B and sits Canada in Pool A. The two teammates won’t play each other in the round robin play. It’s something they are both actively aware of.

“We joke all the time about it. I keep telling him that we will play him in the quarterfinals and knock them out,” said Yeryomenko with a mile-long smile on his face.

Bean laughs it off. A Belarusian win over the Canadians at the U20 tournament would immediately be on the short list of greatest Belarusian international hockey moments, alongside Kopat’s blast.

Yeryomenko and Bean might be rivals next month, but lately, they have developed a formidable duo on the ice that has allowed both to flourish this season.

“Yoyo is a very smart d-man. He sees the ice really well, has really come along this year and can play big minutes against anyone in this league,” said Bean.

The nickname “Yoyo” spread like a wild fire last season when former Hitmen captain Michael Zipp bestowed the nickname upon him because, “He said I had too many letters in my name and this was easier for him to say,” recalled Yeryomenko.

Bean and Yeryomenko compliment each other perfectly on the ice. They get along famously off the ice, both are of the smaller variety and skate extremely well. They both have the utmost confidence in their puck-handling and can escape pesky fore-checkers with ease. The two play together most games and in most situations.

“Yeryomenko has the patience with the puck to hang onto it a little bit longer than he should to escape danger, or the hockey sense to see the easy play and make the simple pass. The two play well together and they are getting rewarded for their work in the offensive end,” said Moore.

Bean occasionally provides the 18-year-old Yeryomenko with advice as the draft year unfolds, although the former 16th overall pick by the Carolina Hurricanes claims he doesn’t really need it.

“To be honest, Yoyo is a really mature guy. He’s one of those guys that just gets it. He doesn’t need much advice from me; he’s already well on his way,” said Bean.

With the upcoming draft, debut in the World Juniors and a plausible trip back to the playoffs, the date Yeryomenko has circled on his calendar is when his parents and younger sister visit his new home for the first time in February.

“I talk to my parents every day on the phone or on FaceTime. They have really helped me through my time in Calgary,” said Yeryomenko.

The strong support system in place from his parents, his Russian-speaking billets, the Hitmen family and help from a hockey hero has helped fueled a childhood dream that might be coming to life in front of his own eyes.

Yeryomenko was robbed of a chance to attend his first NHL Developmental camp last summer. An issue with his Canadian Visa bubbled up at the last minute and kept him from participating at the Toronto Maple Leafs developmental camp. But if Yeryomenko keeps this pace up, he will have more opportunities to attend developmental camps and main camps with an NHL club down the road.