When you think of forwards in the Western Hockey League, you think of scoring and passing the puck. You think of some physical ones who would throw their bodies around and some smaller ones that you couldn’t catch on the ice because of their speed and their innate ability to find the puck and score in small areas of the ice. The Spokane Chiefs have had some fantastic forwards come through in their history. Here are the top five forwards in team history (at least according to some fans and myself).

Kailer Yamamoto’s name has come up a lot when I asked fans who their top five forwards would be. The Spokane native had a fantastic career in Spokane. He played 230 regular-season games for the Chiefs and compiled 105 goals and 186 assists for 291 points in his Chiefs career. Fans immediately became enamored with Yamamoto in his first season in Spokane when he posted 23 goals as a 16-year-old rookie with the Chiefs. His 23 goals as a 16-year-old rank second in team history.

Yamamoto was always known as a very elusive forward with breakaway speed. He always was willing to get in the dirty areas and could score at will. His most notable goal came in Game 6 of the 2016 playoffs against the Everett Silvertips. With 5.6 seconds left on the clock and the season on the line, Yamamoto tipped home a shot from Adam Helewka to tie the game and send it to overtime. The Chiefs would eventually lose in triple overtime and drop the series.

Yamamoto would start making his way up the NHL Central Scouting draft rankings throughout the 2016-17 campaign. He posted a career-best 42 goals and 57 assists for 99 points during that season and would be projected to be a first-round pick. The Edmonton Oilers jumped at the chance to get Yamamoto and selected him 22nd overall in the 2017 NHL Entry Draft.

Tyler Johnson was another name that came up a lot in my search for the top five forwards in team history. Johnson was one of the key cogs that led the Chiefs to win the 2008 Memorial Cup. Johnson was an 11th round pick in the 2005 WHL Bantam Draft for the Chiefs. Another Spokane native that had a fantastic career in Spokane. He played in 266 games and put up 128 goals and 154 assists for 282 points in his four-year career in Spokane. He was named the MVP of the 2008 WHL Playoffs and the 2008 MasterCard Memorial Cup.

Johnson was an under the radar player who the Chiefs took a chance on and it worked out magically for both the Chiefs and Johnson. He got to play his entire junior career in his hometown and was a finalist for WHL Player of the Year in his final WHL season in 2010-11. He was named the WHL’s Most Sportsmanlike Player and compiled 58 goals and 115 points in his final season with Spokane.

Johnson went undrafted and attended NHL camps to try to find a team and eventually would sign with the Tampa Bay Lightning. He has been a key contributor on a very good Lightning team since making his NHL debut in the 2012-13 season and playing his first full season with the club in 2013-14.

Valeri Bure is all over the Chiefs record books and while it is hard to put him third on the list, you’ll understand why when you see who numbers 1 and 2 are. Bure had a fantastic three-year career with the Chiefs. Hailing from Moskva, Russia, Bure joined the Chiefs in 1991, one year before the CHL started doing the import draft. In 178 games for the Chiefs, he posted 135 goals and 163 assists for 298 points. He has the most goals in a single season in team history with 68 and sits sixth in team history for goals, ninth for assists, and fourth in total points. Bure was part of the best team in team history that won the 1991 Memorial Cup.

Bure was selected in the second round, 33rd overall by the Montreal Canadiens in the 1992 NHL Entry Draft. He played an 11-year career in the NHL with the Canadiens, Calgary Flames, Florida Panthers, St. Louis Blues, Dallas Stars, and the Los Angeles Kings.

As mentioned with Bure, it is hard to not put Ray Whitney at number one. He is the only Chief to have his number retired by the team. His number 14 jersey currently hangs from the rafters inside the Spokane Arena. Whitney compiled 141 goals and 207 assists for 348 points in his Chiefs career. His 141 goals are fourth and 207 assists are the most in team history. He was also a key member of the 1991 Memorial Cup Champions team for Spokane. Whitney was named the WHL Player of the Year and had the most points in the WHL during that 1991 campaign.

Whitney was selected in the second round, 23rd overall by the San Jose Sharks in the 1991 NHL Entry Draft. Whitney played 22 seasons in the NHL playing for eight teams and compiling 385 goals and 679 assists for 1,064 points. He won the Stanley Cup with the Carolina Hurricanes during the 2005-06 season. 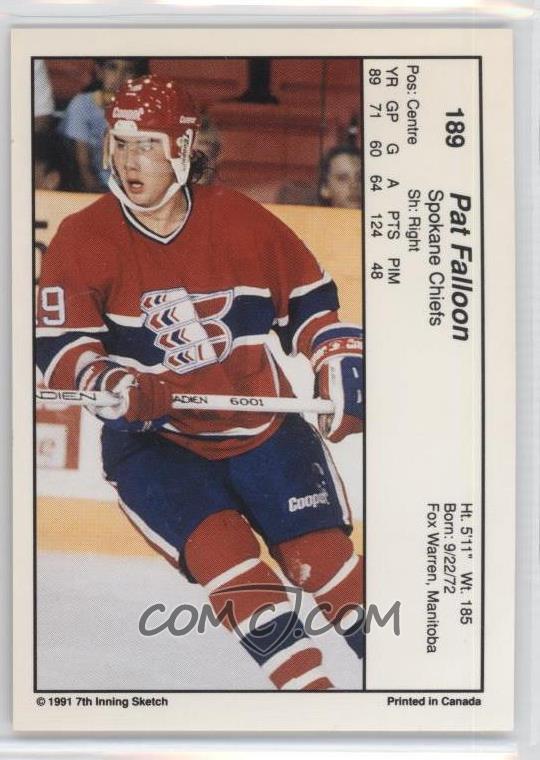 Pat Falloon rounds out our list. Regarded as probably the best forward to come through the Spokane Chiefs, Falloon was also part of the 1991 Memorial Cup Champions team. In his three-year career with the Chiefs, Falloon compiled 146 goals and 194 assists for 340 points in his Chiefs career. His 146 goals are second and 194 assists are third in team history. At the 1991 Memorial Cup, Falloon posted the most points and was named the MVP of the tournament. He was also named the CHL Sportsman of the Year and the WHL Most Sportsmanlike Player of the Year during the 1991 campaign.

Falloon was drafted second overall by the San Jose Sharks in the 1991 NHL Entry Draft. He is still the highest drafted player in team history. Falloon played nine seasons in the NHL.