So here we are, the unofficial halfway mark of the grueling WHL season. At this point, most teams are close to, and some are actually already at the 36-game mark which marks the halfway point for the regular season. The holiday break is wrapping up for players and coaches. The gifts have been opened, the food has been eaten, and the beverages have been consumed. The grind of hockey in January, February, and March is upon us. Some interesting story lines have developed across the league, the U.S. Division included. We’ll look at each team in order of current standings and then at some individual standout players.

Yes, the Everett Silvertips currently sit in 1st place in the tightly contested U.S. Division. Yes, this is somewhat of a surprise based on preseason expectations. Everett was supposed to be suffering from somewhat of a learning curve this season as the Kevin Constantine era ended, and the Dennis Williams era began. But here we are. The team struggled out of the gate, mostly due to the lack of secondary scoring. If your last name wasn’t Bajkov, Fonteyne, Sutter, or Dewar, you usually weren’t showing up on the score sheet. If teams were able to shut them down, then Everett struggled. Now they have won 11 of their last 12. How? Additional scoring from the likes of forwards Bryce Kindopp and Sean Richards, and otherworldly goaltending. Carter Hart suffered mono and missed a bunch of games early. Now, after playing in 17 games, he holds a 13-3 record, a 1.32 GAA, a 0.961 SAV%, and has posted 5 shutouts. When Hart isn’t between the pipes, 16-year-old rookie Dustin Wolf has been solid as well. In seven appearances this season, Wolf is 5-2 with a 2.00 GAA, a 0.942 SAV%, and 1 shutout. Can they keep up the momentum?

At one point, it looked like no one was ever going to be able to catch Portland. The Winterhawks won 20 of their first 25 games which included winning streaks of 7 and 10 games. And then the bottom fell out. The Winterhawks went 2-7-0-1 in their final 10 games before the holiday break. They failed to score more than 3 goals in those 8 losses and were shutout twice. Their secondary scoring has gone dormant. Their power play keeps sliding, firing at under 18% in those 10 games. Even Cody Glass was sent home early from Team Canada’s World Junior Championship camp. About the only bright news coming out of Portland the last few weeks was goaltender Cole Kehler signing an entry level contract with the Los Angeles Kings. Every team goes through adversity somewhere in the season, and even with the recent slide, they sit just one point out of first in the division with three games-in-hand on Everett. A strong statement coming out of the break could be just what Portland needs to get back on track. They will have to do this for a stretch without Kieffer Bellows, Joachim Blichfeld and Henri Jokiharju, while they play for their countries at the WJCs.

Expectations were high coming into the season for the Americans. Anything less than a deep post-season run would be considered a failure by those on the outside. Unfortunately, Tri-City has yet to find that consistency and depth that are needed for one of those runs. As forward Michael Rasmussen and defenseman Juuso Välimäki go, so goes the rest of the team. When both players are in the lineup, Tri-City is a force to be reckoned with. There has yet to be a clear cut leader step up when they aren’t playing, however. Tri-City is stacked with talent up front, so someone needs to take the reigns and help spread the love around to give the team a more dynamic attack. Forward Morgan Geekie has started to find his stride, but players like Kyle Olson, Jordan Topping, and Max James have yet to really consistently show what they’ve got. The good news for Tri-City is that they have games in hand on everyone in the division, including five games on Everett who they only sit five points behind for first place. Rasmussen, who most believed was a lock for team Canada in the World Juniors, didn’t even get invited to camp. That should make other teams take note as the chip on his shoulder from the snub should make him continue to dominate. Defenseman Dylan Coghlan will be asked to continue to lead the defensive group with Välimäki currently serving as captain of team Finland at the World Juniors. So far, Coghlan has stepped up big time in Välimäki’s absences this season.

The Chiefs have lived up to expectations in many ways this season. Regardless of the fact that they currently sit fourth in the division, they are right in the thick of things. The team has learned how to spread out the offensive output and the leaders have been leading. Forwards Hudson Elynuik and Jaret Anderson-Dolan lead the team in points, while defenseman and NHL prospect Ty Smith has 31 assists and sits at third in scoring on the team and sixth among all WHL defenseman. Edmonton Oilers prospect Kailer Yamamoto hasn’t lit up the score sheet since returning from the big club in November, but he has the ability to control the game on any given night. If the team can get consistent play on defense and in goal, they have the ability to finish close to the top of the standings come March.

The defending league champions currently sit just one point in front of Kamloops for the number two wild card playoff spot. They still have yet to find the answers to the holes in the lineup created from the exit of players like Matt Barzal, Keegan Kolesar, Ethan Bear, Ryan Gropp, and others. Second year goalie Carl Stankowski, who was lights out as a rookie in the playoffs last year, has yet to play a game this season as he works through an injury. Current starter Matt Berlin has been solid at times, but overall inconsistent. Forward Nolan Volcan and defenseman Turner Ottenbreit, who were both part of last years championship run, have stepped up to lead the team and continue the hard work tradition that has been imperative to Seattle’s recent successes. The 10-3 blowout they delivered to Spokane in the final game before the break should give the team some confidence entering the second half of the season. They’ll need to put together some winning streaks to keep in it, in this tough U.S. Division.

Here is our list of players at DUBNetwork that we think are leading the way at the halfway mark. 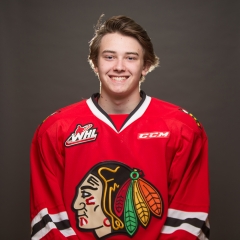 The 18-year-old is truly a force on the ice. In the 32 games he has played in this season, he has only been kept off the score sheet in six of them. He has 19 multi-point games and currently sits 9th in the league in scoring with 52 points (20g, 32a). His speed and vision on the ice are second-to-none. Opposing teams always give him extra attention, but are rarely able to shut him down.

Ottenbreit has become one of the clear cut leaders for Seattle. As an overage player in his last season in the WHL, he has learned how to use his big 6-foot-4 frame to frustrate opponents by blocking lanes and keeping play to the outside. His skating ability as a big man is solid, which allows him to be positionally sound and mobile. He has 18 points (4g, 14a) in 26 games played this season. He has also has a nasty streak and is not afraid at all to get physical with any opposing player who takes liberties on the ice. He leads Seattle with 62 penalty minutes.

This isn’t even really up for debate. Hart has been dominant. An early season bout with mono left many wondering how long it would take him to reestablish himself. It did not end up taking him long at all. Since returning, he leads the league in every category except for wins…which we figure will come once he plays in a few more games. He was the WHL goaltender of the week for four straight weeks. His strong play has been one of the biggest factors in Everett’s recent success. He is currently away at the World Juniors with team Canada where he is expected to be the starter. He’s good. Really good.

As an 18-year old rookie in the WHL, Johnson has started to find the success he was looking for in the USHL the last few years. He leads all U.S. Division rookies in scoring (6-12-18) and is 10th overall among league rookies. One of the keys to his success has been discipline. He spent a lot of time in the penalty box in the USHL, but through 27 games played this season, he has just just 8 penalty minutes. He is versatile and able to play in most situations, and on any line combo. He was passed over in last years NHL entry draft, but is making a statement in his second year of eligibility.

Kral has settled in nicely to the WHL way of life. He has provided good secondary scoring for the Chiefs (3-12-15) in 22 games played. He is a +9 which is good enough for fifth on the team. He has been good on the penalty kill and has a short-handed goal. He plays a disciplined game and steers clear of the penalty box. He got a late start in the season, not playing his first game until October 13th, but has become a solid piece to the Chiefs lineup.