It’s that time of year again! We at the DubNetwork always try to come up with a new order for previews each year and this season we are going with least recent to most recent Ed Chynoweth Cups for our order of previews. They will run 2-to-3 a day until September 20th. Then on September 21st – the day the season opens – we will have our predictions.

Six teams have not won a WHL title, so we went with least recent to most recent trips to the WHL final.

Only two teams have never been to the WHL final and they are the Prince George Cougars and Victoria Royals.

We are now at the Regina Pats!

2017-18: The Regina Pats were named the hosts of the 100th Mastercard Memorial Cup. The team did not 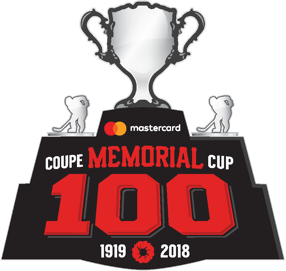 have the best season as hosts going 40-25-6-1 with a third place East Division finish behind the Moose Jaw Warriors and the Swift Current Broncos.

Because the Pats had made a run to the WHL finals in 2016-17, they had already expended a lot of their prospects and future draft picks and struggled to make exceptional deals to improve their team and catch the front runners in the East Division. The team did not want to completely empty the cupboards for the next few seasons so were left making deals to bring in players to bolster the bottom half of their roster instead of the top half.

The deals they did make helped the team to be respectable in the regular season before bowing out in seven games to the eventual Ed Chynoweth Cup Champion Swift Current Broncos.

-Forwards Cameron Hebig (32 points), Jesse Gabrielle (19 points) and Matt Bradley (79 points) aged out of the league taking their 61 goals with them. This is 24.9% of the goals from last season and doesn’t include the other talent no longer with the team including Sam Steel (signed Anaheim Ducks), Libor Hajek (signed New York Rangers) and Josh Mahura (signed Anaheim Ducks).

Other players no long with the team include Jared Leigen (Yorkton, SJHL) and Emil Oksanen (SaiPa, Liiga) Goaltender Ryan Kubic is also no longer with the team.

This accounts for 85 more goals missing from the team of last season. This represents 59.6% of their total offense.

The Pats were able to select two new imports at the 2018 CHL Import Draft. In the first round they selected 2001-born Sergei Alkhimov from Russia. He played last season with the Colorado Evolution U16 midget program. He scored eight goals and added 15 assists in 13 games. In the second round the team took another player from Russia, defenseman Nikita Zedov. The 2001-born player also played for the Colorado Evolution U16 team. He had three goals and eight assists in 11 games.

There are a further eight players listed as rookies on the preseason roster for the Pats as they headed into the final week before the WHL season began. 2000-born forward Riley Krane played the league maximum five games for the team in 2016-17 but did not see any action last season. He played for the Caribou Cougars in 17-18.

Carter Woodside is the only player of the 10 that was not drafted or listed by the Pats. He was brought to the Pats via a trade with the Kootenay Ice on August 20th, it cost the Pats a conditional eighth round pick in the 2019 draft.

2001-born forwards Garrett Wright and Carter Massier are players to watch, as they led the non-import rookies with three and two points respectively in the preseason. 2002-born Cole Dubinsky is another forward rookie looking to break into the lineup.

There are also two 17-year-old defensemen looking to make an impact on the roster for this season. They are Steven Zonneveld and Ryker Evans.

There is a new head coach with the Pats this season as John Paddock stepped down to focus on the general manager duties. Former assistant coach Dave Struch was promoted to head coach.

With a little less than a month to go the Pats find themselves in a bit of a situation with six overage players still on the roster. The only forward is Bryce Platt. He is joined by goaltender Jared Dumba and defensemen Aaron Hyman, Cale Fleury, Brady Pouteau and Liam Schioler. Fleury is away at Montreal Canadiens training camp, looking to earn a contract with the team. Aside from him, none of the players are a lock to make the team and there will be tough decisions to make for the team.

As mentioned earlier, the Pats were able to draft two new imports at the CHL Import draft. Russians Sergei Alkhimov and Nikita Sedov joined the Pats for the preseason and are in the future plans for the team as they are both 2001-born players.

There are mixed signals when looking at the forward group in Regina. The Pats lose a lot of offense from last season’s team that put up 245 goals. Will they be able to match that level with the players that are left on the roster?

Will Nick Henry and Robbie Holmes come back from Colorado Avalanche camp ready to take on the world or will we see some disappointing play that sometimes follows players who are cut from training camp without being signed?

Leschyshyn has that elusive NHL contract with the Vegas Golden Knights and will be trying to make the most of his last year in the WHL.

There will be as many as five rookies in the forward corps this season including import Alkhimov who has impressed early in the preseason with two goals and an assist in six games.

Has Austin Pratt taken another step in his development after being passed over in two drafts? He’s got two memorial cup trips under his belt, and he’s been under some great leadership groups. If all the 1999-born players return and are able to gel quickly this team has the potential to ice a decent top-six that can compete with most teams. It is the bottom-six that is troubling. Hopefully the young group can pick up some of the slack when the top two units aren’t firing on all cylinders.

Two of the best defenders in the entire Western Hockey League have departed in Hajek and Mahura. Both players are signed overage players and are not expected back in the WHL for any reason. Should either or both return, it is highly unlikely they would be playing for the Pats, and they would be dealt swiftly to a team making a run for the Memorial Cup in Halifax.

The only lock of an overage returnee is Cale Fleury. He will be the number one defenseman on this team until the trade deadline. Once the Pats have sorted out their position in the standings and have determined the return they would see for Fleury, it is almost certain they will move him to a contender. Until that time, the Pats have a solid defender in the mold of his older brother, Haydn who now patrols the blue line in Carolina for the Hurricanes.

Beyond Fleury, the blue line in Regina is a bit of a mess. Depending on what formula the team decides upon for the overage players, there could be as many as three 20-year-olds defending the Pats’ third of the ice. If they decide to keep either of Dumba or Platt then there will only be room for one more of the three other defensemen. There also could be three rookies on the blue line with import Sedov taking one of the spots.

Needless to say the Pats have a lot to decide when it comes to the defense. This is a situation to keep an eye on as the season begins and the overage deadline arrives.

The Pats still have four goalies in camp as of this Saturday. Max Paddock is the incumbent as starter He

Where things get interesting is the back up position. The Pats brought Kyle Dumba back in as a 20-year-old. There are not a lot of backups in the WHL that are overagers. Dumba only played in three regular season games and didn’t see any playoff action aside from seven minutes.

Carter Woodside was traded from the Ice to the Pats and signed with the team right away. The 17-year-old has zero WHL experience and did not have a “great” preseason with a 2.70 goals against average and .895 save percentage. He was also credited with a loss. Which brings us to the other rookie netminder for the Pats – Matthew Pesenti. Pesenti actually played well in the preseason with a 3.17 G.A.A. and a .912 save percentage to go along with two wins.

This is another area the Pats have some decisions to make. Keeping Dumba around really makes for an interesting dynamic in that the team has a pile of overage players already. Is it better to keep him around as a backup or risk having a rookie 17-year-old with no experience in the WHL as your backup? Time will tell what John Paddock has in mind.

Much of the team that was part of the run to the Western Hockey League Final in 2016-17 is gone. Even the team from last year is depleted as the team had a lot of 19-year-olds and the overagers on that team carried a lot of offensive weight for the Pats.

Regina is in an interesting position with the team it currently has. None of the players are legitimate superstars in the WHL. Leschyshyn is the closest thing and he may not stay with the team for long if the season heads south early. Even if the top-six fires on all cylinders this season, the team will struggle to score at the same pace it has in the past two seasons.

Their overage situation leaves a lot to be desired. Fleury will be the best player on the team and he can’t score enough goals to bring this team to the forefront of the East Division. It’s unlikely he remains a Pat for the entire season. The other overage players are certainly not much more than average and there are a lot of them. If the Pats decide to keep Dumba, they are not confident enough in Paddock to take the full reigns despite being pretty solid in the Memorial Cup.

Much of the outlook really depends on the situation with the overage players and how the General Manager and Head Coach decide to deal with the goaltending duties for the duration of the year.

I currently have the Pats as a bubble team; not good enough to be in the top three in the division but not in the basement either. Watch for them to slip into a wild card spot and then it’s anyone’s guess in the playoffs.