The two faces of the Regina Pats organization – GM John Paddock and forward Connor Bedard – met with the media this week via Zoom to discuss the upcoming WHL season, pegged to begin January 8.

Bedard, who’s recently returned from a lengthy training stint in Sweden, is anxious to get to Regina and get his Exceptional Player season going.

“We’re aiming for that start, and hopefully it goes,” Bedard said from his North Vancouver, BC home. “If it doesn’t, I guess you keep training and see what happens.”

Paddock wasn’t even that forthcoming when asked how the WHL will start up despite strict Covid restrictions across Western Canada.

“I wouldn’t tell you if I did know,” Paddock shrugged.

However, the grizzled hockey executive opened up a little more when it came to why league personnel is so optimistic about getting the 2020-21 season underway.

“We need to be flexible, adaptable,” Paddock continued. “Things can change positively and negatively at the drop of a hat. Our plans are dictated by different people from every organization. The Western Hockey league, being asked or being on some sort of committee or passing their thoughts on, officially or unofficially, to people in the league.”

Bedard is a popular interview target but questions about the pressure of being the WHL’s first-ever Exceptional Player have long gone by. He answered them in spades back in the spring when the Pats drafted him #1 overall, and now the reporters are generally more interested in how his time in Sweden went. 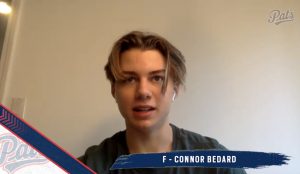 “It was a lot like my everyday life here,” Bedard reported. “You get up, you work out, you go to the rink and you skate. They (his teammates) would go to school, and maybe I’d stay for a bit, and then we’d go back for more ice. It was pretty cool. They train a bit different than we do here so I learned some stuff I can incorporate into my game. Obviously, just the experience of being in a different country, hearing them speak another language, was a pretty cool experience for me.”

The Swedish hockey season was paused, just like here, due to Covid concerns so Bedard packed up along with his sister and came home. However, it’s an experience he won’t soon forget.

“I think being in a schedule made it a lot more normal,” Bedard continued. “I was at the rink all day, but some of the stuff with the language was a bit weird. With your buddies (back home) you’re going to bed and they’re just waking up. That aspect of it is a bit weird but it was cool to be in a different place and see new things. But a lot of my day was being at the rink so that made it an easy transition.”

Bedard’s lucky, and he knows it, that he’s been able to compete at a high level during the pandemic and be invigorated by an exciting venture such as the Sweden experience. Now he’s just like his Pats teammates; stuck at home, waiting for training camp to begin and the season to start on January 8.

“I’m kind of treating it like it’s the summer,” Bedard reported. “Go workout, train kind of stuff, but obviously I wish I could be in Regina right now. But that’s not the case so you have to just adapt and figure out the best way to improve your game.”

On the hockey business side of things, there were other leagues playing this fall including Junior A, U18 AAA, and U15. Paddock said those games kept his scouts busy, although not formally.

“Our scouts have seen a few games, in an unofficial way,” Paddock said. “They’re not being given direction to go, but they’ve gone geographically. Things like that, you want to be on top of because they’re the foundation of the organization. No matter how things go, games will have to be scouted.

“And there’s been quite a bit of communication (with other teams). You’re not talking to your peers about trades, but you’re talking to them about Covid and different situations that may arise. There’s some time-consuming things that we go through.”

So now we wait, say a little prayer, and hope this 2020-21 WHL season truly gets off the ground come January 8

The Rod Pedersen Show airs daily at 12:00 pm ET on Game+ TV in over 1.2-million homes across Canada and the USA. It’s available in Manitoba on Bell/MTS Cable, in Saskatchewan on SaskTel Max, in Alberta & BC on Telus Optik TV, and in Washington and Oregon states on TDS Cable. It’s also simulcast on Facebook Live and RodPedersen.com/ListenLive 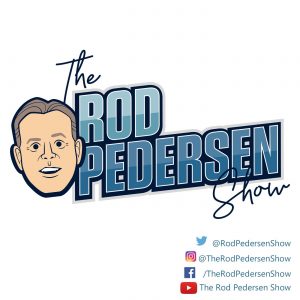