2 – MULTIPLE POINTS: The Calgary product sniped to end the fourth-longest game in Stanley Cup Playoffs history, Game 1 against Columbus in Round 1 this month, and then the series-clincher. With that, Brayden became the second player in franchise history to score a series-clinching goal in OT. Martin St. Louis did it twice (2003 and 2004). St. Louis did it over 13 seasons in Tampa while Point is in only his fourth season and isn’t leaving Tampa anytime soon.

3 – HIS COACH: Tim Hunter coached Point for two seasons in Moose Jaw and says the 5-foot-10, 166-pound sharpshooter simply has a nose for the net. “Great players put themselves in great positions to score goals because they go out every shift to try to be a difference-maker; not just go through the motions,” Hunter said on The Rod Pedersen Show this week. “Pointer goes out every shift to do something. To make something happen. I remember in Moose Jaw, if I needed a faceoff won or to get the puck out of our zone, I’d put Pointer out. He would just will the puck across the line. That’s the way it is in the NHL; he has a special skill but his quality is his will to win and his will to compete. That started when he was a real young boy wanting to be in the NHL.”

4 – HATS OFF: To Lightning Head Scout Al Murray of Regina, SK who’s had a big hand in rebuilding that franchise. The Lightning have advanced to the second round in four of the past six seasons, matching Washington for the most second-round appearances since 2015. However, the Caps won’t make it this year, having lost in Round 1 to the New York Islanders. The St. Louis Blues were denied a fourth trip to Round 2 after bowing out to the Vancouver Canucks.

5 – SIN CITY: They tell me there are more Vegas Golden Knights fans in Brandon, MB than there are Winnipeg Jets fans because Wheat Kings owner/governor Kelly McCrimmon is the GM of the Golden Knights. So they must be scratching their heads in Brandon too that the Knights have supplanted franchise star Marc-Andre Fleury in goal for the playoffs with newcomer Robin Lehner. Fleury, I’m told, is the second-most popular man in Las Vegas behind Wayne Newton.

However now Vegas coach Peter Deboer – who was handpicked by Crim to coach the team in January – is being skewered by many for this decision including by Fleury’s agent Allan Walsh. I say back off and let Deboer coach the team. If it blows up in his face, go nuts, but at least let him do it his way.

For the record, the Golden Knights are my favourite team too. 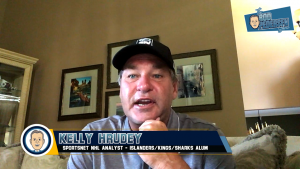 6 – HRUDES: While we’re morphing Dub alum, Stanley Cup Playoffs, and goalies, I’ve gotta recount this story from L.A. Kings great and Hockey Night In Canada analyst Kelly Hrudey. The former Medicine Hat Tigers goaltender (1978-81) led Wayne Gretzky’s Kings to the 1993 Stanley Cup Final but they barely got out of Round 1. Let Hrudey tell the story … “My goalie partner Robb Stauber was instrumental getting us out of the first round because around late-November that season I went completely into the ditch because – although I didn’t know it at the time – I was having mental health issues,” Hrudey told us on The Rod Pedersen Show. “Coach Barry Melrose saved me because they had me work directly with Tony Robbins and it changed my life. Tony got me out of that ditch and dark place.

“Calgary got a 2-1 series lead and Barry made the wise decision to go to with Robb Stauber. We won that series with him and he started Round 2 against Vancouver. Somehow I got the net back and played the rest of the playoffs but Robb was a phenomenal goaltender.”

The moral of the story? Sometimes you stand a far greater chance of winning a championship with a 2-goalie system. It’s #KnightTime

7 –  S-JAY DELAYED: You read this column because you love hockey right? I’m sure that means you follow Junior A hockey too, right? Great! SJHL President Bill Chow was on The Rod Pedersen Show this week and informed us they’ve pushed their regular season back two weeks due to Covid-19 and plan to start October 9. They face a far different set of circumstances than does the WHL, not the least of which is no Canada-US border travel and also there’s a minuscule number of Coronavirus cases in SJHL markets.

8 – SAFETY FIRST: Chow was a Prince Albert City Police officer for 30 years before becoming SJHL President, and that’s where I met him. He had to calm me down in this interview regarding a Return To Play for junior hockey. “It’s a priority for sports people like you and me Rod,” Chow advised. “My intuition tells me that for government health, their priority is the safety of the people of Saskatchewan. With my background, I get that.

“Right now in my world hockey is important to me, but at the end of the day, it’s just hockey. And I don’t mean for that to minimize hockey but when I think of the bigger picture being loss of life and also school for kids and everything else they’re trying to figure out, sports is one piece of the puzzle and they’ve got a big puzzle to put together.”

9 – NEVER LOSE HEART HOUNDS: Staying with that Junior A theme for a moment, the Notre Dame Jr. A Hounds will have a new face behind the bench this season. Phil Roy has left to join the coaching staff of the QMJHL’s Shawinigan Cataractes in his home province. I was the colour commentator on several Hounds broadcasts over the past two seasons and Phil was always extremely professional and accommodating, so I’d like to thank him for that. Taking over the bench is Brett Pilkington, who has previous coaching experience with the Calgary Buffaloes and Okotoks Oilers after a lengthy playing career which included Bowling Green State University.

10 – BIEBER ON SKATES: Regina Pats GM John Paddock got tongues wagging in the Queen City when he virtually guaranteed the WHL will play this season, despite a delay. I’m telling you the hockey fans here are salivating over Exceptional Player Connor Bedard and you’re seeing much Pats gear on the streets. Head Coach Dave Struch said this city doesn’t get the credit it deserves as a rabid hockey town.

“I’ve noticed a difference,” Struch stated. “Regina is a sports town. They come to watch every game. Riders, Pats, flag football, whatever. I go to minor hockey games and they’re full with families, friends and fans of sport and athletics. Everything that happens in Regina is full.

“I think we deserve more credit for not just hockey, but all athletics. A lot of towns are ‘event’ towns. We were supposed to have the Grey Cup here this year but there’s just as much buzz around a single game in the City of Regina. That’s exciting! It’s my seventh year living here and I’ve learned that’s one of its biggest assets: it’s a sports town. When it comes to watching Connor Bedard, it’s going to be a spike in a lot of things but they’ve been faithful here to their teams and this is just going to help.”

(The Rod Pedersen Show airs daily at 10:00 am MT on Game+ TV Network in over one million homes across Canada and the US. It’s available in Manitoba on Bell/MTS Cable, in Saskatchewan on SaskTel Max TV, in Alberta & BC on Telus Optik TV and in Washington & Oregon on TDS Cable. It’s also available on Facebook Live and RodPedersen.com/ListenLive)