1 – A lot of us junior hockey followers are disillusioned with the fact the 2019-20 WHL season was cut short by COVID-19 and the 2020-21 season has been delayed until December 4. And that’s best-case scenario since the current Health & Safety guidelines here in Saskatchewan don’t even allow for hockey games of any kind at this time.

But leave it to Brandon Wheat Kings head coach Dave Lowry to put the situation into perspective.

“Obviously it’s disappointment but I think for us it puts the game in perspective of life,” Lowry said on the phone this week. “We’re dealing now with a global pandemic and ‘woe is me’ and yes, we’re all disappointed that we didn’t get to see our finished product after a lot of work being put in, but we keep in mind that a lot of people have lost their lives. There’s been a lot of families that’ve been upset so when I do talk about how disappointed we are, we keep in mind that, respectfully, there’s loss of life.

“But you’re disappointed for your 20-year olds. They didn’t get their proper send-off and they didn’t get an opportunity to know that that was going to be their last game. We really felt we got better every month and we really liked our team. We liked the way we were playing and the best part is hopefully when we resume we’ll be able to pick up where we left off.” (35-22-4-2)

2 – WHL Commissioner Ron Robison appeared on The Rod Pedersen Show this week to outline where the league stands for Return To Play and reiterated that the plan is for December 4 to begin a full schedule.

“We’re hopeful that we can have spectators,” Robison stated. “We’re a spectator-driven league and we need spectators to be viable. So yes our objective is to achieve that. We’re working with the health officials in each of these jurisdictions and they will ultimately make that call. But we’re hopeful we’ll find a formula to make it work and be safe for all concerned.”

Hub cities are working for the NHL, NBA and CEBL but Robison said that’s not something the WHL is considering. 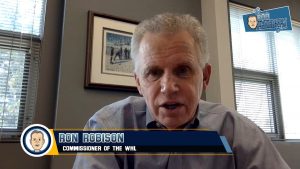 “No it’s not,” the Indian Head, SK product revealed. “Again, we’re fortunate because everyone, Saskatchewan in particular, across Western Canada has done a very good job of managing this situation. Our feeling is we want to open up in all our jurisdictions. Whether we’ll be able to remains to be seen. Obviously the number of cases in Washington and Oregon are significantly higher than in Western Canada and that’s something we’re monitoring very closely.

“We have the border issue that we’ll have to deal with as well. What we can say is we envision starting play within our divisions within our provinces and states to limit the travel and team movement. We’re working with a variety of pro-active measures but we think that’s one that’ll help us to start the season. We’ll build on those great rivalries which, as you’re well aware, live in those divisions of ours. But we’re determined to play.”

3 – Regina Pats General Manager John Paddock held a video conference with reporters after the announcement of the December 4 start date and admitted the league’s hands are tied.

“Us as teams have virtually no say and the league itself, I’m not saying it doesn’t have say, but there’s a lot that goes into it,” Paddock explained. “It seems our Province of Saskatchewan is the furthest ahead and may be able to set some sort of tone for the rest to hopefully follow but this is basically out of all of our hands.”

Paddock was asked if it’s a shame the much-anticipated rookie season of Exceptional Player Connor Bedard could be wiped out altogether.

“Let’s not go that far!” Paddock advised. “This is beating him and his family up because they’re as excited as us. We have things going on with him all the time and it’s a real bonus once we do start up, to be able to showcase him. I believe at some time we’re going to play.”

4 – Writing this column for DUBNetwork.ca has reminded me why the Western Hockey League is my favourite of all leagues. The personalities are unfailingly open for interviews and always happy to promote the league. No one ever got into junior hockey to get rich. Everyone’s in it for the love of the game and there’s always been a true “We’re in this together” attitude. I love the Dub!

5 – In our last column I recognized several WHL alumni who are alive in the Stanley Cup Playoffs in the coaching and management ranks in the NHL. Not surprisingly, I missed some and while perusing the benches of the Sportsnet broadcasts over the past two weeks, I’ve found some more: Calgary’s Ryan Huska (Kamloops), Dallas’s Todd Nelson (Prince Albert) and Derek Laxdal (Portland, Brandon, New Westminster), Minnesota’s Bob Woods (Brandon, Saskatoon) and Vegas’s Ryan Craig (Brandon). 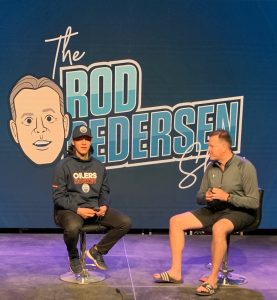 6 – A lot of us were expecting the Edmonton Oilers to advance further in the Stanley Cup Playoffs so I was hanging onto this quote from Oilers defenceman Ethan Bear for the weeks ahead. However Edmonton got bounced by Chicago in the Play-In Round and now Bear’s back home in Ochapawace, SK for the rest of summer.

In an appearance on The Rod Pedersen Show during the NHL’s pandemic break, Ethan described winning the 2017 WHL title with the Seattle Thunderbirds over the team he grew up watching, the Regina Pats.

“That was good,” Bear smiled. “Being from Saskatchewan and playing in Regina, I pretty much grew up watching the Pats and only the Pats. And then to play them in the Final, it was almost too good to be true. We had 5 or 6 Sask guys and all our families were there in one section at the Brandt Centre. When we scored, it honestly felt like a home game. And being from Regina, there’s a lot of native people here, it honestly felt so nice to play in that rink. When we won, it felt like we won at home.”

7 – Speaking of early playoff ousters, the Winnipeg Jets and their fans must still be shocked over losing to the Calgary Flames in four games in the Play-In Round. Wheat Kings coach Dave Lowry was following closely since his son Adam is a bruising forward on the Jets.

“Extremely disappointing,” Lowry blurted. “Obviously to be successful in the playoffs, it’s the team that can get through with the least amount of injuries. The unfortunate thing for Winnipeg is that they had two major injuries (Mark Scheifele and Patrick Laine) and Bryan Little too that they didn’t know was hurt. That’s three significant injuries to their forward group. It’s hard enough to win as it is but you take your best player out of your lineup, and then your best goal-scorer, it’s going to make it that much more difficult.”

8 – I picked the Jets to go the furthest of the Canadian NHL teams, all of whom were in the 16-team Play-In Round. Unfortunately you can do NOTHING about injuries other than to blame bad luck. My take on the series loss is that Jets GM Kevin Cheveldayoff of Blaine Lake, SK has built a team which can go deep in the playoffs and he’ll do it again.

9 – A blind man can see Philadelphia Flyers goaltender Carter Hart is the future in goal for Canada at world competitions. It’s great that we’re seeing the current and past – Montreal’s Carey Price – along with Hart all in the same first round Stanley Cup Playoff series.

Until Philadelphia’s 5-0 loss in Game 2 to Montreal on Friday, Hart had won his first three NHL playoff appearances which ranks him #10 all-time. Ahead of him on the list are Tiny Thompson (7), J-S Gigeure (6), Mike Vernon, Pete Peeters, Gary Inness, Rogie Vachon and Normie Smith (5), and Tony Esposito and Les Binkley (4).

Carey Price starred with the Tri-City Americans and Carter Hart shone for the Everett Silvertips.

10 – Speaking of goalies, Jason Labarbera (Tri-City, Portland, Spokane 1996-2000) spent 12 seasons in the NHL with the Rangers, Kings, Canucks, Coyotes and Ducks. Like the rest of us, he’s enjoying the Stanley Cup Playoffs and he’s waiting for the junior hockey season to faceoff as an assistant coach on the Calgary Hitmen staff.

“I live in Calgary,” Labarbera said recently on The Rod Pedersen Show. “I’m not from Calgary – I grew up in BC – but I moved to Calgary in 2004 and luckily enough the goalie coach job with the Hitmen opened up. That progressed into being a full-time assistant coach with the Hitmen and then I was lucky enough to work with Hockey Canada for the U17s, U18s, Hlinka/Gretzky and then the World Juniors last year. It’s been nice to set some roots in Calgary and it’s been real good.

“It’s no different than playing; if you want to progress you have to be prepared and willing to move so I’ll have to make some decisions down the road but for right now I’m real happy doing what I’m doing. The Hitmen organization’s been great to me and I’ve learned a ton. Even though you played, there’s so much to learn on a daily basis and I’m really enjoying it.”

For the record, Labarbera states that Portland is the best junior city to play in. Debate amongst yourselves!

(The Rod Pedersen Show airs daily at 10:00 am MT on Game+ TV Network in over one million homes across North America. It’s available in Manitoba on Bell/MTS Cable, in Saskatchewan on SaskTel Max TV, in Alberta & BC on Telus Optik TV, and in Oregon & Washington on TDS Cable. It’s also available on Facebook Live and RodPedersen.com/ListenLive)