TSN Hockey Insider Darren Dreger has some thoughts on Friday’s WHL Return To Play announcement of a minimum 24-game schedule.

Appearing on The Rod Pedersen Show, Dreger, the former Voice of the Brandon Wheat Kings, agreed with me that although the announcement was encouraging news, it triggered an avalanche of questions from Dub fans.

Those questions create a bit of a headache for the WHL.

“100% it is,” Dreger concurred. “I can’t imagine that fans are going to be allowed anytime soon, in Canada. We know that’s not an option for the National Hockey League, so why would it be an option for major junior hockey, the BCHL, or any of the junior leagues across the country?”

As far as the announcement itself goes, Dreger gave it a thumbs-up.

“I’m okay with what the Western League did,” the Langenburg, SK product offered. “And I can appreciate and understand why they’d want to keep that league relevant. I mean it is a huge feeder to the National Hockey League, as is the Ontario Hockey League and the Quebec Major Junior Hockey League.

“I guess if I were in a marketing position with any of those hockey leagues, I’d do pretty much what the Western League did; give the fans some form of appetite. But the fans are still going to be the fans and if they can’t get in the building, then are all these games going to be televised? And how are they doing that? Is it going to be the MyHockey format that they have here in Ontario that’s going to be covering all of these games? There’s a lot of logistical hurdles that have to be overcome before any of this flies.” 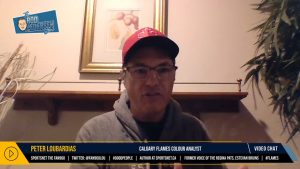 Calgary Flames radio analyst Peter Loubardias agreed with all of Dreger’s comments and preached patience for WHL fans, as hard as that is.

“I am not going to criticize anyone for doing their best to salvage what has been an incredibly difficult and trying time,” Loubardias said on The RP Show. “The minute that you are so quick to criticize on what it should or shouldn’t be, take your glasses off and think of operating from the lens of the WHL.

“What that league and the CHL has been through, whether it’s lawsuits, the pandemic, the changing of their business, let’s have a little patience. Let’s applaud people once and for all for trying to do their best with circumstances that change every five minutes. I applaud them, I hope for the kids and all the people I love and care about in that league that they can find their way to 24 games and make something out of it.”

Well said by both gentlemen! Now let’s wait for what’s next.