The late 80’s and early 90’s the Seattle Thunderbirds enjoyed winning seasons they had not previously been accustomed to. On the strength of superstars like Glen Goodall and Petr Nedved, Seattle soared to rarified levels of success. However, even after their departures, Seattle remained very competitive and that was no mistake as there were talented players who emerged on the defensive side of the puck as well. Next on my list, at #11 is one of the best pure shutdown defensemen to come through the Thunderbirds’ organization, Brendan Witt. 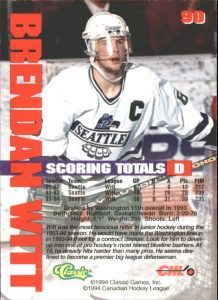 Born in Humboldt, Saskatchewan, Witt started his career in Seattle during the 1991-1992 season. Never known for his offensive prowess, Witt entered the league at the end of what was known as “fire wagon hockey”. At the young age of 16, Witt made his presence felt immediately. Not only as a bright young defenseman, but as one of the absolute toughest players on the roster. Witt played in 67 games his rookie season, contributing three goals and nine assists for 12 points. However, the real eye popping stat from that season was the impressive 212 penalty minutes, which ranked fifth on the team behind the likes of players like Turner Stevenson, Dody Wood and Blake Knox. Witt also saw 15 playoff games, chipping in a goal and one assist, but another 84 PIM. Seattle lost to the eventual League, Memorial Cup Champions and Don Hey led, Kamloops Blazers. This was the year Seattle played host to the annual CHL tournament as well.

Witt followed up his rookie season by improving everywhere on the ice. His ability in his own end was showcased and garnered the attention of NHL scouts across the league. He also improved offensively as well. Although scoring one less goal in his sophomore season, he added 26 assists for 28 points. This more than doubled his offensive output from the previous season. His physical game took no step back either as he was second on the Thunderbirds in penalty minutes amassing 239 in 70 games played. Witt was selected in the 1993 NHL entry draft 11th overall by the Washington Capitals. In years to come he shared the captain’s “C” with another, future Thunderbird, so to speak.

1993-1994 was Witt’s final season in Seattle. After being drafted during the summer, Witt went on to have his best statistical season as an 18-year-old. He had a career low in games played with only 56 but produced his best offensive season of his WHL career, scoring eight goals and adding 31 assists for 39 points. Witt also continued to be one of the toughest players in the league gathering 235 more penalty minutes on the season. Witt also had the opportunity to represent his home country in the World Juniors that season. He went on to add 11 more points (3G, 8A) over nine playoff games to end his Western Hockey League career. After the season, Witt was awarded the Bill Hunter trophy as the WHL’s top defenseman.

Witt sat out the entire 1994-1995 season while his agent and then general manager of the Washington Capitals, David Poile, were involved in one of the more bizarre contract disputes in NHL history. Fortunately, the two sides came to an agreement and Witt made his NHL debut in 1995-1996.

Witt went on to enjoy a 15-year career, with most coming in the NHL. He even co-captained the Capitals at one point, with future Thunderbirds head coach, Steve Konowalchuk. Witt remained a premier defensive defenseman in the NHL throughout his career and shied away from no one, as he remained one of the toughest players on the ice. Witt can best be described as a big time WHL player and his legacy in Seattle is still felt to this day.