When he got drafted by the Regina Pats, 2001-born forward Cole Muir was excited. Here was an opportunity to play not far from his Vista, Manitoba home and get to play on a team that was loaded with high-end talent.

Muir was selected in the second round, 33rd overall by the Pats at the 2016 WHL Bantam Draft out of the Yellowhead Chiefs program.

“It was a really exciting time for me because I always looked up to guys that were taken in previous drafts and there were guys that were drafted that were close to me. During the season, before my draft, Regina was pretty interested in me and I was hoping that I was going to be pretty close to home. That kind of worked for me and was close to home,” Muir said. 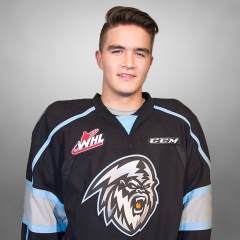 Muir got into one game for the Pats who went 52-12-7-1 and notched the best record in the WHL.

The Eastern Conference champion Pats were loaded with talent.

“It was really amazing. But it was pretty nerve-wracking too because you know they are going to have to go on to successful careers. I looked up to them and watched what they did on and off the ice. It was a good experience for me and I got to know them.”

Muir made the Pats for his 16-year-old season and was poised to play on the 2018 Memorial Cup hosting team. Then on November 17th, 2017 Muir was dealt with defenseman Jonathan Smart and draft picks for Kootenay ICE defenseman Cale Fleury.

“It was tough for me to leave Regina. My parents were always there. The adjustment was difficult and moving far away from home was tough on me. But once I got settled in everything worked out.”

Now Winnipeg ICE head coach James Patrick has seen a lot of improvement in Muir’s game since he was acquired from Regina.

“He did not play a lot in Regina. He was a healthy scratch most games. He has built more confidence this season and has gotten play in all situations,” Patrick said.

“Last year as a 16-year-old, he was getting his feet wet in the league. This year we have had a lot of changes and have gone really young as a team. It’s been really good for Cole because he has gotten to play a really big role.”

Muir agrees that the young ICE have made strides and are poised to jump up in the standings in 2019-20.

“We have a lot of young talent and we don’t lose games by that much. It’s usually self-inflicted. Moving on, a couple years from now we are going to have a really strong team. Hopefully we will win a couple championships. Having Krebs and all these young guys who are really good players in the league right now. I cannot wait to see how they develop,” Muir said.

Muir has a simple way of looking at things. The six-foot-three, 203-pound power forward is committed to keeping the puck out of his own net, just as much as he is putting it in the other net.

“I try to model my game off of Evgeni Malkin – a two-way power forward. The way I think about it is if you score a goal and get scored on it’s still tied. But if you score and don’t give up a goal you are ahead. Before the game, my line really talks together and commit ourselves to a defensive role – before every game.”

“Cole is a big body who can skate. He is a really strong skater. He has the traits to be a power forward. He is strong on the puck and can really take a hit. He barely even budges when he gets hit pretty good. He has been playing a top-six role for us this year. We use him in front of the net – sometimes first and sometimes second power play. he kills penalties. He makes plays and is rounding out to be a good two-way player,” Patrick said.

The 209th ranked North American skater by NHL Central Scouting for the 2019 NHL Draft knows he has a lot to work on though.

With the ICE moving back to Winnipeg, he now gets to have his parents back close to him. He also gets to be a key player for a team on the rise. It seems clear the development in his game has benefited from the increased playing time he has gotten with the ICE.