It is often hard for even the most talented defenseman to work their way into the WHL at a young age. The trust a coach has to have in his blue liners, is something that is hard won.

After being drafted third overall in the 2016 WHL Bantam Draft, Byram was called up and allowed to play 11 games for the Giants in the 2016-17 season. This was six more than is usually permitted and it was allowed due to injuries on the Giants blue line.

There were so many injuries that the Giants had to play less than the usual six defenders and Byram was given major minutes, playing against competitors far older than him.

The fact that Byram never looked out of place and was often praised in his time, set him up to get even more opportunities as a full time WHLer in 2017-18. 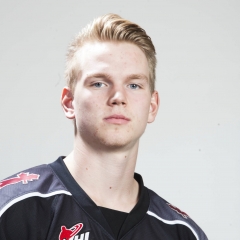 Byram credits those 11 games as being key to his success as the Cranbrook, B.C. native, who was recently rated an “A” prospect for the 2019 NHL Draft by NHL Central Scouting starts his draft eligible season this year.

“I think that played a huge part in my development. As I was a 15-year-old, it was a challenge for sure, competing against older guys and what not. I thought I handled it pretty well and played pretty well through my 11 games so I think that helped with my confidence,” Byram said.

The injuries have plagued Vancouver on the blue line again this year and last year meaning Byram has often been among the ice time leaders on his team.

“It’s been really fun getting to play a lot every night. You never like seeing your teammates get injured and miss games because you want them to play as well, but it has been fun getting the chance to play every night and get to play so many minutes every night. It’s been good for my development as well.”

Byram helped the Giants back to the WHL playoffs last year and there were a lot of lessons learned on the way during their hard-fought seven-game series loss in the first round to the Victoria Royals.

“I learned just how hard it is to win in the playoffs. We won Game 1 and everyone was thinking we were going to sweep these guys. It’s tough to win games in the playoffs. Every game is a battle but it just makes you that much hungrier to get there again the following year. Everyone is excited and wants get another taste of the playoffs and I believe we will get there. If we keep playing the way we are playing now, we should be well on our way. It’s exciting and something to push you through the regular season.”

With so many Hockey Canada scouts getting to take him in as a 16-year-old and him putting up six goals and 21 assists for 27 points, there was no surprise in him getting invited to Hockey Canada U18 Hlinka Gretzky Cup camp.

He then earned a spot on the final roster and was a key d-man for the team that ended up winning the whole thing. Byram looks back on his experiences this summer fondly.

“That was great. First off, we had a great venue there at Rogers Place – it is a state of the art arena. Probably one of the best, if not the best arenas in the world. It was cool to be just be around the Oilers dressing room. The tournament itself was great, there were a lot of good teams there and a lot of good players. It was definitely a fun week for everyone and it was great to come away with the gold medal. It was also great to meet new guys from Canada and around the world.”

The Hlinka Gretzky was different this year in that it was nationally televised and Byram and some of the other highly touted prospects heard draft talk about themselves while competing in the tournament.

The six-foot-one, 192-pound blue liner was focused on the prize though and not distracted hearing his name mentioned as a possible top-five pick next June.

“I think it fairly easy being with that team and being with those type of guys because all the guys there were highly touted players. Just being around the other guys and everyone getting attention in different ways made it a lot easier including myself to handle. Just being able to bounce things off other guys and chat about it in the locker room made it easier.”

This summer was one of turnover for the Giants as Scott Bonner stepped down as general manager and Jason McKee was removed as head coach.

The replacement was a coach that Byram knows quite well, Michael Dyck.

“I was super excited when he got named the head coach of the Giants. He’s a great guy and he’s a really good coach. He’s been my coach for three, four or five years through spring hockey and my two Bantam AAA years in Lethbridge. It was nice to have a guy that I already had a relationship built with and it’s been really fun. We’ve had a good start to the year and I think a lot of that is credit to the new coaching staff. We are lucky to have him.”

Byram has two goals and two assists for four points through seven games and the Giants are 6-1. A new coach and a big draft year make this year an exciting one for Byram, but the smooth skating defenseman is only worried about a couple of things.

“I’m just enjoying my time here and playing as much as I can – hoping to help the Vancouver Giants win.”