Every year during the WHL campaign, there is at least one player who starts out far down or off the radar for NHL scouts. Then, that player gradually works their way up the rankings until they end up far above where they were at the start of the year.

Last year Everett’s Connor Dewar went from being unranked by NHL Central Scouting to landing as third-round pick with the Minnesota Wild.

In 2016-17, Portland’s Cody Glass was listed as a “C” skater in the initial Central Scouting rankings and ended up being the sixth overall pick. 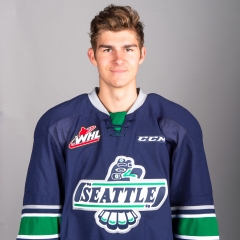 There always seem to be those players who scouts love more and more as the season goes on.

A strong candidate to be that player this year is Dillon Hamaliuk of the Seattle Thunderbirds.

The six-foot-three, 195 pound native of Leduc, Alberta is a late-2000 birthday and has used that extra time to turn into a potent power forward.

Originally a sixth-round pick by Seattle in the 2015 WHL Bantam Draft, Hamaliuk followed his older brother Dalton to the WHL and found himself playing for a contender right away.

He played 17 games in 2016-17 and had one goal for the team that went on to capture the Ed Chynoweth Cup as the WHL champions.

Last season he potted 15 goals and 24 assists for 39 points. He is well on his way to blow past those numbers this season.

Hamaliuk scored a goal in each of his first five games this seaon and had a point in his first seven. Over those seven games he had 15 points. Overall he now has 18 points in 13 games.

His play was so strong that despite not playing for Hockey Canada at the U17s or U18s, he is warranting consideration to play for them at the U20 World Junior Championships.

After Moose Jaw’s Justin Almeida was injured earlier this week while representing Team WHL at the CIBC Canada-Russia Series, Hamaliuk got the call to replace him for Game 2 in Langley B.C.

Hamaliuk was excited to get the chance to play on a national stage with the knowledge that if he played well enough he might end up playing for Canada at the World Juniors.

“It’s a great opportunity here. I just want to showcase my skills in front of all these people and I feel like I can do quite a bit of damage here,” Hamaliuk said in an interview posted to the WHL’s twitter page.

Hamaliuk went on to describe his game and how he is different than a lot of other WHL players.

“I don’t think there’s that many power forwards in the draft so I just want to be that guy who is physical and brings a lot of pace to the game – finishes checks and takes stuff to the net. There’s not too many people that do that so that is what I try to do.”

While a lot of people are just now recognizing how hard Hamaliuk plays and what sets him apart, this has always been the way he plays – as he told me earlier this season.

“It’s always been a part of my game. I know I’m a big power forward. It’s what I have to do – it’s my role to create a little bit of offense.”

As for his statistical outpouring this year, Hamaliuk credits his chemistry with overage center Noah Philp, who he has played with for awhile.

“Even last year, me and Philper had a bit of chemistry. We know where each other are on the ice and even our d-men – we know where everyone is and can make plays with that.”

Hamaliuk has gradually played a bigger role on the team, as Seattle head coach Matt O’Dette has tasked the speedy Hamaliuk with playing while short-handed.

“I have not played too much on the penalty kill even recently. They are throwing me out there sometimes. I’m thankful for the opportunity and (Kyle) Hagel our assistant coach who has been helping me through it quite a bit and showing me the ropes so I’m getting a little better at it.”

If Hamaliuk can add shutdown penalty killer to his always growing repertoire, he will continue climbing the draft charts and hear his name called early on in Vancouver, B.C. in June of 2019.