As has been previously reported by various media outlets, the Winnipeg ICE has confirmed to DUBNetwork 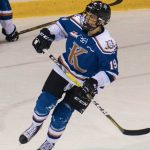 that Krebs suffered an injury prior to the upcoming NHL Draft in Vancouver.

The statement we received reads as follows:

“Peyton sustained an Achilles injury during an on-ice training session. Surgery was successfully performed on Friday in Calgary, AB and he will make a full recovery.”

“Time frame for his return will be monitored in phases by Winnipeg ICE Director, Sports Science, and Performance Dr. Jeff Leiter working closely with Peyton’s medical team in Calgary.

After playing 64 of 68 regular season games, Krebs scored 19 goals and added 49 assists on a Kootenay ICE team that failed to make the playoffs. He has amassed 128 points in 137 games, all with the Winnipeg ICE franchise.

He is a highly touted player for the 2019 NHL draft, ranked eighth by TSN’s Craig Button, sixth by Future Considerations, 10th by Larry Fischer of the Hockey Writers, sixth by Hockeyprospect.com, eighth by McKeen’s and eighth by ISS.

It is unclear whether an injury of this type will have an impact on his draft rankings.