Things looked bleak on Tuesday night for the Seattle Thunderbirds (25-16-4-2). They were down 4-1 to the visiting Brandon Wheat Kings (28-15-3-2) halfway through regulation.

Leave it to a 16-year-old defenseman and a well-travelled 19-year-old to change all that.

Jake Lee scored his third of the year with 5:12 left in the second period and Zack Andrusiak assisted on two markers before scoring his own with just 1:14 left to force overtime with the score tied at five.

After Seattle had some good looks in the overtime, the game went to a shootout. For the second straight game against a visiting East Division team, Seattle won. Austin Strand bobbled the puck then collected it and buried a chance five-hole and along with a smooth wrist shot from Noah Philp, that was all they needed for their fifth straight win. Donovan Neuls also was successful in the circus to seal Brandon’s fate. In each of the five games, Seattle has scored at least five goals.

Andruiak’s three point night led the way and Lee and Philp each added two. Dorrin Luding, who has started each of the five games, stopped 24 of 29.

Brandon’s Logan Thompson turned away 35 of 40.

Brandon finishes the U.S. Division leg of their road trip 0-3-1-1. They continue their trip though, up in Cranbrook where they will take on the Kootenay ICE on Friday. The Thunderbirds renew their rivalry with the Everett Silvertips on that same night up in Everett.

At this rate the Spokane Chiefs (25-19-1-2) might be the one team in the WHL who would prefer to play in the tough East Division. They finished off a six-game sweep at home against the likes of Brandon, Regina, Saskatoon, Prince Albert, Moose Jaw and now Swift Current with a 4-2 victory Tuesday over the Swift Current Broncos (33-12-3-1). 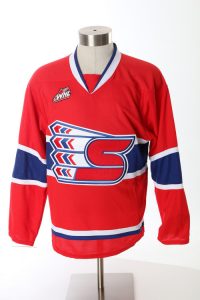 Dawson Weatherill also had a successful return to the Chiefs net with 28 saves on 30 shots.

In the loss, Aleksi Heponiemi had his 28-game point streak snapped. He had 69 points over those games.

Swift Current completes their U.S. Division road trip 3-2. They will now be off until  Saturday when they host the Regina Pats. Spokane heads up to B.C. to take on the Vancouver Giants on Wednesday.