When you are the top seed in the WHL’s Eastern Conference and the playoffs are approaching, the last thing you want to have is the current team you are set to play against playing their best hockey of the entire season. Worse yet is playing the team not too long before the playoffs begin and having them beat you, gaining a bunch of confidence in the process.

That is exactly what happened on Friday night at the Art Hauser Centre. Curtis Miske and Kody McDonald each scored twice, Cole Fonstad added three points and Ian Scott turned away 21 of 25, as the Prince Albert Raiders (31-25-9-2) took out the Moose Jaw Warriors (49-15-1-2) 6-4.

It was the eighth straight win for the Raiders and they go five points up on Saskatoon, who lost to Calgary in overtime.

The Raiders opened the scoring midway through the first. It’s usually Cole Fonstad setting up Jordy Stallard. On Prince Albert’s first goal, it was the reverse.

Stallard tracked down an attempt by Moose Jaw to get the puck out and slipped the puck to Fonstad. The draft-eligible center wired a shot by Moose Jaw goalie Adam Evanoff for his 21st this year.

Kody McDonald doubled the P.A. lead in the second, 4:17 in. Again it was a clearance attempt by the Warriors that did not get out. This time Parker Kelly threw a hard shot in on Evanoff and McDonald tracked down the rebound for his 33rd this year.

Branden Klatt took advantage of a P.A. turnover a few minutes later to cut the lead to one. Klatt forced Max Martin to cough up the puck and then walked in and beat Raiders goalie Ian Scott for his third this year.

The Raiders got that one back with McDonald’s second of the frame. McDonald chipped the puck away from a Warriors defender at the P.A. blue line and then played give-and-go with Kelly, tapping home the back door pass for his 34th and a 3-1 lead.

Jordy Stallard made it 4-1 on the power play a little later. Fonstad returned to his more known role as play maker as he flipped a cross-ice pass to Stallard that no Warrior seemed ready for. Stallard then beat Evanoff with a shot below his blocker for his 42nd this year.

The WHL’s leading scorer, Jayden Halbgewachs got Moose Jaw closer with his 65th on the season on a breakaway, but Curtis Miske would answer that back to end the second with P.A. on top 5-2.

Miske then put his squad up 6-2 with a short handed marker off the rush that Evanoff got a piece of. It was not enough though and the Warriors were facing a four-goal deficit.

Evanoff would stop 17 of 23 and that was one of two goals he’d probably really like to have back.

Moose Jaw would make this one a little more entertaining though, as they are apt to do. Justin Almeida potted his 40th with 13:19 left and Halbgewachs added his 66th with 6:37 left, but 6-4 was as close as the Warriors would get.

Halbgewachs’ 66 goals are the most in the WHL since 1998-99 when Pavel Brendl potted 73 for Calgary.

The Warriors stayed one point up on Swift Current for the top seed in the Eastern Conference and Est Division and still has one game in hand. The Broncos dropped a contest 6-3 to Brandon.

Moose Jaw now heads home for a battle with Swift Current on Saturday. This could go a long way towards determining who wins the East Division.

The Raiders will play Saturday against Calgary.

The Anaheim Ducks first round draft pick scored twice in eerily similar circumstances, with the second being the overtime winner as Regina beat Kootenay 2-1.

Sam Steel put on a one-man show late in the second to open the scoring. He dipped and dived around the ICE defense and then fired a quick shot that Kootenay goalie Duncan McGovern did not seem ready for.

The goal extended his point streak to 10 games.

Kootenay finally broke through midway through the third period. Brett Davis scooped up a chip pass and slipped the puck over to Alec Baer and Baer cut across, to beat Max Paddock and tie the game at one.

The magic number for the ICE to be eliminated is down to one as Red Deer beat Lethbridge 3-1?

The Pats remain three points up on Brandon for third in the East Division.

The Pats continue on Lethbridge for a tilt with the Hurricanes Saturday, while the ICE play in Edmonton Sunday.

Mark Rassell came into the Medicine Hat Tigers (35-25-8-0) game against the Edmonton Oil Kings (19-41-6-2) with his eye on the 50-goal mark for himself and one win closer to the Central Division title for his Tigers.

He was able to help accomplish both. Rassell tallied a goal, his 50th and became the first Tigers sniper since Cole Sanford in 2014-15 and 34th overall in franchise history to do so.

The Tigers wasted little time in getting Rassell to a milestone. He drove at the Edmonton net and slipped a backhand shot between goalie Todd Scott’s legs for number 50 on the season.

The Oil Kings then tied the game up as Tomas Soustal drew the defense dropped a pass to David Kope and Kope beat Tigers goalie Michael Bullion.

Under a minute later, the Tigers got their lead back. Ryan Jevne’s shot on the power play did not get through and Ryan Chyzowski smartly pounced on the loose puck and fit a shot just in by Scott for his 20th of the year.

Elijah Brown then added his eighth of the year with a few minutes left in the first to give Medicine hat  3-1 lead after 20 minutes.

Despite being up in shots 16-6 and having many other good looks that went wide, the Tigers were only up 3-1.

Ethan Cap would make things tighter in the second with his fifth on the year.

Jaeger White gave the Tigers their two-goal lead back 2:33 later with his 10th, but Edmonton would again get back to within one thanks to 18-year-old forward Brian Harris’ third this year.

Edmonton, who continues to show that they can play with anyone, despite their record, potted two in-a-row to tie the game at four.  Colton Kehler with his 30th and Conner McDonald with his eighth provided the honors.

Unfortunately for the Oil Kings though, the Tigers have more than just Mark Rassell. Rookie forward Josh Williams provided the game winner with 6:27 left on the power play and James Hamblin provided some insurance, also on the power play.

Overall, the Tigers went three-for-six on the man advantage, while the Oil Kings only had one power play and were unable to score on it.

Medicine Hat has won all six games in the season series, by a combined score of 30-15.

The Tigers are eight points up on Lethbridge for the Central Division lead. The Hurricanes lost tonight 3-1 to Red Deer. The Tigers have just four games left, while the ‘Canes have five. That brings the number of combined points for-points against to clinch down to three.

One of those games for Medicine Hat will be Saturday in Red Deer. The Oil Kings host Kootenay on Sunday.

Austin Strand had 15 goals over 199 games, coming into his overage season with the Seattle Thunderbirds (32-25-8-2). Friday night in Kent he scored the game winner, then provided the insurance as his T-birds clinched a playoff spot with a 4-2 win over the Spokane Chiefs (39-23-3-2), giving him 23 goals in 64 games this year. 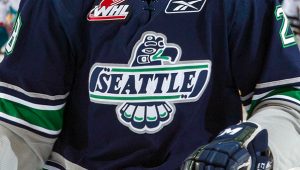 Filip Kral activated from the blue line, took a feed and toe-dragged around two two Thunderbirds, before beating Liam Hughes for his eighth this year, to open the scoring.

Seattle knotted the game with 2:56 left in the opening frame.

Zack Andrusiak shot from the slot and we’ve become accustomed to seeing it go straight in. Instead the puck bounced off a Spokane defender and got by Chiefs goalie Donovan Buskey. The goal was the luckiest Andrusiak has scored this year and his 32nd overall.

Riley Woods got Spokane back on top with his 22nd this year in the second. This one came on the power play.

Andrusiak added another goal, his 33rd to tie the game again, this time at two apiece.

Strand then potted his two difference makers and Seattle took the only two points on the night. Seattle is now guaranteed the playoffs but has its sights set on the first wild card spot. They remain just one point behind Tri-City for that spot, as the Americans beat the Vancouver Giants at home. The Am have one game in hand on Seattle.

The Chiefs wasted their game in hand and remain six points back of Portland for second in the U.S. Division with only five games left. The two teams do play one more time – the last game in the regular season.

Spokane heads over the pass to take on Vancouver on Saturday and Seattle takes on their I-5 rivals, the Everett Silvertips that same night.