Game 4 went in Red Deer as the Rebels had a 3-0 series lead. Brandon was looking to extend the series as they faced a sweep.

The first period started off right for the Wheat Kings as they were first to hit the board, on the power play. Red Deer answered right back with Kevin Marsh’s fifth goal of the series.

Only one goal was scored in the second period and it was a short-handed goal by Jason Chimera for the Wheat Kings. They led 2-1 after 40 minutes.

Late in the third period, the Wheat Kings scored and then added a short-handed empty-net goal to take a 4-1 lead. There were 49 seconds left in the game.

Unfortunately, the Rebels could not score the tying goal and the Wheat Kings had their first win of the series. 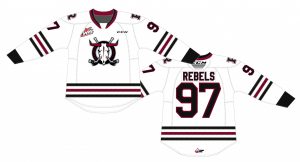 Red Deer had a 2-1 series lead heading into the fourth game, held in Lethbridge.

The Rebels came out firing on all cylinders, scoring three times in the opening 20 minutes. Justin Mapletoft, Martin Erat, and Devin Francon all tallied, Mapletoft’s goal came on the power play.

Lethbridge held off Red Deer in the middle frame but could not contain the Rebels in the final 20 minutes.

Mapletoft had his second goal of the game and fourth of the series before Kyle Wanvig and Boyd Gordon scored power play goals to seal the game and a 3-1 series lead.

Shane Bendera only needed to make 10 saves in the Rebels 6-0 shutout win.

With the Tigers up 2-1 in the series, the Rebels needed to earn the split at home to make the series a best of three.

Red Deer got off to a fantastic start, Dustin Moore scored just 21 seconds into the game.

Medicine Hat then replied with two goals less than a minute apart. The first goal came on the power play.

Dustin Moore responded for Red Deer with his fourth goal of the series to make it 2-2 at the nine-minute mark of the first period. That’s also how the period ended.

Back-to-back power play goals for the Tigers early in the second period put the Rebels behind the eight ball. With four minutes left in the period Luke Betts answered for Red Deer, it was his first goal of the playoffs.

Down 4-3 with 20 minutes to play, Red Deer took the game to Medicine Hat. They scored three times in less than six minutes on goals from Brennen Wray and Brett Sutter. The winning goal was scored on the power play by Sutter at 5:11 of the third period. The win tied the series at two wins apiece.

Future NHL netminder James Reimer made 27 saves in the win.

Red Deer headed to Edmonton with a 2-0 series lead, allowing four goals over the first two games. Another great game from Darcy Kuemper secured a 3-1 win for the Rebels as they took a stranglehold on the opening-round series with the Oil Kings.

No one scored through the first 40 minutes as both Kuemper and Laurent Brossoit stopped everything fired their way.

Despite the Oil Kings scoring first, early in the third period, the Rebels prevailed with goals from Byron Froese and Daulton Siwak.

Froese’s first goal came on the power play with more than nine minutes left to play. Siwak scored the game-winning goal with less than two minutes to play. Froese scored his second of the game to seal it just 20 seconds later.

Medicine Hat finished seven points ahead of Red Deer in the final standings for the 2014-15 season. This gave the team home-ice advantage.

The Tigers started strong with a goal 6:32 into the game. The teams headed to the dressing room with the score 1-0 Medicine Hat.

In the second period, the Tigers fired everything at Rylan Toth. He made 15 saves in the period as the Tigers added a power play goal with five and a half minutes left in the period.

Red Deer was only able to add a single goal, in the third period, as Grayson Pawlenchuk made it 2-1 just past the 11-minute mark of the period.

Red Deer needed a win to avoid a sweep and gain some momentum for the duration of their opening-round series with Lethbridge.

The Rebels got off on the right foot with an early Reese Johnson goal. Lethbridge was able to tie the game at one before the intermission. They also scored the next goal 15:17 into the second period. This gave the Hurricanes the lead.

It didn’t last long as Mason McCarty scored about a minute later. The teams were tied at two after two periods.

Lethbridge had taken a late period penalty and Red Deer made them pay early in the third period. Brandon Hagel’s fourth of the playoffs came 28 seconds in.

The Rebels weren’t done there as Alexander Alexeyev scored his first playoff goal to make it 4-2 Red Deer. Kristian Reichel scored a late short-handed empty-net goal to give Red Deer their first win of the series.

Ethan Anders had to be solid as he made 28 saves in the win.