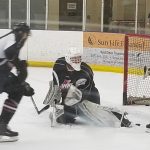 The very first weekend of June was filled with warm weather, a little bit of smoke from northern fires and the sound of skates cutting the ice.

That’s right, the Red Deer Rebels held their annual spring camp in Penhold, AB, but this time there was a bit of a twist. The team did not invite any of their most recent draft picks to participate. Much of that is due to the amount of time those players have already spent on the ice during the 2018-19 hockey season.

“Those young kids, they have long years and we didn’t want to put them through it,” general manager and head coach Brent Sutter explained.

“We thought let’s just stay with the older group and it was good. We worked on a lot of situations that occur at our level and things we need to set out as our identity. I thought all the kids handled it well.”

The list of invites was plentiful though and the Rebels staff, minus Brent Sutter, put the players through their paces. The two-hour sessions were brisk in nature and saw players engage in demanding drills, both in speed and grit. The players’ ability to work through some tough situations was on display and the prospects certainly worked hard for the staff.

Some of the standout players included 2002-born, seventh-round draft choice Jaxsen Wiebe, who played Junior A with the Nipawin Hawks of the SJHL last season, as well as 2003-born first-round pick Jayden Grubbe.

Grubbe was part of the Midget AAA Calgary Buffaloes team that participated in the Telus Cup, where they placed fourth. He played in all seven games with the team, registering two goals and three assists.

Sutter was pleased with Grubbe’s emergence over the course of the season. “As the season went on at AAA Midget, he was a really good player and in playoffs, he was very good and in the Telus Cup. We’re obviously excited about him.”

There is still work to be done though for the Calgary, AB native.