DUBNetwork spoke with 25-year-old forward Cole Ully this week and reflected on his Western Hockey League career with the Kamloops Blazers, his experience in the Dallas Stars organization and life in the minor leagues as a professional hockey player.

In Part 1, we spoke about his experiences in the WHL.

Ully, selected by the Blazers in the second round, 30th overall, at the 2010 WHL Bantam Draft, played four full seasons in Kamloops. He was named a Western Conference First-Team All-Star after the 2014-15 WHL season, a campaign where he led the team in scoring with 34 goals and 60 assists in 69 games.

Here in Part 2, we concluded our conversation discussing his professional career.

On Dec. 19, 2014, the Dallas Stars signed Ully to an entry-level contract, a three-year deal. While he didn’t skate in an NHL regular season game, he’s plyed his trade in the minors ever since. 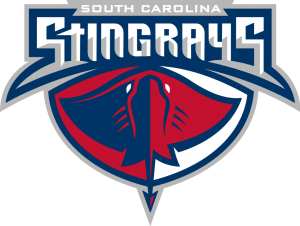 With the COVID-19 pandemic putting just about everyone into a holding pattern across North America this past season, Ully’s South Carolina Stingrays were among the many unfortunate victims.

The Stingrays were the top team in the entire ECHL, tied with the Florida Everblades with 92 points, but ahead in the win column. (Incidentally, the Everblades are coached by former Kelowna Rockets bench boss, Brad Ralph.)

It was Ully’s most productive year statistically as a pro, as he tallied 12 goals and 36 assists in 53 games before the curtain fell on the regular season.

Glen Erickson, DUBNetwork: It would’ve been exciting to be drafted, that’s what it’s all about for many players. Dallas comes calling and you wind up with the Texas Stars (AHL) for awhile, with plenty of WHL guys in the system.

CU: “Definitely, those first couple of camps, you don’t really know too much so you kind of gravitate towards the guys you know. Stransky became one of my better buddies and I actually ended up going to Dowling’s wedding, too.”

GE: Does playing under a former WHL coach make any difference when your in the AHL?

CU: “Texas had just won the Calder Cup. Willi Desjardins was the coach and he went to Vancouver (Canucks). So, yeah, Derek Laxdal came in from the WHL.

“But, I think what I realized pretty quickly is what I did in junior was almost irrelevant by then. It doesn’t carry much weight. If you’re a first or second round pick, you’ll get those extended looks.

“He (Laxdal) may have known about my statistics, but in pro hockey, it’s just so different. There’s a lot more to it. He’s getting orders from up top. So the coach, in terms of who is playing or how much someone is playing, sure he has some say, but he’s also being told what to do with certain players.”

GE: Okay, so it really is about competing and continuing to develop, I guess?

CU: “Yeah, in terms of being on the ice, I always felt like I competed hard. But you know, the window is so small. So, maybe a couple of camps and maybe 100 AHL games, if you don’t perform, once you’re out, it’s kind of tough to get back in.”

“I’m sure a lot of guys have gone through the same things I have. But I don’t have any regrets, like, I should have done this or that. I never gave up, and I haven’t given up. I’m definitely trying to work my way back.”

“I know guys who have played with Idaho (Steelheads) in the Coast (ECHL) and have worked their way back up to Texas and into Dallas.”

GE: From an earnings perspective, the financial side, how are contracts structured?

CU: “Well, after that three-year deal, Dallas didn’t qualify me.

“So I signed an AHL two-way deal with the Colorado (Eagles), the Avalanche affiliate. I had a clause in that deal where it would turn into a one-way if I played a certain number of games in the AHL, but I didn’t get there after I was assigned to Utah (Grizzlies) in the Coast (ECHL)”.

“That was just for one season. After that, I signed a one-way deal with Hershey (Bears).”

GE:  So, it was Hershey that sent you to South Carolina on that one-way deal?

GE: The South Carolina Stingrays in Charleston. That looks like a pretty stable franchise – been there almost 30 years. Some former coaches like Jared Bednar and Spiro Anastas, guys that WHLers would be familiar with. Must be a pretty good fan base there?

CU: “Yeah, 27 years in Charleston. Pretty crazy, but definitely a successful organization. And we had a really good team this year. It sucks the way it ended. We were in first place.”

CU: “Yes. I’m hoping to sign another one-way deal. If that doesn’t work out, I’ll look at signing an ECHL contract.

GE: If you sign an ECHL contract, you have some flexibility?

CU: “For sure. In that case, any AHL team can offer me a deal. If that happens, I can consider it or stay in the ECHL.”

GE: So, you’re a 25-year-old free agent now. Looking back to your 16-year-old season in the WHL, battling for ice time on a veteran team and also your father’s illness. And now, it’s pro hockey. You’ve had a pretty eventful 10 years, eh?

CU: “You know, I’m still a young guy, but yeah, some interesting experiences over the years.

“Now it’s all about hockey, about the game, you just continue to persist. For awhile there, I maybe didn’t have the motivation, I really felt down about where I was and stuff like that.

“But I think last season, that made me feel more motivated. I mean, I had an okay season, but I think it could have been better. I feel pretty motivated to climb my way back up the ladder.