On a busy holiday Monday in Canada, we head back to the BC Division rivalry that has developed between Kamloops and Victoria.

The Royals looked like they were going to run away with the season series just a few weeks ago when they won back-to-back games against the Blazers. Kamloops made it possible to earn a split their last game on Saturday. The Royals lead 4-3-0-0 and today is their final game of the season.

16-year-old Logan Stankhoven was a big part of the Blazers win on Saturday, the rookie sensation piled up four goals to move him into seventh among rookie scorers with 23 goals and 14 assists.

Keanu Derungs is the top rookie for the Royals this season. He has 13 goals and 14 assists over 48 games. The native of Kloten, Switzerland is draft eligible this season. 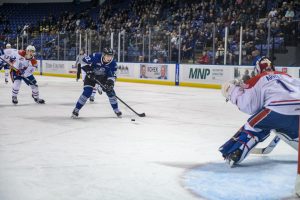 Will Kamloops’ trio of “ringers” be able to step up their offense once again? Zane Franklin (27G, 52A), Orrin Centazzo (38G, 33A) and Connor Zary (31G, 38A) are all in the top-eight of WHL scoring. They’ve struggled to score against the Royals in some of their games this season due to the stifling nature of their defense.

Victoria still struggles to score goals but has been able to rely on Brayden Tracey (18G, 34A), Gary Haden (22G, 25A) and Tarun Fizer (16G, 31A) to score goals that matter. Brandon Cutler has the magic touch though with five game-winning goals this season. Both Fizer and Tracey are out of the lineup today.

As expected from such a high powered offense, the Blazers are second in the WHL on the power play. They score at a 25.6% rate with the man-advantage. Victoria is 10th overall at 21.9%.

Both teams are pretty good at killing off their penalties, Kamloops is fourth at 84.8% while Victoria is sixth at 81.7%.

In other WHL action:

The Wheat Kings lead the season series 2-1-0-0. Regina is coming off a win over the Edmonton Oil Kings, in Edmonton. The Wheat Kings lost to the division-leading Prince Albert Raiders on Saturday night.

The Oil Kings and Hurricanes renew hostilities, Lethbridge has a regulation and shootout win over Edmonton in their two previous meetings. The teams are one and two in the Central Division standings, Lethbridge trails by six points.

The Krebs bothers face off for the first time in Medicine Hat. The Tigers have the advantage in the season series, the Tigers have won two of three games. With 67 points the ICE trail the Raiders by two points with a game in hand for the East Division title. With 71 points, the Tigers are four back of the Hurricanes for second in the Central Division and 10 back of Edmonton.

Expecting their largest crowd of the season, the Prince George Cougars look to get back on the winning track. They have lost their last three games and now trail Seattle for the final playoff spot by nine points. Red Deer won their last game on a tough BC Division road trip, they are 1-3-0-0 so far.

The Giants took the only other meeting between the two teams on Saturday, 6-2. The Giants have won nine straight games to pull themselves to within two points of the Victoria Royals for second in the BC Division, despite their below-average start to the season. Seattle has lost two in a row and are two points back of the Kelowna Rockets for the first playoff spot.

The Hitmen enter the contest on a two-game win streak. They are now six points behind Medicine Hat for third in the Central Division with a game in hand. Kelowna is in tough in the Western Conference, they are just two points up on Seattle for the first wild card spot but trail Vancouver by 10 points for third in the BC Division.