Bowen Byram’s career with the Vancouver Giants may be over as he heads to Colorado for NHL training camp.

Byram played 188 games for the Giants and was a staple on the blueline for parts of the past five seasons after being drafted third overall in the 2016 Bantam Draft.

Now the question has to be asked, is he the greatest defenseman to ever suit up for the Giants?

Byram is among the franchise’s best when it comes to goals, assists, and points by a defenseman. His 46 goals are three behind Jonathon Blum’s record of 49, with Byram suiting up in 60 fewer games over his career. As for single-season goal totals, Byram holds the franchise record with 26 goals in 67 games back in 2018-2019. When looking at the postseason, Byram’s eight goals in 2018-2019 rank him first all-time in scoring by a defenseman during a playoff run. He ranks behind only Jonathon Blum in career postseason goals with 11. Blum scored 14 but needed 38 more games to reach the total.

Bowen Byram showed he is one of the greatest goalscorers in franchise history from the backend. Byram most likely would have beaten Blum’s totals last year, but due to a COVID-19 shortened season, he ranks second in career goals and career postseason goals. The Giants may never have another defenseman like the two-time Teddy Bear Toss goal scorer, but if this is it for Byram with the team, then he ranks as one of the greatest goalscoring defensemen this franchise has ever seen.

Giants d-man/@Avalanche prospect @BowenByram has been named @TheWHL @CanadianJerky Player of the Month for February after posting seven goals and 17 assists for 24 points in 12 games!

Byram’s single-season personal best is 45 assists which are the sixth-best in franchise history. On top of his ability to score goals, Byram’s playmaking ability was one of the greatest Giants fans have ever seen. His creativity and ability to pull double teams towards him allowed his teammates to get open for easy goals. Byram’s playmaking ability will be missed by the Giants, but their BC Division rivals may not be too disappointed as they won’t have to gameplan for him anymore. 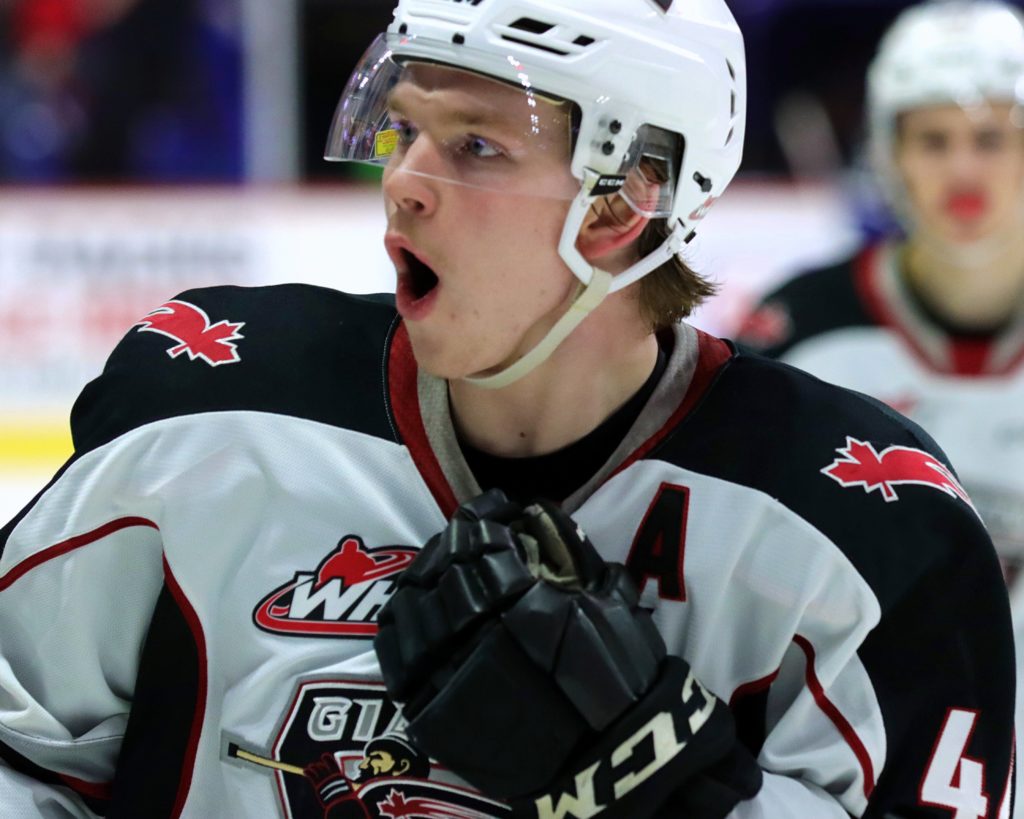 When discussing the greatest single season by a Giants defenseman Byram’s 2018-2019 season ranks at the top of the list. His 26 points in 22 playoff games that season is the greatest of all-time and his regular season of 71 points trail only Kevin Connauton’s 73 for the all-time record by a defenseman. Byram was consistent and stepped up his game in the playoffs. His offense will be missed as all signs point to him making the Colorado Avalanche this season.

During his time with the Giants, Byram was a staple with Team Canada. During his career, he played in 34 games at different tournaments with Team Canada Before his World Junior career started, Byram had already won gold with Canada at the Hlinka Gretzky Cup in 2019. As for the World Juniors, he is the only Giants player to medal twice with a gold in 2020 and a silver in 2021, and the second to be named captain during the tournament following Jonathon Blum with the US in 2009. Some may say Byram was not officially a captain in the 2021 World Juniors as Kirby Dach, who missed the tournament due to injury, was named captain before the tournament started. Byram wore the ‘C’ throughout the tournament and was the captain when Canada lost the gold medal game which means he was the captain of that team.

During the most recent World Juniors, Byram’s play was commended by the international hockey community. Not only was he named one of Canada’s top three players at the tournament, but he also made the World Juniors All-Star Team. He joins Marek Schwarz as the only Giants’ players to be named to the All-Star Team. Byram was fantastic shutting down the opposition’s best players while putting up five points in seven games while finishing second in +/- with +13. Byram showed why he is a great player this tournament and should be a staple on the blue line for Canada in the future.

Byram’s award case is already full, and he has not even played an NHL game yet. During his draft year of 2018-2019, Byram was named to the Top Prospects Game. Later on in the year, he won the Top Prospect Award given out to the top prospect in the Canadian Hockey League. During the year, he led all WHL defensemen with 26 goals, as well as playoff assists (18) and points (26). Byram helped lead the Giants to within one game of the Memorial Cup that season before they fell to Prince Albert in Game 7 of the WHL championship. During that run, Byram was also named to the WHL (west) All-Star Team.

In 2019, Byram was drafted fourth overall by the Colorado Avalanche. A decade after Evander Kane was drafted fourth overall in 2009, Byram joined him as the highest-drafted player’s in franchise history. Byram moves onto a team that is stacked on defense with players like Cale Makar, Devon Toews, Erik Johnson, and Ryan Graves. The Avalanche are going to be a good team for years to come, and Byram should be a major piece in trying to bring the Stanley Cup back to Colorado.

This past season, Byram was named to the WHL (west) All-Star Team after he put up 52 points in 50 games. Unfortunately, we never got to see Byram and the Giants make another run as the season was stopped due to Covid. The Giants were gaining momentum and had a team built with championship aspirations. Byram proved over his time with the Giants that not only was he one of the best players in the WHL but across the league as well.

Is he the greatest defenseman of all-time?

In my opinion, Byram is the greatest defenseman in Giants history. The problem is that due to the Covid-19 cancellation, we never had the opportunity to see Byram make another run to the Memorial Cup. If the season was not canceled, Byram would have had a chance to break most of the records in Giants history. Now it looks like the 19-year-old star from Cranbrook, BC may be off to Colorado, and his time with the Giants may be complete. There is a chance he gets loaned back to the team when the WHL restarts, but the chances of that are slim. I look forward to seeing what Byram can do in the future, as well as seeing him come back to the Langley Event Center when he is rightfully added to the Wall of Honour in the future.