The Western Hockey League has announced that the 2020-2021 season will begin on Friday, December 4. The novel coronavirus has caused a delay of more than two full months.

In Manitoba, the Brandon Wheat Kings have yet to set a day when training camp will begin. When they do, however, a young man from Russell has his eyes set on making the team as a 16-year-old. All summer long, Tyson Zimmer has been putting in the work in the gym as he aims to make the WHL club that drafted him sixth overall.

The delay is bound to change things around the league, but it hasn’t changed the way Zimmer is preparing. If anything, having the ability to put in some more work is a driving force. Zimmer grew up and still lives just two hours away from Westoba Place, the home of one of the most storied franchises in Canadian Hockey League history.

“This delay just gives me a lot more time to get bigger and stronger,” said Zimmer. “I’ve been in my backyard shooting like five pails of pucks a day. I’m doing everything I can now so that I’ll have my best chance possible to make the team when camp opens.”

Zimmer says that mentally he’s feeling at the top of his game.

“I’m working towards something here and I feel pretty great about what I’m doing,” he added.

The offensive side of the game has never been a problem for the young man from Russell. Playing with his home region AAA team, the Parkland U15 Rangers, in the 2017-2018 season, Zimmer scored 36 goals and added 33 assists for a 69-point total in just 34 games. Zimmer finished fifth in league scoring that season with Conner Roulette leading the way with his 101 points. Roulette now plays with the Seattle Thunderbirds and he had a great rookie season. 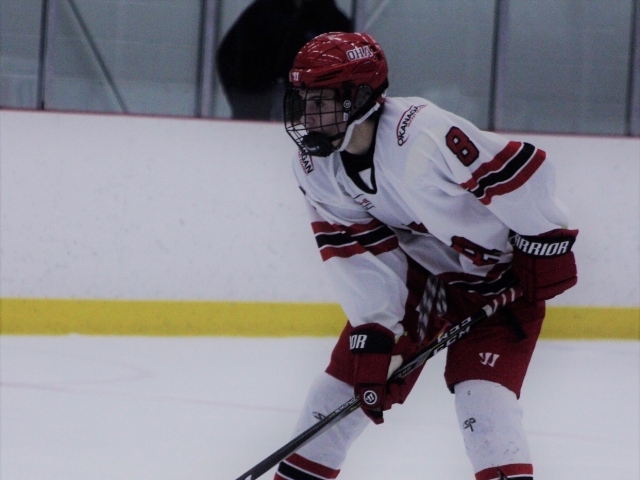 Tyson then relocated in time for the next season as he joined the Okanagan Hockey Academy U15 Prep team. In his first season with them, he posted 54 points. So add up two competitive U15 seasons and the 16-year-old draft pick had 123 points. That season was his final in the U15 ranks as he moved up to the U18 level where he joined the Academy Red Prep team. Once again, the small-town Russell native produced offensively with 41 points, 17 of which were goals.

He knows and has confidence that he can score, but to be a successful player at the next level, play in your own defensive zone is just as if not more important than the work in the offensive zone. Zimmer says the play of Sidney Crosby and Nathan McKinnon is fuelling him offensively and of course defensively as well.

“I’ve been watching a ton of their videos to learn where I should be in certain situations,” offered Zimmer. “I know I’m not going to be excellent in the defensive zone right away, but it’s something that I’m really focusing on.”

Zimmer had the opportunity last fall to take part in his first main camp with the Wheat Kings. That also included a preseason game against Winnipeg. He spent a ton of time with Luka Burzan, Ridly Greig, and Caiden Daley, just to name a few. The three mentioned are all WHL veterans and have done special things in the past. Now that Zimmer has been through a Wheat Kings camp, he’s looking forward to taking what he learned into this year.

“Those guys were really good to me, they welcomed me as if I was on the team. It really was an incredible experience and was super beneficial,” ended Zimmer. “I’m looking forward to giving it my all at camp and we’ll see where the chips fall.”

In other Wheat Kings news, Jared Jacobson will officially take over as owner and governor of the club today. He takes over from Kelly McCrimmon who was in the position for more than two decades. Jared will join Darnell Duff later this week.