As another summer draws to a close, another hockey season inches closer, and the Saskatoon Blades begin preparations this weekend for the 2019-20 season.

The Blades are entering the season coming off a heated second-round defeat to the eventual Ed Chynoweth Cup winners as Western Hockey League champions, the Prince Albert Raiders.

A few key losses this year are scoring threats in Max Gerlach (42 goals and 32 assists in 2018-19) and Dawson Davidson (13 goals and 62 assists in 68 games played) who graduated last season. The Blades could also be without 2019 third overall NHL draft pick Kirby Dach (25 goals and 48 assists), who was signed earlier in the summer by the Chicago Blackhawks.

Returning this season is goaltender Nolan Maier, who won 36 of the 53 games he started last season to go along with a 2.64 goals against average and .910 save percentage.

On defense, Saskatoon shored up its blue line by adding imports Libor Zabransky and Radek Kucerik. Both come with exceptional leadership skills, having served as captains for Czech Republic during different international tournaments. The Blades also acquired all-star and Montreal Canadiens-drafted Scott Walford. Walford is expected to have an even better year than his nine goal, 38 assist year last season, as he remains an NHL free agent and will be looking for a professional contract. The three will join returning WHL players Nolan Kneen and Majid Kaddoura, as well as defensemen Aidan De La Gorgendiere and Parker Malchuk (came over from Victoria), in camp.

Saskatoon opens its training camp on Sunday, August 25, with fitness testing, before moving to the SaskTel Centre on Monday, August 26, and Tuesday, August 27. Fans are invited to view the Blades’ pre-season tournament, the Kirkness Cup.

All players attending camp will be split into four teams, each named after Blades alumni in Braden Holtby, Wendel Clark, Glen Gulutzan, and Todd McLellan.

The tournament opens at SaskTel Centre on Monday morning with team Holtby versus team Clark on the ice at 10:30 a.m. and closes with the final being played at 4:00 p.m. on Tuesday evening.

Ice sessions are open to the public on both tournament days and admission is free at SaskTel Centre.

The Kirkness Cup is named after long-time Blades dressing room attendant, Bobby Kirkness, who was forced into stepping away from the club in 2016 after being diagnosed with leukemia. Kirkness defeated the disease after stem cell treatment and was able to return to the rink for training camp in 2016 and the inaugural Kirkness Cup.

A full list of players attending camp will be made available at the SaskTel Centre.

The Blades open their regular season with a home-and-home series versus the Raiders on Friday, September 20, in P.A. and Saturday, September 21, in Saskatoon. This will be the first two of 10 meetings between the two clubs this season.

A full camp schedule can be seen here: 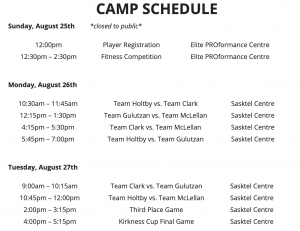