Life before the Import Draft

Well before the CHL Import Draft, the Pats dipped into the European pool back in the late 1970’s when they added Finnish players, forward Jari Helle (for one game) and defenceman Kimmo Lahtinen (4 games) in 1978-79. Helle returned home to Finland for 1979-80 but returned for 1980-81 when the Pats re-acquired his rights. He went on to score 19 goals in 39 games and play in 11 playoff games. The next season the Pats had another Finn, Esa Tikkanen as a prospect, and he dressed for two games.

In the early 1990’s Mikko Outinen and Niko Ovaska, both Finnish defencemen had cups of coffee with the Pats but never stuck. Swedish born Niklas Barklund is the first real import that really made the Pats, playing in 2 full seasons (1991-92 and 1992-93). The Pats did bring in one other European player for the 1992-93 season, Austrian Frank Vogel got into a handful of games in the 1992-93 season picking up an assist. 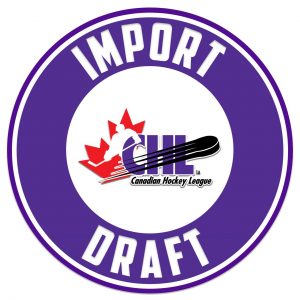 The Import Draft has been a hit or a miss for the Regina Pats. 27 of 35 players that the Pats have drafted have played at least one game for the team. A vast majority of the Pats picks come from the Czech Republic (15) and Russia (11). The Pats have also drafted players from Sweden (3), Finland (2), Slovakia, Italy, Germany, and Slovenia.

The draft is a “crapshoot”

Merriam-Webster defines crapshoot as “something that has an unpredictable outcome.” That much is true about the Import Draft, especially for the Pats.

In the summer of 2004, Pats general manager Brent Parker told Regina Leader-Post’s Greg Harder: “So much of it is a crapshoot, it depends so much on how they adapt over here and fit in with the language differences and the difference in the way the game is played, all those things. It’s a big adjustment for these kids. Some of them make it quicker than others, some of them never make it. That’s just part of it.” In that draft, he selected Martin Hanzal (43rd) and Jan Zapletal (60th). With just 5 points in 55 games, Zapletal was what many consider a bust.

Fast forward four years to 2008: Parker told Greg Harder: “Any draft in some respect is a bit of a crapshoot, but this one is such a different animal because of all the different dynamics that come into it from the money that’s paid by some franchises and the side deals. We’re talking to agents and weeding out the ones who from a financial standpoint are out of the scope of what the CHL allows.” The Pats were happy with their then-current import Rudolf Cerveny (a 2007 pick) and drafted Tomas Hricina (27th). Hricina went on to play two seasons for the Pats.

There have been some hits

The Pats have drafted their fair share of quality imports. Calling any of them superstars might be a stretch but they have had some definite stars and solid players. Dmitri Nabokov (1996), Karel Mosovsky (1998), Filip Novak (1999), Petr Kalus (2005), and Sergey Zborovskiy (2014) would be considered hits.

There have been some misses

Some homerun swings, but struck out

After drafting Kopitar in 2005, the press release from Brent Parker said, “We believe it made more sense to go after a player of his magnitude than to pick a player from the Prague phone book.”

It was time to move on after failing to secure 2019 Import Draft pick Daniil Gushchin (7th overall). The Pats took another shot and selected Czech defenceman Stanislav Svozil 15th overall in the 2020 Draft. Svozil, a top prospect for the 2021 NHL Entry Draft, has been playing professional hockey for HC Kometa Brno.

After being named the Rookie of the Year in the Extraliga, Stanislav Svozil takes home the "Czech Junior of the Year" trophy.

Svozil who wasn’t invited to play for the Czech Republic at the WJC gets more votes from officials, coaches and journalists than Dostal, Jenik, Teply…

Svozil received quite the accolades: Czech Junior Player of the Year, and the Extraliga Rookie of the Year. Svozil was also selected for the U20 Czech tryout camp. With his professional status and with the uncertainty of the world right now, the likelihood of him suiting up for the Pats any time soon is highly unlikely.

Stanislav Svozil spent most of the year with Brno of the top Czech league and is expected to remain there for 2020-21. He's one of the top defensemen available for the 2021 draft – high-offensive awareness, two-way defenseman with great speed and skill.