Winnipeg selected sixth overall and their first pick was Jayson Shaugabay from Warroad, Minnesota, which is just a little more than two hours’ drive from Winnipeg.

Playing with the Warroad High School Warriors in the USHS-MN League this past season, Shaugabay had an exceptional season. In just 22 games, he scored 19 goals and he had 32 assists for a 51 point total. That’s an average of just above 2.3 points-per-game. 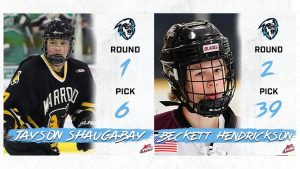 “Jayson is a highly-skilled forward with lots of upside.” said Jake Heisinger, Vice President of Hockey Operations and Assistant General Manager. “As a first-year high school player, he consistently produced offensively and was a key reason his team reached the state tournament.”

Winnipeg was next on the clock with the 39th overall pick and they selected Beckett Hendrickson from Minnetonka, Minnesota. Minnetonka is a suburb of Minneapolis.

Just like Jayson, Beckett had a huge season. He scored 52 goals with the Minnetonka Skippers Bantam AA team. He also added 62 assists for a total of 114 points in just 43 games. That’s an average of 2.65 points-per-game.

“Beckett comes from a strong hockey background which will be a valuable resource in his development,” concluded Heisinger “He is a skilled player with very good hockey sense which allows him to create opportunities for himself and his linemates.”

ICE fans have a lot to be excited about with their new U.S. prospects. Negotiations will continue to have them signed to Standard Player Agreements.