The WHL Championship banner was raised and the Swift Current Broncos class of 2017-2018 was honoured. It was the perfect closure to last year and a brand new beginning for the team of 2018-2019.

The regular season started in front of another sold out crowd as Alec Zawatsky, Kaden Elder, and Ethan Regnier led the team out front while Noah King and Connor Horning were the defensive starters. Joel Hofer opened the season in net. Ryan Pouliot, Kaden Elder, and Tanner Nagel donned the letter “A” on their jerseys, but no captain has yet been named. Scratches for the evening included Roope Pynnonen, Artyom Minulin, Colum McGauley, Carter Spenst, and Andrew Fyten.

First Period
It was an evenly matched first period as the Swift Current Broncos came out flying. The Saskatoon Blades held back a little bit in the beginning, but they quickly stepped it up. The Broncos laid the first hit as Sam Pouliot made a big hit along the boards early in the game. There were no lack of chances for both teams as Ethan O’Rourke, Ben King, and Eric Houk each had shots on net. Tanner Nagel proved he’s ready to play at any cost when he laid a huge hit and blocked a shot in the defensive zone. In spite of power play chances by both teams and 12-5 in favour of Saskatoon, the clock was scoreless after twenty minutes.

Second Period
The Blades tried to get physical with the Broncos, but the Swift Current team pushed back as Noah King slammed a player into the boards in retaliation, showing Saskatoon that they won’t be shoved around. Max Patterson, Kaden Elder, and Alec Zawatsky stood out the most during the middle frame, skating hard and digging harder. Their impact would pay off later in the period when Elder made a drop pass to Patterson, who took a shot but couldn’t score. Zawatsky picked up the rebound, but couldn’t bury it either. Then Elder swooped in once again to surprise Nolan Maier in net and notch the first Broncos goal of the season. It was 1-0 for the home team, but not for long. A few seconds later, after a non-call on Max Gerlach after he slammed Connor Horning into the boards in a questionable hit, Gerlach would capitalize on a breakaway and tie the game. Quinton Waitzner would throw a few punches for the first time this season after an attempt on the Blades net, but nothing much came of it except a bit of time in the box. With the shots on goal 11-8 in favour of Saskatoon again, the score was tied 1-1 after 40 minutes. 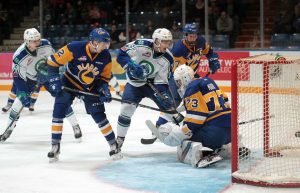 Third Period
The Saskatoon Blades opened the scoring in the third period with a breakaway attempt that they couldn’t capitalize on, but their momentum continued. The Swift Current defense worked hard to keep the Blades at bay, but it was only a matter of time until the Blades broke through. An early goal gave Saskatoon a 2-1 edge and the Broncos wouldn’t be able to recover. Kaden Elder tried to recover the team’s momentum that was obvious in the first 40 minutes and Joel Hofer stood solid in net, but it wasn’t enough for the Swift Current offense to make a comeback. The Blades Max Gerlach was practically handed a hat trick, but he missed the open net at the end of the game and the score was finalized 2-1 for Saskatoon. Joel Hofer stopped 34-of-36 shots on net.

Best Plays
The standout line throughout the game was the line of Tanner Nagel, Matthew Culling, and Max Patterson. Their positioning in front of the Blades net was good, their puck possession was better than expected, and Matthew Culling added a good dose of speed to a physically bigger line. Max Patterson has refined his skills since last season and looks more confident as a veteran. And Tanner Nagel’s leadership skills were on display throughout the entire game.

The Broncos penalty kill also looked sharp and no goals were allowed on any power plays. Swift Current’s positioning on defense was the key to their success during the PK. When they faltered (which wasn’t often), Joel Hofer was a solid wall protecting his net, making important saves during significant moments, proving his dependability.

Final Thoughts
The Broncos won the WHL Championship last season in part because they had great depth. Those depth lines and pairings have now become their impact players. And those impact players showed their ambition and hunger to win in the opening game. If they can keep up their momentum and ambitious plays, this could be a successful season for the reigning WHL champs.

Next Game
The Swift Current Broncos are on the road Saturday, September 22nd as they head to Saskatoon for a rematch. Puck drop is at 7pm at the Sasktel Centre.