The Saskatoon Blades have clinched a playoff spot for the first time since 2013 when they hosted the Memorial Cup. The Blades were coming off their first regulation loss in 13 games after dropping Friday night’s game 6-2 to the Brandon Wheat Kings. This is also the second time in three weeks the Blades had a back to back where they played the previous night in Brandon, which is 620 kilometres away. Kootenay was coming off a 4-0 loss to the number one ranked Prince Albert Raiders. For the longest serving Blade Chase Wouters, this playoff berth has been a long time coming.

“Yeah it’s something I’ve looked forward to ever since I got drafted to Saskatoon when I was 14, it’s a pretty surreal feeling knowing we’ll be in the playoffs” said Wouters.

It is Mitch Love’s first year with the Blades and he is no stranger to the playoffs coming from Everett where he made the dance eight straight seasons.

“It’s an accomplishment for the players for sure, as a staff you work all year to put yourself in a position to play in that second season.”

A nice rush by started Eric Florchuk (WSH) opened the scoring for the Blades. Florchuk picked the puck up in the neutral zone and took it around the net before finding Kristian Roykas-Marthinsen (WSH) for his 12th goal of the season. Chase Wouters won an offensive zone faceoff to Brandon Schuldhaus as he spotted a wide open Gary Haden who potted home his 28th goal of the season. The ICE responded just under four minutes later as Jaeger White went in one on one and took a shot through the legs of a Blades defender as the puck squeaked through the legs of Blades Goaltender Dorrin Luding. 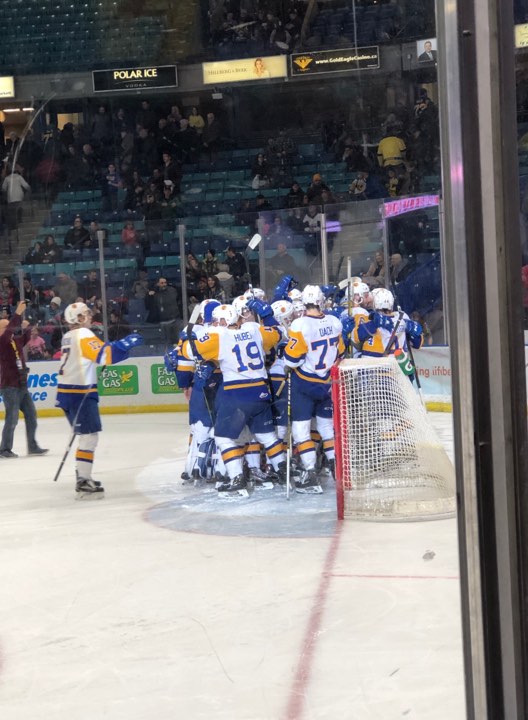 In the second period, Jesse Makaj stood tall stopping both Ryan Hughes and Riley McKay on breakaways. However, it was Reece Harsch getting the best of Makaj as Hughes fed him across the ice and he scored over the blocker. Hughes continued his playmaking later in the second when he hit Kirby Dach for a wide-open net who shot it across the crease. At the end of the second; Dawson Davidson caught an errant stick to the face and stayed down on the ice and left under his own power. The Blades outshot the ICE 17-6 in the second.

In the third period, it was a different Kootenay team. The ICE dictated the play for most of the period and were rewarded early on for their efforts as Brade Ginnell was able to sneak one under the pad of Luding. Three minutes later the Blades got caught on a line change as Jakin Smallwood got over the blue line and rifled a shot over the shoulder of Luding and the game was tied.

In overtime Eric Florchuk was called for holding just 22 seconds in. The ICE were unable to capitalize on the four-on-three man advantage due to some strong play down low by Chase Wouters. In the building, the Prince Albert Raiders win over the Brandon Wheat Kings was announced, with the point being the Blades had officially clinched a playoff spot which garnered a round of applause before the shootout. In the shootout, 2019 draft prospects Kirby Dach and Peyton Krebs were both stopped in the first round. In the second round rookie forward Kyle Crnkovic was able to open up Jesse Makaj and get the winner. The 6-2 loss Friday in Brandon followed by the two goal lead given up Saturday was a step back for the team according to head coach Mitch Love

“For whatever reason, we were out of sorts all weekend, I didn’t like our game, I thought we were too loose defensively, we had poor execution, we didn’t want to work for things or stop on things, this time of year you have to do those things.”

This game was the last time the Blades will face the ICE as ‘Kootenay’ as they move to Winnipeg next season.